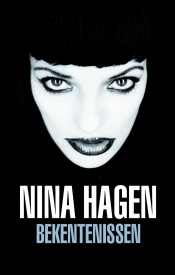 Today, Li-Xia and I went into the city. In bookshop De Slegte I walked around with the last copy of Colloqia by Erasmus because I thought about buying the whole serie. For the other three volumes there were still enough copies available. Each volume costed € 14.99. The original price was €29.50. After a lot of doubting, I put the copy back, afraid that I never would come to reading the books. There are still so many books on the shelve that I haven't read yet. Next we went to bookshop Broekhuis. There I found Bekentenissen (Confessions) by Nina Hagen and decided to buy it. At Om 13:48:06, I bought it for € 19.90. We also looked around on the third floor where there were works by Maria Kapteijns for an exhibition that will be opened next Saturday.

This afternoon, around four o'clock it started to snow. It snowed for about three hours, also when I biked home. It resulted in about two inches (5 cm) of snow. When I saw my neighbour clear away the snow, I went outside and also did some part.

This morning between eight and nine there was some light snow. Around noon, it started to snow again, but it was mainly wet snow as temperatures where slightly above zero (Celsius). But during the afternoon, a cold front front from the North swept over the country and we got below zero temperatures again. Af the end of the afternoon, when I left for home there was again a layer of snow (a few cm, I guess). But a bigger problem was that many of the roads had become slippery because of the wet snow that had become frozen. I noticed one car being stuck half way on the ramp out of a tunnel.

Today, especially the West of the country was hit hard by snow. It started in the morning and lasted till the evening, causing many traffic jams. Only in the afternoon, it started to snow in Enschede. But not more than two inches (five cm). The roads where less slippery than yesterday. But the soccer match between F.C. Twente and Heracles was cancelled.

I went into the city with Li-Xia. We also went to bookshop De Slegte. There I was told by one of the people there, that the cupboard for new arrivals was no longer in use. All interesting books are now also put on their website website, and then placed in the right cupboard immediately, so that they can locate them quickly, when someone places an order. At 12:44, I bought the book Metrokaarten van de wereld by Mark Ovenden for € 4.99 (ISBN:9789058975836). 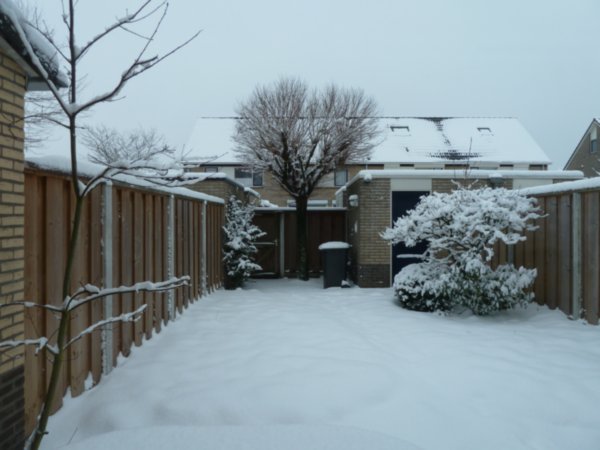 During the night we got another two inches (5.5 cm) of snow. I took a picture of our back garden. Our magnolia tree (on the right) is covered with snow. At the start of the evening it started to snow again and another three inches (8 cm) of snow was added. 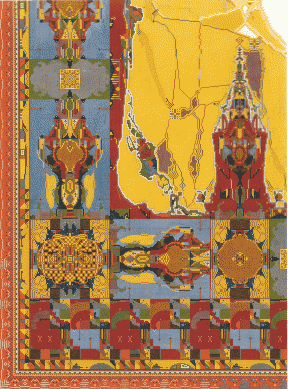 The image shown on the right looks very similar to the one shown on Sunday, November 28. The image is produced with the newest version of the MySample editor that I worked on in the past weeks. (To reduce the size of the image, the number of color has been reduced to 64 using XnView.) It now is able to load and save images using the GFL SDK when the libgfl311.dll can be loaded. I also implemented a script language. When F5 is pressed in a file with the scr extention, the contents of the file is parsed and executed. The image is generated with the use of the script below. Only that part of the script language that is needed for this script has been implemented. The script is compiled to a tree of objects, where each operations is translated into one object that has an evaluation method. The script is executed by calling this evaluation method on the root object. Each use of a variable references the object for declaring the variable, which contains the storage of the variable. The script below takes less than a second to produce the image shown here. The sources for MySample can be found here.

This evening, we had an informal reception with some people from the office in the city. Li-Xia and I did not stay long. We walked to bookshop De Slegte where I found the book Extremely Loud & Incredibly Close by Jonathan Safran Foer (ISBN:9780141025186). At 18:58, I bought it for € 4.50. 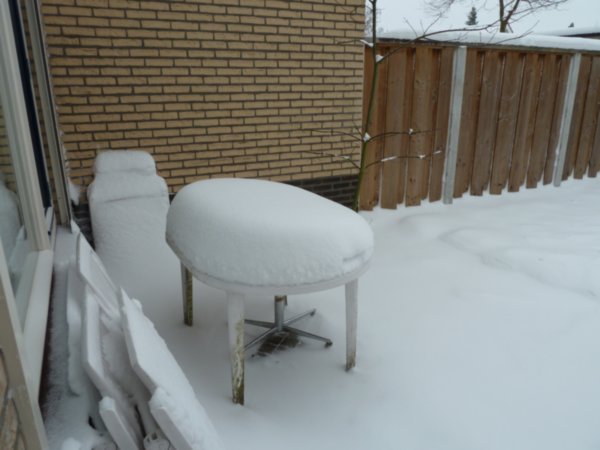 Last night and this morning, it was snowing again. There was also was some snow that cause the powdery snow to be uneven deposited. At the end of the morning, there was about 20 cm (8 inches) of snow on a table outside in our back garden, as can be seen on the picture on the right. We have had snow cover at least three weeks now, which is extremely long around where we live. Many Dutch begin to doubt the existance of global warming, but it could well be that we get this colder winters because of a change of circulation patterns induced by the global warming.

That we were going to have a white Christmas had been clear for some days, or maybe even some weeks. This morning, I had to clear the car from 2 cm of snow that fell during the night. The sun was shining when we drove to my mother where we were going to stay for the rest of the day. The roads where clear, but at some places there were holes caused by the frost. At my mother place, in the middle of the country, there was less snow than with us in the East. When went home shortly after nine in the evening, there was some snow again. 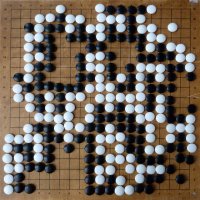 Today, I went to Wintergo, a five day Go tournament in relaxing atmosphere. Only one round per day is played with a maximum playing time of one hour per person. And besides this a lot of games are played. This afternoon, I played against Huub and I won by 13½ points. He has become stronger in the past year because he enlisted himself as 11 Kyu for this tournament. I enlisted myself as 10 Kyu again. Although we had an hour playing time, we both used about half an hour.

The image shown on the right, was processed with a script executed by MySample from a picture I took at the end of the game. The script performs some lens correction. For this, I had to make some slight improvements: adding the square root function. I have worked on MySample again in the past week. 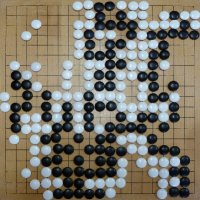 This morning was the second round of the Go tournament. I had to play against a young men who rated himself as 9 Kyu for the tournament. In the middle of the game, a group of mine was killed, and I could have give up, but we continued the game to the end after which I congratulated him. We did not count the points. In the afternoon, I visted Susan, who I worked with at the university. It was a long time ago that we saw eachother. We talked a lot and I showed her some pictures and video's. In the evening, the game Atlantis was played in the main room. This game was invented by Martin Medema. 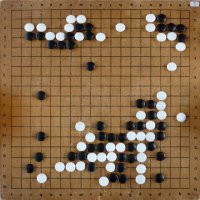 This morning, my Go game in the tournament, did not go very smooth, and I decided to resign my game against Gulya after move 85. Afterwards, I replayed the game myself, and I think I did reconstruct the game record quite accurately (SGF game record).

In the evening, we had curly kail according to a more than 200 year old receipt. It included some peas, about half the amount of the curly kail. It was served with some meat and a little sour salade. 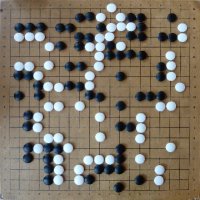 This morning, I introduced Symple and played a game against Bart, which we could not finish because the next round of the Go tournament started. Surprisingly, I was paired with Bart. We played a very relaxing game with a lot of good moves. But against the end of the game he, and I too, did not realize that a certain move would cause some of his vital stones to be atari. We continued a little, but he resigned. We made some attempt to replay the game, but did not come far. I made some attempt myself, but did not feel very sure of the order of the moves (SGF game record). 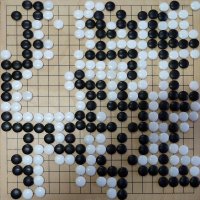 Staying concentrated till the end

This morning, the last round of the Go tournament was held. I played against Hans. It was an interesting game with some good fighting. In the very last part of the game, namely, the filling the dame points, I overlooked that an atari, and Hans captured 13 stones. He immediately said that he would have warned me during a normal game, but that a tournament game required one to stay concentrated till the end. He acknowledged that I had been the stronger player during the game. The picture on the right showed the situation of the board, just before the stones where captured. I lost with 10½ points. I felt happy with my two out of five result, and the fact that I helped him to win a bottle of wine, becaused he scored four-out-of-five, made me happy too. But what is far more important is that we had some good talks about during the past days. This months interesting links
Home | November 2010 | January 2011