Today, I started working with a new company. At 11:42, I thought I saw part of the top a rainbow. I had some doubts because of the time of the day. At home I verified with SunCalc.org that at given time and location the sun was 30.6° above the horizon, which means that a rainbow can be seen, where the top is at about 11° above the horizon. This matches my observation.

Today it is 25 years ago that Li-Xia and I got married. This morning, I published a 'love letter' in Dutch on social media. The English translation of this letter is:

today we are married for 25 years and we celebrate our silver wedding. For a long time it was uncertain whether you would still be physically present at this day. Despite the fact that you are no longer able to conscientiously experience this day, I still want to celebrate it with our children (in a simple way). You are a very special woman and I am glad that I got to know you and that we were married 25 years ago. We did not have an easy marriage. Our characters often clashed (especially in the early years). Such a clash often ended in a deep sense of how much we loved each other and that we would never let each other down. In the past year I realized that we have experienced a form of intimacy that very few couples experience. Perhaps we would never have achieved that without all the difficulties we encountered on our path. When I told our story a few months ago, a woman who came from America, she concluded that we were 'soul mates' in her eyes. I had never looked at it like that before, but I think she is right about it. You are and will remain my wife and the mother of our two children, which I am very proud of. I am still very proud of you, as I was when we were just dating.

In the evening, I took Annabel and Andy to a wok restaurant to have a dinner together to celebrate this. The following picture was taken there: 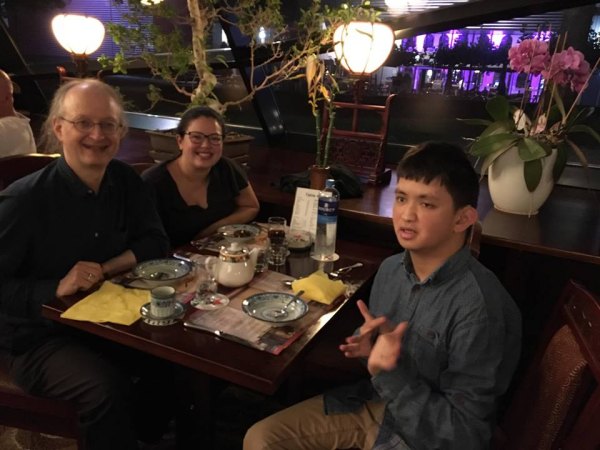 At 5:30 (in the morning), Li-Xia died in the presence of some people taking care for her. She died rather quickly and peacefully, while being held asleep for medical reasons.

The funeral service for Li-Xia started at 9:30 (in the morning) at the crematorium in Usselo. We only invited family and friends (of Li-Xia) who had taken the effort to visit her in the carehome where she stayed in the past years. Of course, Annabel, Andy, and my mother were present. And also our long time friends Bert and Cornelise. Because, Li-Xia's family could not be present, a recording was made of the service. We asked a professional photographer to take picture before, during and after the service.

Because of the extreme warm temperature of the last days (Wednesday 24.1°C, Thursday 24.2°C, Friday 24°C, Saturday 27.7°C, Sunday 25.8°C, and today 24.4°C), I decided to get an icecream in the center of the city. I continued to TETEM art space, where I saw the exhibition Do It Together Neighborhood (for the first time) and Bits, bots and brains (again). From the last exhibition, I liked the works drawn by Maria Smigielska and Les Colchiques by Pierre Cutellic.

I got the idea to apply the ideas given in Machine independent implementation of Cooperative Multi-threading in C to parallel parsing. Each alternative in a parsing rule can be viewed as a separate process that stops at characters to be processed. In case a rule contains a non-terminal, this means that a subprocess needs to be started. There are actual two ways to implement this, based whether one want to start with the elementary grammar rules or use the extended grammar rules. In the extended grammar rules keywords are used to describe optional, sequential and grouping of grammar symbols, for which one otherwise would have had to introduce separate non-terminals, often resulting in a large number of non-terminals and passing of intermediate results. A better approach seems to have one function per non-terminal (for the extended grammar rules) and clone the data structure for each variant. I still have to work-out all the details. Maybe some kind of preprocessor would be handy with respect to all the book keeping with respect to label names for the goto statements.

Today, I received the PS2 adapter for the Gigatron, also known as Pluggy McPlugface. The package also include ROMv3 with TinyBasic and some more programs.

I first went to Eye Wish and decided to pick a new pair of glasses for the 'reading' glasses that I had selected some time ago. This means that I will be carrying around four pairs of glasses. My old glasses, which I mainly use when I go to see a movie, a pair of sun glasses, my current glasses which have a +1.25 dioptre correction, and the new pair of glasses, intended to be used while sitting behind a computer, which have a +1.75 dioptre correction. Next, I went to bookshop Broekhuis, where at 13:43:17, I bought a Moleskine plain notebook with a black, hard cover, which I am going to use as my new personal diary, when my current personal diary is going to be full. At photo gallery Objektief, I saw the exhibition Ida - Reines with photographs by Jelle Pieter de Boer. I went to TkkrLab and soldered the PS2 connector for the Gigatron computer. I was not totally satisfied, because after I soldered the PS2 connector, I discovered that it was not really straight as it should have been. I went back to Eye Wish to get my new glasses. In the evening, Annabel and I made jiaozi and we watched the AlphaGo movie on Netflix. We both found it very interesting to watch. Although, I did follow it in detail and new the outcome of the match, I still found it exciting to watch. The movie does not focus on the details of the game, but on the people involved and their emotions. It shows a lot of what went on behind the scenes.

This afternoon, I tested the Pluggy McPlugface PS2 interface for the Gigatron computer that I received earlier this week and soldered together yesterday. I had some problems with the power supply before I got it to work. Seems that the best approach is to plug in the PS2 keyboard after the Gigatron had started. I loaded the Basic interpretter from the microcontroller on the Pluggy McPlugface and played a little with it. Later, I replaced the Version 1.0 ROM with the Version 3 ROM and played the Tetronis game and got a highscore of 10175. This new ROM is really an improvement turning the Gigatron in a little home computer with Tiny BASIC. This months interesting links
Home | September 2018 | November 2018