Yesterday, while guarding the entrance for the retro game day, I looked at the problem of finding at the 35 vectors. I have been looking at finding collections of eighteen vectors at the Haming distance of four from a vector. The reason why there are eighteen is because there are only six ways to change two of the four zeros into ones and at most three non-overlapping pairs of ones that are changed into zeroes. I realized that there are some restrictions as to how for three patterns of zeros that are changed into ones that only differ at two locations, such as for example, 1100, 1010, and 0110, the way the ones are changed into zeros must all be different. Because if they are the same, the Haming distance is only two. I got the idea that there were only four configurations, not counting all kinds of symmetries. But when I was at home, I wrote a program, which produced 19 solutions. Which meant that either I was wrong or the program. Today, I wrote the following animation to display the 19 solutions. The three colours refer to the three ways in which zeros are changed into ones and the three lines refer to the patterns in which the ones are changed into zeros. Any of the 21 possible lines cannot have two colours and there cannot be a point where to lines of the same colour meet.

In the evening, I realized how there eight combinations of three vectors, such as in the example, and that these can be visualized as the triangles of the octahedron. And also that each edge represents the lines of two colours and that there are only three possible patterns of these, namely, where the lines are a cycle of six lines, a cycle of four lines and a path of two lines, or a path of six lines. This put a lot of restrictions on how the various patterns can be placed on the octohedron, and that that is a good way to determine all unique (with respect to symmetries) combinations of 18 vectors there are.

Today, my mother became a great-grandmother, because the oldest son of my youngest sister became a father. It also means that I have become a granduncle. 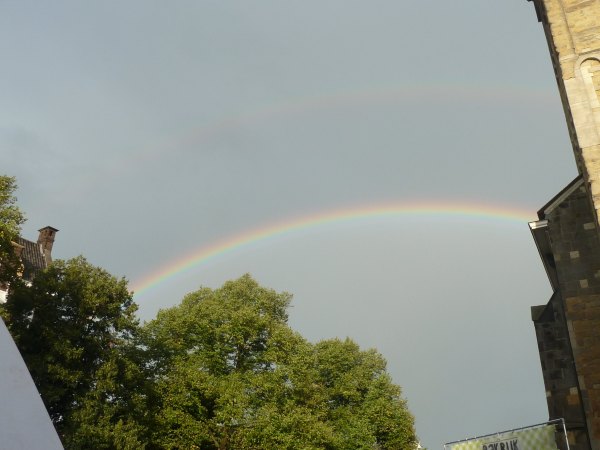 While waiting with some other volunteers for the introduction tour along all the locations of the Gogbot festival, we saw a rather bright, double, and complete (as far as I could see) rainbow. I took several pictures, one of which is shown to the right. After the opening, at eight, I helped out as a guard in the Grote Kerk because there were a lot of visitors. I stood near the entrance, close to The Mictobial Vending Machine by Emma van de Leest, one of the few artist being present at the exhibition in this location and explaining her project to visitors. Also close were the Pink Chicken Project, Al¿ve, and Caravel. There was not much interaction or moving projects as in some of the previous years and several vistors commented about this to me while leaving the venue. At eleven, after the exhibition closed, I went to the Metropool concert room to have a peek at the Gogbot lift off // Experimental Electronics & Modular Night, which was free for volunteers, only to discover that they had very strict rules with respect to bags and coats, and that the small lockers costed two Euro each. I was a little disappointed, because I had hoped to work a little on my notebook while listening to the music, and decided to go home.

I was a guard at the former VVV-building. The first half on the second floor and the second half on the third floor. These floors had all the Young Blood nominees, selected from the graduates of the various art academics in the Netherlands. I found the following nominees mentionable (roughly in the order I encountered them at the exhibition):

The building also had the projects by the freshman students of the Creative Technology major of the University of Twente. I used the Embry-o-'matic to 'create' a designer embryo from Stork Industries. Mine was #10293 and I had to 'pay' $4929. In the evening, I again, helped out at the Oude Kerk, because some volunteers wanted to have dinner and one did not show up (or left early).

I continued working on the 18 vectors problem (which is related to the KABK wrapping paper) and this evening, I worked on a program to calculate the number of unique ways the octahedron can be tilled with the 19 patterns I found on September 1. I arrived at a program which calculates in how many ways the edges can be marked with on of the three possible patterns, such that they are compatible with the 19 patterns. Such a 'constellation' does not neccessary match a solution of the patterns and even if it does, there could more than one. The program found 1773 such constellations. When at home, I thought about a different approach for finding the solutions for the 18 vectors problem.

I recieved the book Kilo-Girls written by Julia Luteijn in English, which I bought from the author for € 13.90 (including postages).

I went to Tetem art space to look at the exhibition Xenobodies in Mutation. At the Exploring-Lab some people were assembling a small motor powered by solar cells. I also joined and assembled one.

I continued working on the program to calculate the number of different solutions of 18 constant weigh vectors 'around' a vector with seven ones and four zeros, where around means at a Haming distances of four and such that all vectors are at distance of at least four. The program found 54718 different solutions taking in consideration all possible permutations of the 'rows' of the vectors.

With the results of last Sunday, I tried to find the 35 constant weight vectors for A(11,4,4) as mentioned in a table. I did this by starting with the 54718 solutions consisting of 19 vectors and try to extend it further. The program found 46080 solutions (possibly containing doubles and missing some) consisting of 30 vectors and non with more than 30 vectors. It looks like a dead-end. Which actually does not surprise me, because requiring that 18 vectors will be close to one vector, might force them to be spread apart too far and in a some what regular manner, that no space is left over to select the remaining sixteen vectors from.

It felt like spring today. At the end of the afternoon, it was much warmer outside then inside. Temperatures reachted 26.6°C at weather station at Twente Airport. The garden looks very green again compared to a few months ago. It seems that the leaves of the small chestnut tree have withered. I hope it has not died. I tried to water it through the summer when it was dry, but I might have forgotten it.

Walking at Night in NYC

I watched the Walking in Heavy Thunderstorm at Night in NYC video and tried to figure out the route the maker took. I discovered that there are six segments in the video (and a very short one, that I do not count). With Google Earth I made a KML file of the routes of each segment. It seems if the maker made two walks starting from East 34th Street and Park Ave, and that he alternated the segments from these walks, one in order and the other out of order.

I went to see the Flap Flap installation by Philip Vermeulen at the University of Twente. I was a little late for one of the performance, so, I only watched the last third of it. I did not have time to wait for the next performance.

I joined the FPGA course at TkkrLab organized as part of the bimonthly CyperSaturdays. The course was developed and given by Paul Honig from RevSpace and is based on the UPDuino v2.0 sold by Gnarly Gey. The course started with the elementary priciples. During the course, we mostly focussed on programming the (very bright) RGB-led on the board, but sources for reading the digital temperature sensor (DS18B20) are included.

In the evening, I went to Allée Rentrée festival with art and music. He liked the following:

I joined the opening walk of Fotomanifestation Enschede. The theme of this photo manifestation is Inner Circle. The first exhibition is Sistaaz of the Castle by Jan Hoek at Fotogalerie Objektief. It is about seven transsexuals in Cape Town. In the galery there were also small mobile gardens in old soccer balls or baskets. The organization to support them is Support Sistaazhood. Next we went to Concordia for the exhibition What Goes Up by Sylvie Zijlman. Upstairs, I also had a look at the exhbition Untitled Surface by Filip Markiewicz and watched part of the movie Fake Fiction. At bookshop Broekhuis, the exhibition Geachte Afwezige... with photographs by Paul Hajenis was opened. At Rijksmuseum Twenthe, there were two exhibitions part of the walk: Where Will We Go by Kadir van Lohuizen and Setting The Stage by Eddo Hartmann. From this last exhibition, I did like the picture Housewife Somun Street, Pyongyang, 2015 the most. While at the museum, I walked through the exhibition Tischbein en de ontdekking van het gevoel but did not pay much attention. I did get interested by the associated exhibition by Melanie Bonajo, the photo collage Thank you for hurting me. I really needed that... and some video. I also had a second look at the exhibition of works by Peter Zegveld and verified that some of the horns in one of his installations were in the incorrect order. Of course, I also took some time to look at Falaises près de Pourville by Claude Monet and Gezicht op Louveciennes in de herfst by Alfred Sisley. The last opening, was at Het Arendsmanhuis. It was the opening of the exhibitions Charlotte and Emily Salvia by Linsey Kuijpers. This months interesting links
Home | August 2019 | October 2019