Formalisation of the game Havannah 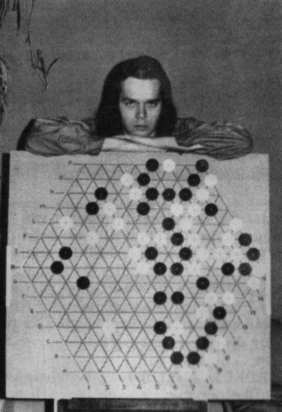 This pages gives a formal definition of the rules of the game Havannah, which was invented by Christian Freeling. (Havannah on Wikipedia. Alternative formalization). It is a connection game in the class of symmetrical board games with complete information. Despite its simple rules, it is a game with unexpected depth. The combination of strong strategical element, and yet rather simple rules, make the game into a good candidate for a test case in game playing theory.

Note: In 2002, Christian has put a reward of 1000 euros for making a program for the game of Havannah, that can beat him 1 out of 10 games within the next ten years. He lost this bet.

Description of the game

In turn, the players place a stone of their colour on one of the unoccupied positions. Once a stone has been placed on the board, it remains there until the end of the game. This means that stones cannot be moved or beaten. For that matter the game can also played with paper and (coloured) pencils. See this PostScript file or this PDF for a board where the positions are represented by circles. Or this PDF with six boards on one page.

Representation of the board

The set of points on the board can be defined using: In this definition we start with a cube of points and take the points that are on the intersection of a plane, that goes right through the middle of six of the ribs, creating the desired hexagonal set of points.

The coordinates with which the points are defined have a degree of freedom of only two. This means that each of the elements can always be calculated if the other two are known.

(This definition is used directly in the definition of distance, neigbour, neighbours_of, corner_points, and side_points below.)

We can define the distance between two points as the length of the shortest path between the points. We can do so using: The sum of absolute differences of the coordinates is always even, because the degree of freedom is two. The points with the same distance to a given point are on the imaginary hexagon of which the corners are on the lines through this point and on the given distance.

(This definition is used directly in the definition of neigbour and cycles below.)

With this definition it is also possible to define the neighbour relation:

(This definition is used directly in the definition of neigbour and cycles below.)

And a function that returns all neighbours of a point:

The points on the board can be divided into different kinds. Two of these kinds are the corner and side points. These we can define using: With this definition we have established the board and some of its properties.

Connected groups of stones play an important role in the game. For this reason we give some definitions concerning groups based on the neighbour relation.

First we define the set of all subsets of points, which we call positions:

Next we define a function that returns all pairs of points that are connected in a given subset of points: In this * stands for the transitive closure of a relation.

Using this we can define a function that returns a set of points that are connected with a point in a given subset of all points:

A group is subset of points in which all points are connected with each other. The following defines the set of all groups:

In this section we define the collection of all winning groups.

We start with the simplest winning figure, the bridge, which connects two corner points. The set of all positions that contain a bridge is defined by:

Next we look at the forks, which a groups of connected points that touch on three different sides. The definition of the set of all positions that contain a fork:

Finanlly, we look at the cycles. The definition of the set of all positions that contain a cycle: It is not obvious that this definition is sufficient and complete. If there exists a cycle in a group encircling at least one point, it is possible to create a cycle without sharp angles and still encircling at least one point. A sharp angle consists of three successive points in the chain that are all neighbours of each other. The middle of these points can be removed out of the chain, without disconnecting it. By repeating this process of removing sharp angles in the chain we get a chain that fits the given definition.

Now we can define the collection of all winning positions:

With all of the above, we can give the formalization of Havannah games.

Although the previous section defines the set of all legal Havannah games, we could still continue with formalizing how a game is played between two players.

Given two players from the set of players, we can define the game that they would have played together. This is defined by the following function:

Given a game, we can define the outcome as one of -1, 0, or 1 depending on whether the first player won or lost.