This morning, when I went outside, I noticed the first snow flakes. Soon they became more and I noticed that they stayed on the ground. But when the sun came out, it quickly disappeared. Around noon, there where some big snow flakes falling from the sky, but they did not really stay on the ground. In the evening, between seven and eight there was some substantial snow, but again, it did not stay everywhere on the ground. It quickly disappeared when the snow turned into rain.

This morning, while I was still in bed, Annabel shouted: "It is snowing outside". She even opened the blinds and curtains to show me while I was still laying in bed. The snowing stopped around 10 o'clock when there was about 2 cm of snow.

This evening, when I was visiting bookshop De Slegte I noticed one of the shop-assistants moving around books. When I asked him about this, he told me headquarters had ordered them to reorganize the shop and close the third floor. On the first floor there are only new books that are no longer being sold by normal prices. On the second floor there are only second hand books. On the third floor there are some second hand books and some new books. In some way I can understand the idea to close that floor, but on the otherhand it means that the total number of books in the shop will be reduced, which, I think, is bad. But if they are going to have some sale of the books that they have to put away, then maybe it is good. I wonder what they are going to do with the third floor. It would not surprise me if they are simply going to close it for the public and use it as a storage area. We will see.

This afternoon at 14:04:23, I bought three books from De Slegte for five Euro. I only wanted to buy one book. The books are:

I was thinking about buying the book Perfect Rigor: A Genius and the Mathematical Breakthrough of the Century by Masha Gessen about Grigori Perelman but started to doubt when I read the review Nasty and petty book, but great information on Amazon.com, which states that Gessen wrote the book as if she hates her subject with a passion. Gessen argues that Perelman is crazy, where crazy means that a person has an internally consistent view of the world that is entirely different from the view most people consider normal. The author of the review however argues that Perelman is not crazy at all but that all his seemingly strange decisions can be explained by his very high ethical standards by which he is living. It looks like Gessen did not really understand Perelman.

Yesterday, the Clay Mathematics Institute made the announcement that the first Clay Mathematics Institute Millennium Prize will be awarded to Dr. Grigori Perelman for the resolution of the Poincaré Conjecture. This really great news, especially when you know that Perelman did not meet the official requirement that the proof should be published in a peer-reviewed journal. Perelman did not give a detailed proof, but roughly sketched how the conjecture (or actually the more general Thurston's geometrization conjecture). He did this in the three ArXiv papers: The entropy formula for the Ricci flow and its geometric applications (November 11, 2002), Ricci flow with surgery on three-manifolds (March 10, 2003), and Finite extinction time for the solutions to the Ricci flow on certain three-manifolds (July 17, 2003). Furthermore, in April 2003, he explained his proof in a number of lectures give at the Massachusetts Institute of Technology. Various others went to give detailed proves. At first Huai-Dong Cao and Xi-Ping Zhu claimed that they had proven the conjecture, but later they played this down in a revised version their paper called Hamilton-Perelman's Proof of the Poincaré Conjecture and the Geometrization Conjecture. The fact that Cao and Zhu at first claimed to have proven the conjecture, which was supported by Gang Tian among others, and that other mathematicians did not raise their voice about this, made Perelman decided to withdraw from mathematics and to live a reclusive life.

I am happy that the Clays Mathematics Institute did award him this price of one milion dollar, and I hope that Perelman will accept the price, but I am afraid that he will not do so, just like he rejected the Fields Medal.

It seems that Dr. Grigori Perelman has turned down the Clay Mathematics Institute Millennium Prize with the words: "I have all I want." Knowing that turned down the Fields Medal some years ago, this was to be expected, but still I think it is quite sad that this genius is lost. It is about eight years ago that he published his 'proof'. Not much later he abandoned mathematics because of the controversy around this proof. He could have tackled some more hard mathematical problems in his life time. At least he will not be forgotten in the centuries to come.

Update, Wednesday, March 24: An article on Life.ru states that Perelman still has not made up his mind whether to accept the price or not.

This evening, I noticed that Google Earth has applied a recalibration of the position of the images for some parts of the Netherlands. Around Enschede the images are shifted about 10 meters. This means that all the tracks that I have made in the past year now appear on the wrong place. I do not know what I should think about this. I guess that they did this with a purpose, but on the otherhand it destroys all the tracks I have created in the past year. Of course, I could write a program to correct the coordinates, but that would be a lot of work, also because the recalibration is not uniform over the whole country. In some places of the country there is no recalibration at all. In some other locations it is a few meters in a different direction. How long would it take me to construct an accurate map of all the recalibrations that have been applied. It is also likely that these recalibrations occur at certain strict borders. In the past years I have often come along places where the arial pictures where not stitched correctly and where I was forced to make a 'jump' in the track. It is possible that some of these 'jumps' are now removed.

I changed my mind with respect to buying the book Perfect Rigor about the life of Grigori Perelman, and ordered the book from bol.com. On 22:04:55 I received an email confirming my order. 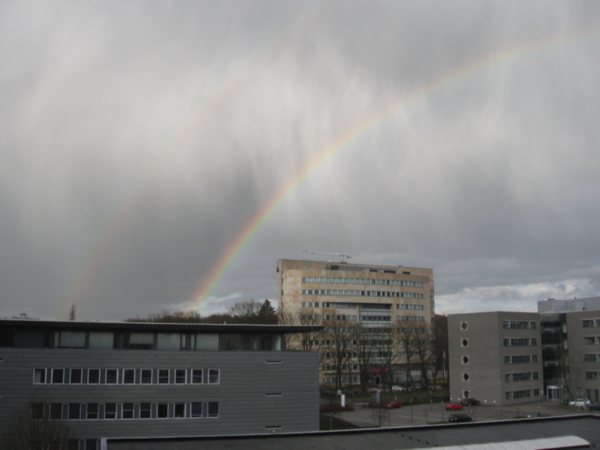 This afternoon, we saw some rain fall from some clouds at the horizon. When the cloud came closer it even developed a roll shape. (See this picture). After is passed over, I realized that there might be a rainbow, and indeed, when we looked out of the window on the otherside there was a full double rainbow (around 18:20). See the picture displayed on the right. About half an hour later, when I went home another wide cloud was moving over, and while I biked along the Kanaalstraat (between 18:54 and 19:02), I saw a single complete rainbow on the left. I did not see anything of a double rainbow. Maybe this was related to the fact that the raindrops where much smaller than with the first rainbow. This months interesting links Movements