Today, Conny and I, went to TETEM art space, were we looked at three exhibitions. First we went to see Size Matters organized together with We Like Art, that shows works by over a hunderd artist in only two sizes, paper size A5 (for € 100 each) and A3 (for € 500 each). We liked the smaller works most. All the works are sold anonymous. Only after the exhibition is over the names will be revealed. But often it is easy to recognize which works are from the same artists. All the works are numbered. We liked the following:

Next we went to experience Beacons, which is an installation created by Mariska de Groot, Matteo Marangoni, and Dieter Vandoren. It consists of devices that communicate with each other through signals that also can be sensed by humans. It was interesting to experience this. Some of the devices sometimes sounded like birds.

Then we watched the short (six minutes) movie Ego Trip by Anton Benois and Beth Dillon. At last we went back to Size Matters to look at the small sized works. We both noticed that we saw works that we had not noticed before. I decided to systematically look at all works and noticed that I had not 'seen' about one tenth of them. Strange how your eyes skip over certrain works.

Yesterday afternoon, I solved my first 12 by 12 binary puzzle (better known as Takuzu. While I was solving, I was already thinking about the number of different solutions there exist and about the number of different columns. I searched on the internet, and I found the sequence A253316 and discovered that the valuess are only known up to and including 8 to 8. I think that because of the requirement that no two columns and no two rows may be the same, it might only be possible to calculate the number by enumerating all the solutions. I estimate that the number for 10 by 10 must be larger than 10,000,000,000. Even if a program could find a thousand solutions per second, it would still take more than a hunderd days to enumerate them all.

This morning, using the underlined numbers, I found the sequences A003440 and A177790 that give the requested numbers. The sequences are basically the same except for a multiplication factor of two. I noticed that the formuleas given with A003440 are more complicated than the formuleas that I came up with yesterday. I also found the related sequence A058527, which gives a very broad upper bound.

I finished reading the book Ongoingness: The End of a Diary by Sarah Manguso, which I started reading last Thursday. In this short book, Manguso tells about her thoughts and motivations to keep a diary. It seems that her main motivation was to hold on to her life by trying to keep her memories of the past, only to discover that it is impossible and maybe even keeping her from truely living life itself. The book could also be read as a short autobiography. The past five years, I have been making quite detailed notes of what I do every day, but not in an attempt to capture my life, but mostly to experience my life by contemplating about what I do every day in an attempt to surpress the feeling that things are going faster and faster. I also keeping another diary, which I only use to write when there are some emotions that I am struggling with, not in an attempt to record them for the future, but to put them aside.

The number of 10 by 10 Takuzu is 48,183,195,384 according to my calculations. Yesterday afternoon, I wrote the first program to calculate the number for various sizes. This program used recursion to fill the grid row by row. The program first creates a tree with all valid sequences for a row (or column), next it tries to select combinations of these trees for all rows and columns. Counters in the trees are used to detect equal rows and columns. A value for a position in the grid is selected if there is a tree available for already filled in values in the crossing row and column. To my surprise, it found millions of solutions per second for the 8 by 8 case, which gave me good hope that the 10 by 10 case would be in reach. In the evening, I wrote non-recursive version. I used Microsoft Visual C++ 2008 Express Studio to debug this and executed a release version. This version found 808,070.433 solutions per second on average and took 16 hours, 33 minutes, and 47 seconds to find all solutions. Finally, I worked on a program that generates a version of the algorithm for a given size with nested for statements and variables instead of arrays. The final version that I tried, fills the grid in a diagonal manner starting in one corner of the grid to the opposite corner. It also tries only zero for the first position, and multiplying the number of solutions found with two. I compiled it with g++ (GCC) 3.4.4 (cygming special) and it found 563,937.167 solutions per second on average and took 11 hours and 52 minutes to complete. Compiling the program with Visual Studio results in Fatal Error C1061, compiler limit : blocks nested too deeply.

Conny and I went to see the movie Star Wars: The Force Awakens at 15:30 today. I already had bought the tickets on October 19 at 13:20:08 for seats A-11 and A-12 (the best seats I believe) and I had been counting the days and hours till the screening. I also avoid seeing any of the trailers, after the very first. I think it is a good, maybe very good movie. I got wet eyes at some scenes, out of nostalgia, I guess. I think that the movie had a good balance of action, drama, and humor. I thought that the acting was great. I could not see where the movie was going, which made it an exciting ride.

Conny and I went to Zwolle. At the railway station in Hengelo we saw a rainbow (a picture). In Zwolle we went to Museum de Fundatie to see the other half of the Turner exhibition, of which we saw the first half on November 25. Below a list of works we saw, all by Turner and some others as well:

Next we visited bookstore Waanders In de Broeren, which is situated in a former church. We looked around and watched an exhibition of Ton Schulten. We also visited bookstore Boekenhuis Zwolle. Finally, we visited the ice sculpture fesitval behind the railway station. (The route we walked in Zwolle can be viewed in Google Earth: KML file or in Google Maps.) On the way back in the train, the sun was low at the horizon, just like it was on the way to Zwolle. I took two pictures: one sharp and one blured.

At 13:18, I bought the book Na de beeldenstorm. Drie opstellen over recente beeldende kunst by Carel Blotkamp from charity shop Het Goed for € 1.50. I did not know of this book. It contains two reproductions of works by Peter Struycken. Illustration 8 is Komputerstrukturen 4a rotated by 180 degrees and Illustration 7 is Wetmatige beweging rood-geel/blauw-wit.

I found some new solutions for two 8 by 10 Chinese Wooden Puzzle. Today, I aborted two progams running for about a month. When I analyzed the results, it looked like both had found all possible solutions, because for all solutions were found in multiples of four. I found new number of solutions for White, orange, yellow, and blue (2978 instead of 2857) and for White, orange, red, and blue (550 instead of 542). Because the program (from November 18, 2015) appears to take much longer than the older program, which contained a bug, I decided to work on a reimplementation of the older program. Just yesterday evening, I succeeded in making that program to return the same results for all possible puzzles with size 1 by 10 to 6 by 10. The last bug that I removed from that program, might also have been the bug that made the older program return fewer solutions. I plan to verify this and then try to determine the fastest algorithm.

The last days, I completed recalculating the 8 by 10 Chinese Wooden Puzzles. It turned out that the last algorithm was by far the fastest, so I let it run on the open problems and verified the results, when possible with the results from the correct but slow algorithm. This allowed me to correct or verify the solutions for: 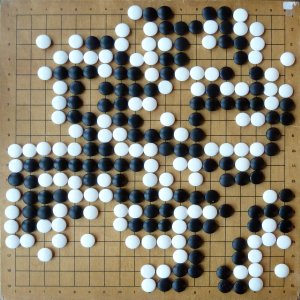 Today, I went to Wintergo, a rather relaxed Go tournament for a single day. I was just in time to enlist for the round of the day. I played a very interesting and exciting game, which I won, but could easily have lost if I would have made a mistake. The end position is displayed on the right. game record. I also brought my wooden Chinese Wooden Puzzle and showed it to some people. Elske and Sander found three and one new solutions. In the afternoon, I went to look at the ruins of the St. Walrick chapel with Clootie tree and walked around the fens of Haterse and Overasselt. I took some pictures, one of a dead tree in the water. (The route in Google Earth: KML file or in Google Maps.) On the way home, I listened to Armin Van Buuren - Mix Marathon XXL (on SoundCloud).

This evening, I finished reading the book Kind of Minds: Towards an Understanding of Consciousness by Daniel C. Dennett, which I started reading on October 20, four days after I bought it on October 16. It is a rather philisophical book with asks some good questions, but I find the part about the difference between human and animal minds (of apes and other mammals) not very convincing, especially because it gives language abilities a central role, stating that language is the the vehicle for conceptual thinking. Being a visual spacial thinker, I often struggle for finding the right words and expressions to express my thought, from which I conclude that concepts are more fundamental than words and expressions. I know that I can perform a lot of thinking without using words, and it seems that the conscious experience, awareness, is not bound to the use of language. The book states many good question, but does only answers a few, as the book also concludes at the end. This months interesting links
Home | November 2015 | January 2016