Yesterday, there were ten cases of the COVID-19 infections in the Netherlands. For three of these cases, it is not known how they got infected. One of these was a 49 year old woman who had stayed in the hospital for a week. The hospital now has been 'closed' for new patients. So far, no other people who had been in contact with the patient have been tested positive. I heard that the doctors treating the patient several times considered to test the patient, but they received a negative advice from the Erasmus MC, but it was against the 'protocol' only to test people who have been in a risk area or have been in contact with people who have been a risk area. Since last Friday, the protocal has been changed.

I went to opening of the exhibition AH-Erlebnis at B93, with works by Willemijn Calis, Elmar Ipskamp and Julianne Menke. I especially liked the video work by Willemijn with a sleeping couple breathing at the same pace. I also talked with Claudio Beorchia, because I was interested in his book Saintscapes. Views Of Lombardy, which I saw last January. We had a nice talk and he gave me a copy (60/100) of his book De wachters van de Polder. At 23:02:01, after I came home, I ordered his book Saintscapes from Idea Books for € 36.75.

At 15:02, I received the book Saintscapes. Vedute di Lombardia-Views of Lombardy written by Claudio Beorchia, edited by Matteo Balduzzi, written in Italian and English, and published by Viaindustriae in 2019, ISBN:9788897753575, which I had bought on Wednesday, March 4 from Idea Books for € 36.75.

The RIVM today announced that there are 188 confirmed cases of COVID-19 in The Netherlands. From the start of this month we went from 10, 18, 23, 38, 82, 128 to 188 cases. With 8, 5, 15, 44, 46, and 60 new case in the past days, that looks like an exponential curve, meaning that if you would only look at these numbers, you could only conclude that we are still in the break-out phase and the spreading is not under control. It is being said that the increase in the past days is due to more extensive testing. The public health institutes are still trying to track the origin of each case. Of the 188 cases, 112 have been abroad, most of them in Northern Italy. 47 cases got infected by one of the other confirmed cases, leaving 29 cases where it is unknown how they got infected. One of these cases is a 86 year old man, who died yesterday with having an infection. It is not clear if the infection was the main cause of his death, because he was initially admitted in a hospital for another condition.

I brought a short visit to the exhbition with works by Judith Schepers at Robson.

While driving home on the A1 motorway, we saw five rainbows, namely:

I went to the opening of the exhibition Signals and Words at XPO with works by Thiago Hersan and Claudio Beorchia. Thiago Hersen is covering the signal part with some devices processing WiFi packets based on the idea of astrolabe. Claudio Beorchia covered the words part with five works on display. I found them all interesting. The most interesting of the very different project, I found his project Guilty, where he rewrites the Italian penal code into first person perspective, and his book project Anthems, Updates, where he processed the national anthems of 27 European countries through Google Translate. At 17:59, I received copy 68/100 of the book Anthems, Updates from Claudio.

Yesterday, the Dutch government announced 'lock-down' measurements with respect to the spread of the COVID-19 virus in the Netherlands. This sounds like we are past the containment phase. So far, there are only two countries in the world where a serious outbreak of the virus has been successfully halted, and these are the Peoples republic of China and South-Korea. The first did it through extreme lock-down measurements, the second did it through very extensive and wide testing. South-Korea was prepared, because they learned their lessons from the MERS outbreak in 2015. I am afraid that most national public health institutions did not learn from their experiences. In the past months, South-Korea tested 220,000 people on the COVID-19 virus. They are still testing about more than 10,000 people every day. Although others have suggested other reasons why the out-break is now under control, and not in Italy, where it started in a very similar way, I think that their agressive and wide testing of people have contributed a lot. Here in the Netherlands, especially at the start of the out-break, testing has been rather limited. And even now, people are not tested in large counts. Figures about how many people have been tested and are tested every day are not published. The RIVM has stopped reporting about the number of 'imported' and under investigation cases. At 14:00 they reported that 190 people were tested positive, leading to a total of 804 official cases. Of these, 179 are professional care givers. They also reported that five more people, all old and in poor health, died, bringing the total to ten. They did reported that 115 people are being treated in hospitals at the moment.

Two links with respect to COVID-19:

This evening, our prime minister Mark Rutte talked about herd immunity during his televison speech about the COVID-19 virus. Which percentage of a population needs to be infected for herd immunity depends on the measure of contagiousness. For SARS this percentage is between 50% and 80%. He suggested that in this way we can protect the old and weak. I wonder how this is going to work. It would mean that the old and weak have to go into isolation until the epidemic is over. And from which age should people go into isolation? And what about the fact that amongh those you need IC treatment at the moment here in the Netherlands about half are under the age of fifty. This might be explained that a lot of young people got infected during carnaval parties in the South of the country, parties which were mainly visited by young people. It also seems that the infection rate among people in their twenties are high, usually with mild symptoms. 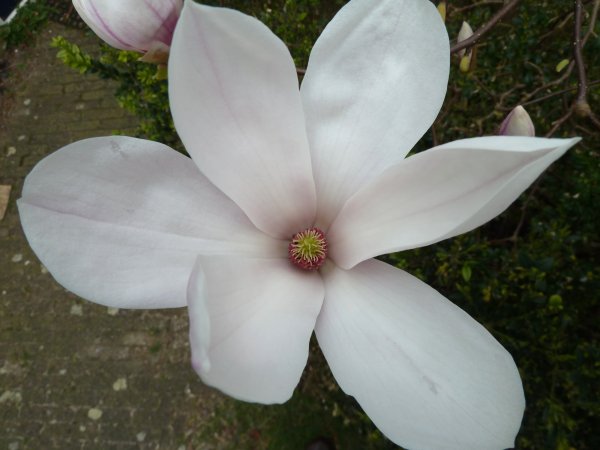 The first flowers of our magnolia have opened today. Yesterday, they almost opened. I took some pictures. This is rather early.

I wanted to give HSLuv a try with respect to generate a limited colour palette as inspired by the colour palettes by Peter Struycken like I did more than two years ago. I used hsluv-0.1.0.min.js for this purpose, resulting in the palette displayed below. I have to admit that it looks more balanced than the one I created before.

Today, Alexander W. Friedrich, the medical microbiologist and head of the department of medical microbiology and infection prevention at the UMCG in Groningen, made some bold statement with respect to testing for the COVID-19 virus. He stated that he was annoyed about the position of the RIVM, that you are only contagious from the moment you have symptoms and that you have to stay at home - and that because of this only contacts who have had contact with the person tested positive after he or she fell ill are identified. "That is simply not true, just as it is not true that children cannot transmit the virus. That is why from the start we in the northern provinces have said: we are counting back two days from that first day of illness and we also trace those contacts. Second, children are contagious even if they don't get sick themselves." (Translation by me with help of Google translate.) He feels that the situation in the four northern provinces: Friesland, Groningen, Drenthe, and Overijssel, is different from the rest of the country and that it search and contain is still a valid strategy and there is good reason to deviate from the national policy. He also feels that care workers should be tested more, because they could infect a lot of people. He also claims that there is no problem with the testing capacity. He claims that it caused by the decision made before the first cases appeared in the Netherlands, that only two labs, at the RIVM and the Erasmus MC, should be freed for testing. I remember that in the first weeks, all positive test had to be repeated by a test by the RIVM to let it count as an established infection. The government has responded with stating that they are not happy with this deviation and that everywhere the same policy with respect who is being tested should be followed, again stating that the testing capacity is limited. Meanwhile news about cheap and fast tests becoming available internationally are being reported. 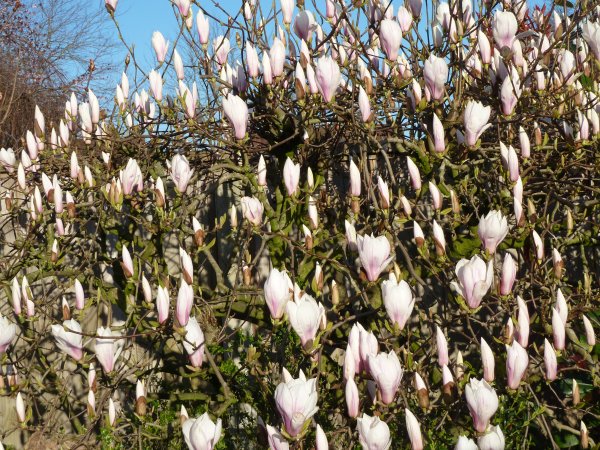 Although spring has just started, it has been rather cold compared to the previous months. We have been seeing clear blue skies for some days, with no contrails visible in the sky. Many of the flowes on our magnolia have opened, but only a little bit, as can be seen in the picture on the right. It will even get a little colder, especially during the nights, and I am afraid that the flowers will turn brown as they have done in other years.

It looks like that the COVID-19 crisis is getting out of control in the Netherlands. It was already known that the number of officially reported cases was much lower than the real number of cases, because of the limited number of tests that are performed. Today, there was also some discussion about the limited availability of reagents for RNA extraction produced by Roche Diagnostics company, because about 80% of the testing machines in the Netherlands are bought from that company. (Some positive news was that a national lab for testing disease out-breaks in animals, have said that they are able to perform between 500 and 1500 tests per day.) Now it also appears that the number of fatal cases are under reported, because persons who have not tested positive are not included. Some GPs have reported that there are patients with clear signs of the COVID-19 virus who have died at home, who are not included in the official figures. Sometimes conditions of patient can deteriorate so quickly that they die before entering a hospital. I can also imagine, that some people simply refuse to be admitted in a hospital or are not allowed to enter a hospital because they are already receiving palliative care, such as people with severe dementia. Furthermore, it is becoming clear that the number of patients requiring IC is going to be higher than the available locations and that regular patients are no longer getting the optimal care due to delayed treatments. I am afraid that triage will also start to happen in the Netherlands, just like it has happened in Italy. I live an area where the number of cases is still relatively low, yet patients from more severly affected areas are transfered to local hospitals to lighten the burden of the hospitals in the most affected areas. Futhermore, also morgues are reporting that they are already under pressure and fearing that the situation might become much worse. They too, like many others, are reporting a shortage of protective materials. To me it sounds like the out-break is out of control. The first estimates are that this is going to hit our economy hard. Some people are already raising the question whether the economic consequences of all the measurements is in balance with the number of casualties we are trying to prevent. 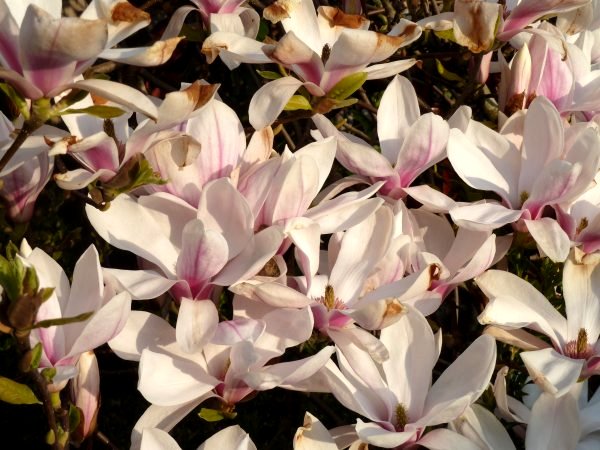 I would say that our magnolia is in full blossom, despite the cold nights of the past days, whioh has made some of the edge of the flower petals turn brown. I took two pictures, one of which is shown to the right.

COVID-19 statistics for the Netherlands