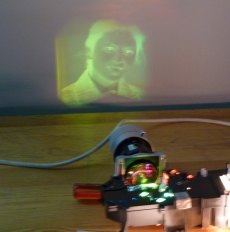 Bring Your Own Beamer

This evening, I attended the last Bring Your Own Beamer event at Tetem art space. The event was similar to last years. I occupied the same spot with an updated version of the project based on Street Tiling Patterns and a projection of a negative of an old picture of Li-Xia by the parts of the beamer that I put together last Tuesday and finished Wednesday evening. A picture of this is shown on the top right. For the Street Tiling Patterns project, I increased the speed of the animation and I removed a bug in the algorithm to find a matching pattern. There were some people from last year. One of them was Willemijn Calis. I also met Tessa Langeveld, who was showing moving forms in still spaces. A lot of people from TkkrLab came to visit and two of them had brought their own projects.

Before the visitors came at eight, I started working on the idea to pick the colours for the Street Tiling Patterns project from a limited palette as inspired by the colour palettes by Peter Struycken. At home, I continued working on this, resulting in the following palette: 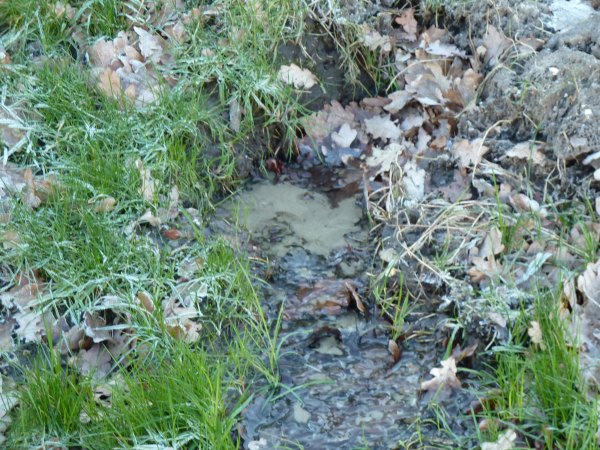 For some week, there has been some water flowing across the bicycle path along the road called Hendrik Ter Kuilestraat at a location that I talked about before. This morning, I noticed that the water was coming from one spot and I stopped to take the picture shown on the right. You can just see the water flowing. A little further on the road, there are also some wet spots, which have turned into ice due to the low temperatures of the past days.

At 12:00, I bought the book following books from charity shop Het Goed:

At the end of the afternoon, I visited bookshop Broekhuis, which was established exactly 150 years ago. Five years ago, I bought a book when they celebrated their 145 years existence. The bookshop is still at the same location and has undergo some improvements in the past five years. I did not buy anything.

Yesterday, I read about Jigsaw Puzzles and The MacMahon Squares on I Programmer, and decided to give it a try. My first idea was to convert the problem to an Exact Cover problem. However, it did not find any solutions. This made me think about a program that could find the best almost solution. When I finished the program, it found 46 solutions. After some debugging, I found a bug in the algorithm to generate an Exact Cover and my Exact Cover solver found the 46 solutions with a second. I combined both algorithm is one program. The 46 solutions are given below:

At 10:14:23, I bought the CD Interstellar: Original Motion Picture Soundtrack from bookshop Broekhuis for € 9.99.

Today is the first day of the year of the dog according to the Chinese calendar. The spring festival has begun.

In the afternoon, I visited TETEM art space. I saw the new exhibition Counting Digital Sheep. Quite interesting. Especially code / coat (about using the secure tails operating system) by Jochem van Schip, Artificial Dumpness, and Linger by Japser van Loenen. (Through the latter, I also found eps8266-sniffer when at home.) I also watched In the Robot Skies short film by Liam Young.

In the afternoon, I went to the opening of the exhibition Black Mirror with photographs by Jenny Boot at photo gallery Objektief in Enschede.

At 11:42, I bought the following seven books published by Witteveen+Bos from charity shop Het Goed for € 1.50 each: 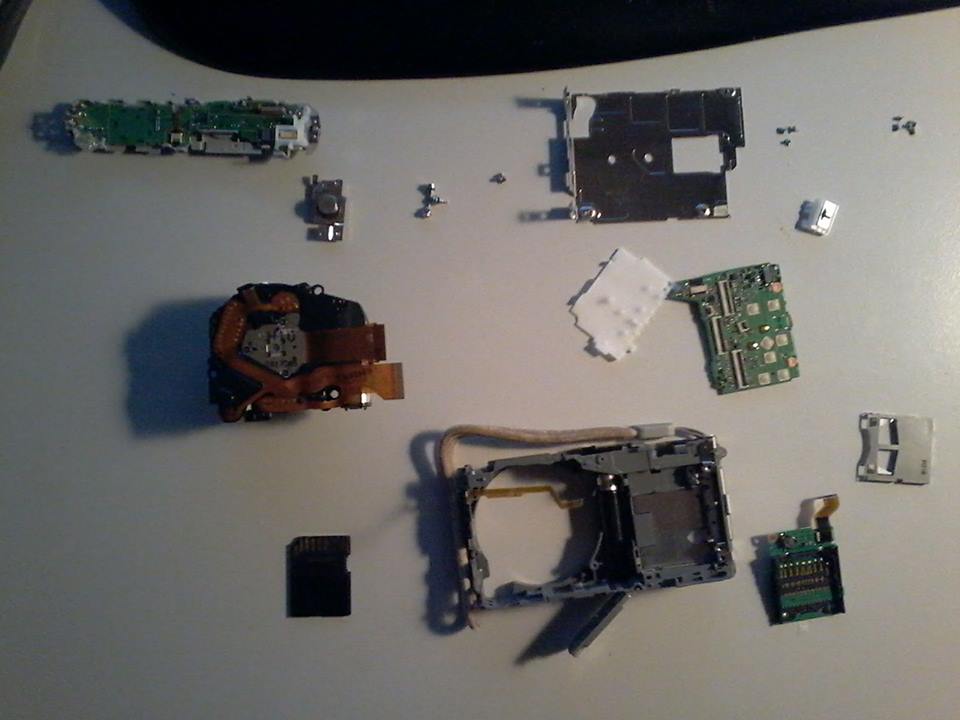 This afternoon, when I wanted to take a picture with my Panasonic Lumix DMC-TZ8, I got a message that the SD card was locked. When I took it out, I discovered that lock mechanism was broken. I tried to fix it with some scotch tape, but it did not work and the SD card got stuck in the camera. I was slightly annoyed by this. This evening, I decided to open up the camera. I followed some instruction videos on YouTube and managed to open it up to the SD card reader (after I had removed the SD card with force). I also opened up the SD module itself, because I wanted to see if I could disable the mechanism that detects whether the card is locked or not. (I think it is really silly that there is a switch, because I want to use the SD card to take pictures, and not use to small screen of the camera to watch pictures on some SD card that is locked.) At some point, some part of the eject mechanism jump out of place and the string attached to it disappeared. The picture on the top right shows the camera in its disassembled state. The front and back pannels are outside of the picture. I spend almost an hour looking for it, but wonder, o wonder, I found it on the floor when I had already given up. (Actually, I already had seen it, but not concluded that it could not be it.) The spring is only about 1 cm long. I spend another hour trying to put everything together including a tiny piece of wood from a tooth picker to push down the lock detecting switch. After I had put everything together, I managed with some fiddling to get the camera working with the broken SD card. I only had one little screw left. I have some idea where it should have gone, but I decided not to bother taking the camera apart again.

In the evening, I attended the opening of the exhibition Focus on colour organized by FOTON. On a long wall there were many small pictures with dominant colours going from purple to blue to green to yellow to orange to red. And in the small room there were large black/white pictures. I found two them rather interesting. One of a thunderstorm and one of crossed legs, but taken in such a way that you do not immediately recognize which is which. Someone mentioned Edward Weston in this respect. This months interesting links
Home | January 2018 | March 2018