The past three months, where the most sunniest on record. On average over the whole country we had 790 hours of sunshine while on average there are 517 hours. The previous record from 2011 was 743 hours. It was also very dry. We only had (on average over the whole country) 77mm where 172mm is normal. The weather station at Twenthe Airport measured 752.2 hours of sunshine and 95.5mm of rainfall.

At 17:17, I bought the following books from charity shop Het Goed: 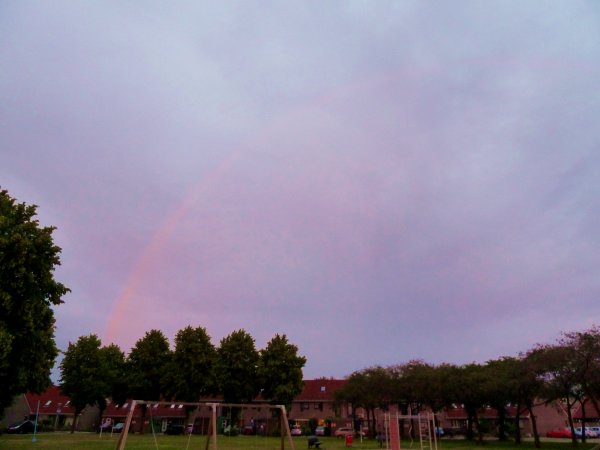 When at 21:56 I left home the sky was red due to the sunset. It was also raining a little and I saw a faint single but complete rainbow. I also noticed that it was quite red. Just before ten, I took a picture, which is show here, after I increased the saturation a little to increase the visibility of the the rainbow.

I wrote a program to map Suguru/Tectonic puzzles on an Exact Cover. The exact cover solver should be able to read the input of a number of columns separated with commas, where the numbers may be in any order. The program reads the input from the standard input. An example of the input format is:

Annabel gave me a pyramid maze, which she has made from wood with a laser cutter and for which I wrote the program. Below a photograph of the maze. 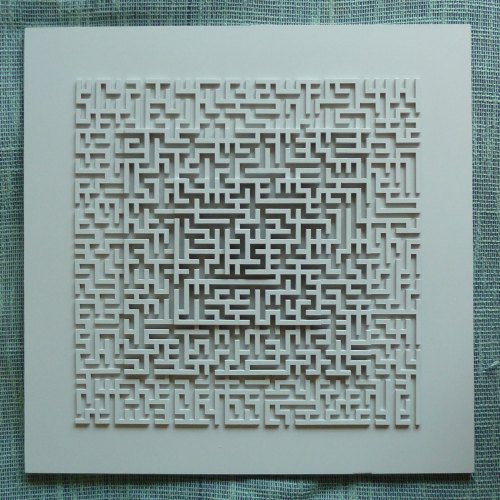 I wanted to find a route to visit all the Mupi's of AKI Finals Mupi route. I spend some hours drawing connection routes (with Google Earth) between the mupi locations and noting down the distances. (The results in KML file or Google Maps.) I made a drawing of this:

Finding a shortest route is the Traveling Salesman Problem as a graph. I searched for a solver. I came across TSLIB95. I installed TSPLIB 95, but when I enter the import tsplib95 in Python 2.7.17, I get a SyntaxError on line 5 of bisep.py. The pages do not mention which version of Python should be used. I downloaded tsp_brute from Brute Force Solution of Traveling Salesman Problem and got it compiling with g++ with some modifications. Next I wrote a program to generate the matrix from the graph. The tsp_brute took a long time crunching and I killed it after some time without it producing a solution or showing any sign of process. I tried to find some route myself, and found a route of length 26.181 meter. Next, I wrote added an algoritm that incrementally removes the longest connection lest any node get less than two connection. From the resulting list of fragments, some cicular, some with branches, I constructed another route with a length of 25.641 meter.

Today, I biked the route (in Google Maps) I found yesterday, although I followed the route by heart (except for some small change), I missed one of the Mupi's along the route. It was the Mupi with a reproduction of the works by Julia Hofman. I left at 9:29 and returned at 12;03. Below the list of Mupi's I encountered with a short description of the work as I precieved it. This months interesting links
Home | May 2020 | July 2020