In the past week, I tried to find out if there was an even shorter route to complete the AKI MUPI route. I first tried the TSP Solver and Generator. Took me some time to generate a binary .tspt file in the right format. The solver very quickly found a solution of more than 28Km, not even close to the shortest route I had already found. Next, I wrote a recursive back-tracking solver. It worked, but did not make much progress, until I made some modifications that strongly reduced the number of alternatives searched on every level. It did find a shorter route, starting from home and visiting: C, E, I, Q, J, F, G, H, L, K, M, N, O, P, g, a, Z, Y, W, X, l, k, j, i, h, f, e, d, c, b, V, U, T, S, R, B, A, D, and back home where the letters refer to the points on the map, I presented on June 27. Next, I implemented a batch solver, which starts with a batch of 'smallest' possible solutions and extends these in steps. With a batch size set to 5000, this algorithm did not find any shorter algorithms. I added some of the output to the source of the program.

Six foreign students of the University of Twente, who wanted to travel abroad and were required to be tested, tested positive to COVID-19 to their surprise because they did not have any of the symptoms. They are all living in the Hogekamp building that has about 450 rooms for student of which about 80% are foreign students. Some foreign students from China were surprised that not everyone in the building was required to be tested. Although there is sufficient testing capacity, only people with symptoms are advised to be tested. The official statement is still that it has no use to be tested if you do not have any of the symptoms. The public health organizations are doing contact follow-up on everyone who tested positive, but it seems that those people are only advised to have themselves being tested if they have or develop symptoms. I am a little worried that if six random people test positive without showing any symptoms (and not knowing anyone who tested positive) what that means to the number of (young) people who are now infected without having any symptoms. It is possible that now a larger percentage of people are infected without showing any signs of the infection due to seasonal effects (such as higher vitamin D levels). I presume that testing is not expensive compared to the possible economical costs in case another lock-down is required when in the fall the number of people who develop serious symptoms is on the rise again. Yet our government still seems not to attempting to reduce the number of infections as much as possible, but to keep it below a manageable level.

I have been trying to reproduce the workings of the HEK program, which Peter Struycken used in 1976 for designing a fence around the tax office in Zwolle. I started looking into this, when I was informed about an attempt by someone else. The catalogue Beelden en Projecten gives a description of the algorithm along with some drawings and graphs. The algorithm given some input parameters and a random series, generates a series of angles and lengths. These angles and lengths are used to generate a line drawing based on line segments. I wanted to determine the multiplication factor that was used for the series of lengths and I thought I could do this by reverse engineering the random series from the series of angles (which could be derived from a design drawing). This did not work as easy as expected. I came to the conclusion that the series of angles are not used as absolute angles but as relative to the previous line segment. A conclusion that seems to match with the description of the text. But then it still did not work using the parameters in the text. To avoid errors in the angles and lengths I had manually measured, I took a picture of one of the design drawings and tried to measure the coordinates of the line segments more accurately. Because that did not resolve all the issues, I decided to first verify the algorithm with the graph showing the various input and output parameters of the algorithm. Tonight, I concluded that the graph has an error with respect to the line representing the random values. One of the points is at 0.72 but it seems that according to the algorithm it should have been close to 0.07, which looks like a simple displacement of period error, presuming that the graph was hand drawn. 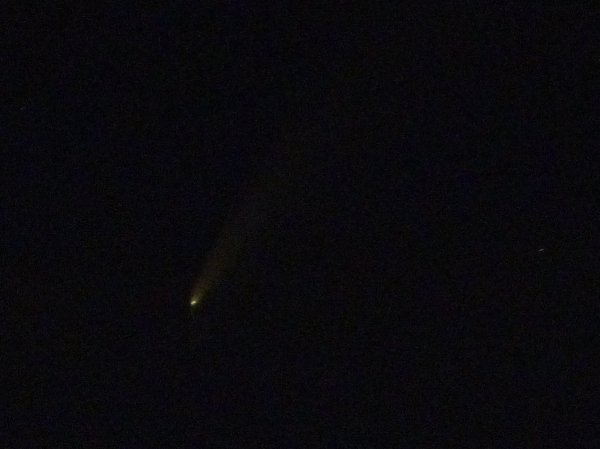 Just after midnight, Conny and I left on our bikes to the road called Helweg to see if we could see comet Neowise. When on the Helweg we saw the comet. We stopped at a crossing of the road and used a tripod to take some pictures from the comet and also from the rest of the sky. I took a picture of Jupiter with four dots around it, the moons Europe, Io, Ganymede and Callisto. I used the excellent website StellariumWeb for locating the comet and finding the information about the moons around Jupiter.

At 17:30, I bought the book aki eindexamen fotografie 1999 written by Rutger ten Broeke. edited by Marcel Vos and Tjipke Meijer, written in Dutch, and published by AKI in 1999 from charity shop Het Goed for € 1.50.

There are some flowers in our magnolia but only a few have fully opened. The little chestnut tree, that looked like it had died, has started to grow some leaves. I try to water it regularly.

Today, it was reported that the number of COVID-19 infections in the Netherlands almost doubled from 543 to 987. On a radio show, Ab Osterhaus pleaded for more testing and contact research. He says that we, the Dutch government, do not have a consistent policy to eliminate the virus. He feels the discussion is too much about the hospital capacity and that we accept that the virus remains in the country. He argues that it is very difficult to change the behaviour of people and that the government should focus on testing and contact research to avoid the situation where another lock-down has to be enforced, which will have serious repercussions on the economy.

I received CampZone 2020 "Ærpane" badge. Assembling was rather easy with the instructions. (I think, it would be better to first plug in the small loudspreakers and then put them in such that the wires are straight. I felt it was easier to first plug in the flat cable before connecting the two printed circuit boards.) It took me a long time to access the badge through the website. I installed the Brave web browser and added a rule for the USB drive. It only worked after a reboot.

Conny and I, followed a walking route (description in Dutch) along historic places in Enschede following the six wigbold markers, that marked the area outside of the city of Enschede to which the city laws applied. Originally, these were marked with field boulders. It is not known on which dates these boulders were placed, most likely after Enschede received city rights around 1300, which were confirmed in 1325 by Bishop Jan III van Diest and henceforth allowed Enschede to protect itself with a wall. In 1818, it was decided that the six stones would mark the border between the city of Enschede and the county of Lonneker that surrounded it. In 1826 the boulders were replaced with Bentheimer stone posts. In 1934, Enschede and Lonneker were joined and the border poles lost their function. The six stones that are now placed near the original locations (but one is on the original location) are replicas.

In the route also two old graveyards were included. Both graveyards were outside of the city borders when opened, but are now well inside the city borders. Both have been closed for almost a century, Both contain graves of from important families of the textile industry that dominated Enschede. Both graveyards fell into disrepair and some effort has been put into restoring them. At the entrance of the the 'boeren' (Dutch for farmers) graveyard, there is a sign signaling that alcohol and drug use is forbidden and that group formation prohibited, but is seems that both are still taking place. In that graveyard we also found a rather modern looking memorial stone for Tommy Tattersall, who at the age of 17 died in 1887 after being kicked in his stomach during a soccer game. Thomas "Tommy" Tattersall and his brother Stephen came to the Netherlands with their parents in 1876. The family was included in the Enschede upperclass, where they explained British soccer to their Dutch peers. His father owned a factory supplying machines to the textile industry. Saturday, three weeks ago, the memorial stone was revealed again after it was being clean-up and recovered from some location outside of the graveyard. The memorial has the form of a broken tree. We found some other examples of this symbol on the other graveyard. We also found several graves with an ouroboros and two crossed, upside-down torches on it.

Conny and I went to the Drenthe province. We first went to Drents Museum in Assen, the capital of Drenthe. There we saw several exhibitions. First the exhibition Barbizon of the North: The Discovery of the Drenthe Landscape 1850-1950. I found the following works notable:

From the exhibition Saskia Boelsums. I found the following works notable:

From the exhibition David Schnell - Saison, I found the followin works notable:

While walking through the rest of the museum, I also saw two works bij Jan Sluijters: Baadsters in zee, 1995, and Damesportret. We also the exhibition Wout Muller. At 13:39, I bought a round Goki puzzle and four cards with works on display at the museum shop.

In the afternoon, we visted the superterp of LOFAR. We only saw it from a distance. I parked the car at the end of the road Achterste Velddijk in Exloo and walked along this road where we encountered the CS032 base station. We turned right on Beeksdijk. Along this road there are two square pillars with some information about LOFAR. We walked along base station CS001 and took the small path through the fields. When coming close to base station CS011, we saw large flocks of goose take-off, probably scared by our presence. We also found some mint plant, probably mentha aquatica. We crossed a bridge and walked till the next turn in the path, which is the closest you can get to the superterp. But there was not much to see due to lots of reed plants on this side of the superterp. Had we continued, we could have walked 'through' base station CS017, but we returned the same route we had come there. We collected some of the mint on the way back. Conny took many pictures. When seeing these pictures, I was a little suprised by the many contrasts between the pictures she took. This months interesting links
Home | June 2020 | August 2020 | Random memories