At 13:23, I took a picture of the self watering plant, which is shown below. This morning, I noticed that the glass has some lines caused by calcium diposit, which clearly indicates that the pump is working and giving the plant water. I put the ESP8266 module, the moisture sensor board and the TOP31C transistor (with connecting wires) inside a round tray we got with a taskaway dish and put the plant pot on top of it. On the right side of the pot you can see the wires running to the moisture sensor. 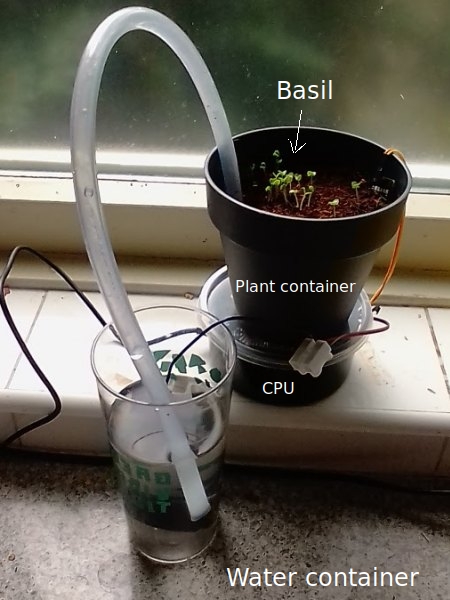 This afternoon, I ran Primes | A Software Drag Race on FJF3. It is a test in comparing the performance of various algorithms to calculate primes in various programming languages. Below a summary of my results are given, where I have only included the fastest solution for any programming language, except for C, because the fastest C program in the list, has a large table included that seems to be generated with the help of another program, which I consider a way of cheating. I have been thinking about analyzing the various program and see how they could be generated from one and the same source.

Conny and I drove to The Hague, where we went to the Graduation show exhibition at Royal Academy of Art. (Due to the COVID-19 restrictions, we did not see the whole exhibition.) I found the following graduates noteworth (in the order that I encountered them or their works): There was no catalogue available. Afterwards, we walked through the city and paid visits to the bookshops: Paagman and American Book Center before checking in at our hotel. In the evening, we had a very nice dinner at The Raffles, which servers authentic dishes from West Java. We had the Menu Bandung and enjoyed it very much. We talked about what brought us to The Hague with one of the servants and he told use that his mother, Judith Werdmüller von Elgg, was an artist as well.

Around half past nine in the evening, Conny and I left to the beach in the hope to see the sunset. We arrived there one minute before ten and saw that there were clouds on the horizon (aboge the sea). When we walked over the dune, we say a half red sun on the horizon (below the clouds). Conny managed to take some pictures. (A crop of one of these is shown below.) After that we walked along the waterline on the beach towards the North. Twice, I walked into the water, the second time till all little over my knees. I made it to the next sandbank and watched the waves break. The sea was rather calm and the waves not very high. 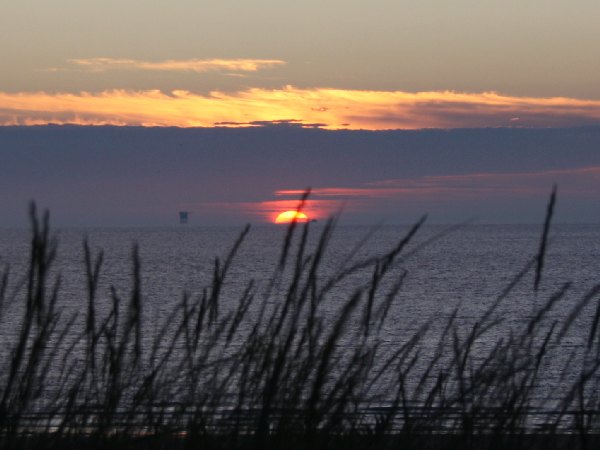 In the afternoon, Conny and I visited the exhibition Fake Me Hard at AVL Mundo.

In the last weeks, we saw an explosive increase of COVID-19 infections, especially due to the delta variant, here in the Netherlands. It is primarily among young people with ages between 10 and 30. It is probably caused by young people having been on holiday and super spreader events. Here in Enschede, about 200 people were infected during one party with about 600 people who had to show a test proving that they tested negative. To me it seems that this can only be explained by aerosol transmission. This evening, I heard Marc Bonten, member of the Dutch Outbreak Management Team and working at National Institute for Public Health and the Environment, say that he does not know if aerosol transmission played any role. So far the number of hospital admissions has not increased. Last Friday, our government took many measurements to redude the spread after having lifted almost all restrictions two weeks ago. Some have said that the governments favours holidays abroad above festivals at home.

The last two days we saw a red sun set through the trees during our evening walking. This evening, we decide to leave half an hour later. The sky was clear and we walked to a spot (at the end of road called Helweg near the N35 highway) were we could observe the sunset. The sun was rather bright when it set and not red as we had hoped. Just right when the sun was setting, we noticed that the moon was rising on the opposite side. I took some picture. Below a crop of one of these. 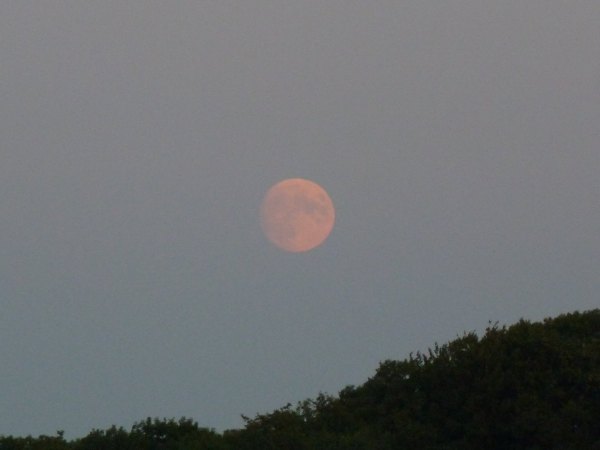 There are some flowers in our magnolia but only a few have fully opened.

A double linked list is a data structure where each element in the list has a pointer to the next and to the previous element. A clever way to implement it (as the Standard Template Library does) to represent an empty list by a single (hidden) element and to make the next and previous elements circular, meaning that the previous pointer of the first element and the next pointer of the last element point to the hidden element. If doing so, the procedure to add an element to the list is the same no matter where it is inserted. It is also possible to remove an elment from a list, without having to know the actual list the element belongs to. I noticed that the LinkedList<T> Class does not support such an operation. However, it is possible from an element (represented by LinkedListNode<T> class) to find the list it belongs to and from there call the Remove method. I looked at the source code and it affirms my suspicion about how it is implemented. This months interesting links
Home | June 2021 | August 2020