In the afternoon, I went to see the exhibition Afstemming / Balance with works by Peter Struycken in andriesse eyck gallery, which has eight of his new works and four earlier works (two from 2016 and two from 2014). The last series of works all have twelve colour either in a twelve by twelve grid or on a twenty by twenty grid. The colours are selected such that they are in balance with eachother with respect to brightness and saturation. The lights in the gallery where off because the works need to be viewed in daylight. Any other light source may destroy the balance. It is not even possible to take pictures (with a digital camera) of these works due to the limitations of the three colour channels of the camera. Some colour just get out of balance destroying the effect of the original works. I met with Peter Struycken and talked about him about the works, most of which took more than two months to be made, and other matters.

Afterwards, I also visited galery Ron Mandos where I saw the exhibition Lesssons of the Hour by Isaac Julien. I also visited the bookstores Boekie Woekie and Scheltema.

I wrote a script (for the MySample editor) to correct the colours in some pictures of the Afstemming (Balance) works of Peter Struycken. For each of these works he selected twelve colours with equal distance hues and the same brightness and saturation. He spend a long time to balance these at daylight conditions. When you take a picture of these works with a digital camera the balance is lost because the blueish colour become appear more bright and the redish/brown colour become darker. A side effect of the balance becoming lost is that the pattern of the twelve by twelve or twenty by twenty squares gets unintentionally the focus. The photographs of the works and the Afstemming / Balance exhibition were taken by Peter Tijhuis. The script converts the RGB to HSV, adapts the brightness depending on the hue, and converts it back to RGB. The result of the correction is not perfect and probably also depends on the colour settings of the monitor, but is hopefully a little better than the original photographs.

I brought some books and objects home from the former home of my mother now that she lives in a nursing home. Among them:

This evening, I got my first 'real' compiler working. Actually, it is only the first step of a compiler. The program cc1.c can be used to compile one specific program, hex0_2.c, which can hardly be called a C program, into some intermediate file, which with some kind of macro assembler and a program to convert hexadecimal numbers to binary, resulting in a program, called hex0_2 that does that: converting hexadecimal numbers to binary. In the past weeks, I spend quite some hours debugging various versions of the hex0_2 program with the edb debugger to fix bugs in the cc1.c program.

I went to TkkrLab for the Cyber Saturday presentation by Rinus Roelofs about mathematical art. (It is about half a year ago that ago that I visited a space.) His presentation is about folding flat shapes into 3D objects. The oldest description is by Albrecht Dürer. Roelofs showed a number of animations based on these descriptions. He also talked about Infinite Regular Polyhedra. He experimented with all kind of constructions of basic shapes where all the shapes are connected with straight angles, which if made from wood with a laser cutter can be put nicely together.

The presentation, in Dutch, but with a lot of interesting animations, was recorded and can be found on YouTube: CyberSaturday: Mathematische kunst door Rinus Roelofs.

This morning, my mother passed away at the age of 91. She already received end-of-life care for some days and at her age and condition it was not very likely that she would recover from her illness. My oldest sister stayed with her during the night taking care that she was comfortable. I am happy that Annabel and I visited her last Tuesday for about half an hour. She was only briefly awake and excused herself before falling asleep again. I visited her on October 2 and had a nice talk with her.

This morning, Conny handed in the keys of her former home, where she lived for fourteen years. In the past months we spend a lot of time moving things to our come and cleaning her home. Hopefully, we will have some time for other activities, such as searching for border poles and visiting exhibitions.

I went to the city to get some recent passport photo for the renewal of my driver's license. At the shop I got another set of four of them and a medium sized portrait photo with me smiling for free. After this, I went to bookshop Broekhuis. There I saw the exhibition of Balance in Life with photographs by Jelle Rietveld as part of the Fotomanifestatie Enschede '21, which has the theme: Colors of Life. 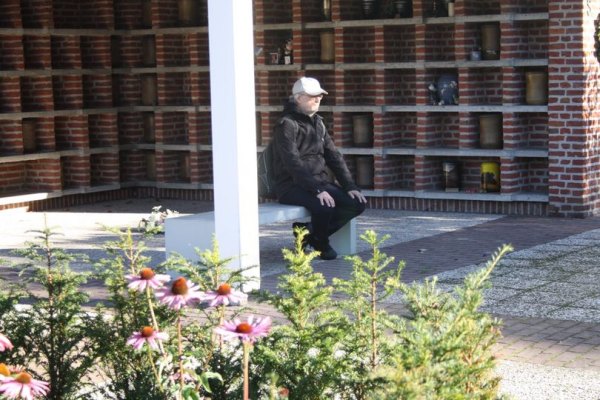 Conny captioned this photo: "The Bodhisattva of the Echinacea purpurea at Usselo." When we walk through the grounds of the crematorium of Usselo, I always sit here with my eyes closed and for some reason I often quickly get into a meditative state and experience a deep peace. Likewise today.

Now that I am approaching the age of sixty and having sufficient financial means to retire early, I notice that I have different requirements with respect to working conditions than my less senior (as in age) fellow software engineers. I also noticed that the standard job qualifications no longer apply to me. I am less interested in the language and tools that are being used or the application area. I no longer have the desire to 'develop' myself or being 'challenged' all the time. My requirements are primarily with respect to the working environment.
One of the things that motivates me is if I can solve some problem for others or help them in some way. So, having short communication lines with the users of the software that I develop, is something I like.
I like working in a team, but I also like autonomy with respect to what I work on. I do not want a 'boss' to tell me what to work on, but rather a 'product owner' that tells me which issues have the greatest priority such that I can make my own evaluation about what is the best thing to work on for me. (I tend to feel quite responsible and I have the tendency to jump onto too many things at the same time.) I also discovered it is nice to have someone to reflect on my work who is not directly involved with my work. I have had some bad experiences with Scrum and daily stand-up meetings. Although code reviews are a good method for finding bugs, the efforts of a thorough code review does not always weigh up to the results and if changes may only be applied to the main branch after a review, this might delay the development speed and require additional rework during merging. I prefer a more chaotic development method above a very structured one where there are a lot of administrative steps.
I also like my current working rhythm, which consist of going to the office on Monday, Wednesday, and Fridays to work six hours and working another six hours at home, usually three hours on both the Tuesdays and the Thursdays. I often spend these hours on one of the evenings or in the weekends if there is an issue that I would like to finish for one of my colleagues to use the next day.
I find biking to my office for at most 25 minutes one-way a good distance. Some years ago, I commuted for about 40 minutes and although I have no problems with biking that distance, I find it just a little too far under bad weather conditions.

Today, was the funeral of my mother. The chuch services was at 11 o'clock. The church was almost full, not only with family members, but also many from the town of Woudenberg. I spoke an in memoriam during the service. A neighbour shared also shared some memories. The woman leading the service also knew my mother, because she was quite active in the church, and also shared some memories. It made me realize that my mother was a well known person. After the service we went to restaurant Schimmel 1885, where we had a lunch with soup and sandwiches. There was not a formal opportunity for condolences, but people just walked around. I met with some of my cousins, most of which I had not seen for years. With some, I talked a little longer, with others only briefly. At the end of the afternoon, we had a private cremation with only the immediate family. This according to her wishes.

This afternoon, I visited all locations of the Fotomanifestation Enschede, but at one location there will only be an exhibition from November 11. I saw the following exhibitions:

This afternoon, Conny and I went to see the movie Dune: Part One for a second time. We both enjoyed it, even a little more than the first time. The first time I felt a bit empty after the movie, but this time I didn't. I think I now had more time to take it all in and perhaps less looking forward to the 'high points' from the book. This months interesting links
Home | September 2021 | November 2020