I was born on Wednesday, November 1, 1961 at 9:45 in the morning (CET). That means that today, I will be 61 years according to the calendar and 22280 days old. But how old am I really? The tropical year, the time that it takes for the seasons to return, is said to be 365 days, 5 hours, 48 minutes, and 45.19 seconds. Today, around 4:19 in the night, it was 61 tropical years since I was born. But the tropical year is shorter than the sidereal year, the time taken by the Earth to orbit the Sun once with respect to the fixed stars, namely 365 days, 6 hours, 9 minutes, and 9.76 seconds. That means that, tomorrow at 1:03:55 it will be 61 sidereal years after I was born. The average anomalistic year, the time taken for the Earth to complete one revolution with respect to its apsides, is 365 days, 6 hours, 13 minutes, and 52.6 seconds. That means that, tomorrow around 5:51:28 it will be 61 average anomalistic years since I was born.

Next we saw the exhibition Homo symbioticus with works from the collection selected by the Dutch author Atte Jongstra. The details about the works on display were printed on some sheets held together with a staple, but did not cover all the works on display. Incomplete list of the works I found noteworthy:

Next we saw the Carlijn Kingma: The Waterworks of Money. I found the following works noteworthy:

We walked through the rest of the museum.

When walking back to the entrance through the corridor, we saw the exhibition The Setting of Violence: A photographic approach to Pier Paolo Pasolini's Saló o le 120 giornate di Sodoma (1975) by photographer and visual artist Rein Jelle Terpstra, which has editted frames from the film that show the many prominent futuristic paintings on the walls.

At 15:24:57, I bought the book Atlas van de wereldgeschiedenis: de geschiedenis van de mensheid in 515 kaarten written by Christian Grataloup, translated by Henriette Gorthuis from French into Dutch, published by Nieuw Amsterdam in 2020, ISBN:9789046827321, from bookshop Broekhuis for € 19.95.

This afternoon, Conny and I visited the Waterliniemuseum, which a museum is about the Dutch water lines, which by means of indundation were used by defend against attacks by foreign countries. The museum is inside the fort near Vechten. This fort is one of about fifthy that are part of the New Dutch Water Line, which was meant to defend the provinces North Holland, South-Holland, and the west part of Utrecht including the city Utrecht. The old water line did not include Utrecht.

Next, we visited Castellum Fectio, which is just west of the fort. It is part of the Limus Germanicus, the northern border of the Roman Empire and the unsubdued Germanic tribes. The next castellum (fort) to the west, is Traiectum, which is located in the center of Utrecht. The book Limes atlas has some interesting maps explaining the position of limes and the various Roman forts in the Netherlands.

We went to Utrecht were we are going to stay for two nights. On the way to a Greek restaurant, we visited the bookshop Steven Sterk. At 17:55, I bought the book Actie-Reactie: 100 jaar kinetische kunst written by Serge Lemoine, Marianne Le Pommeré, and Emily Ansenk, edited by Charlotte van Lingen, written in Dutch and published by Lannoo in 2018, ISBN:9789401456234, for € 12.50.

After having our dinner at the Greek restaurant in one of the wharfs at Oudegracht, we walked through the city center, looking at some of the light art works that are part of Utrecht Lumen. We visited:

This morning, Conny and I, walked through some of the many alleys in Utrecht. We walked through the following (where the numbers in square brackets refer to the numbering used in Stegenboek, rapport en kaart): Around noon we arrived at the Domplein (Dom Square), which is where the nave of the St. Martin's Cathedral (usually refered to a the Domkerk) used to be, which on 1 August 1674 was destroyed by a summer storm, maybe including a bow echo (see: A reconstruction of 1 August 1674 thunderstorms over the Low Countries). The nave of the church was never rebuild. We did the DOMunder tour. After some introduction, we descended under the Domplein to view the excavations. These excavations proved the presence of the Traiectum and established it location to included the current square. It was interesting to hear the 2000 long history of the square.

At the end of the afternoon, the evening we visited bookshop Broese at the new location that they moved to. I was a bit disappointed. The shop felt very crowded and the amount of ramsj (sale of new, hard-to-sell books at reduced prices) has been reduced greatly and placed in a 'corner' of the shop. The exact science section of the bookshop had no books on math and physics, but did have a lot of management related books.

We had dinner at Silk Road, where we had dishes from Route 1: naan, zeitun, hummus, muhammara, murgh massale, kofte, tabouleh, bahar, and Route 2: naan lahasun, baba ganoush, hummus mazara, dahl, tajine, dopiazza gosala, salat mazara, kaeng kari kai, plov. We also had some desert. Although the dishes did not look large, it was still enough and definitely a very nice experience with a lot of interesting tasts.

We also walked through some alleys, the first two on the way to the restaurant. These are:

We also saw the light art work of Utrecht Lumen at Buurkerkhof.

Conny and I visted Castellum Hoge Woerd were we saw the exhibition about De Meern 1, a 25 meter long Roman ship that sank due to an accident based on the fact that many tools and personal items were found in the area the cabin was located. A unique find and quite interesting. We also saw the exhibition Natuur in Eenvoud with sumi e painting by Martha Goedings and raku creamics by Anke van der Kwaak. We also visited the museum with many archaeological finds, but we did not find any information about the roman castellum, if it was indeed located at the location of the Castellum Hoge Woerd, which has the form and size of the castellums found in the Netherlands.

The temperature at Twenthe Airport has gone up to 15.3° Celsius, which breaks the previous record of 14.9° on this date in 2015. This is the tenth warmest day record of this year. Below a picture that I took this morning of a Garden marigold (Calendula officinalis) flower, which I sowed on Sunday, April 10, 2022. The normal flowering periode is from may to november. 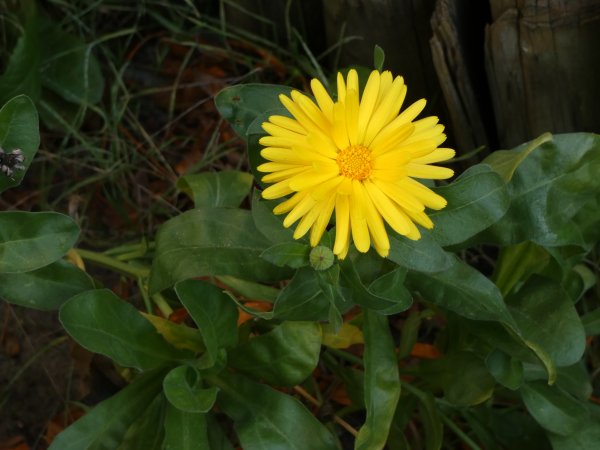 In the past weeks, I have been working on trying to prove that it is indeed possible to create infinite irregular grids of squares and equilateral triangles. I wrote a program for manipulating vertex labeled graphs. The program constructs two vertex labeled graphs, calculates the product of these graphs, prunes any dead-ends, and checks that all edges in the original graphs is still represented in the product graph. If that is the case, it means that there is a matching between the two graphs (on the labels) such that for any infinite walk in one them, there is also a path in the other graph. Because the two labeled graphs are related to the edges of all possible sequences of triangles and squares, it proves that above and under any sequence.

This morning, when I biked to my office, I saw some patches of snow. I saw some layers of snow on some car roofs and from this I conclude that about 0.5 to 1cm of snow fell during the night. Only at the end of the night (after 5 o'clock) the temperature dropped below zero, reaching a temperature of -1.4° Celsius at Twenthe Airport. The night before the temperature dropped to -8.2° Celsius, which is not a record, but this rather exceptional. In the middle of the province Overijssel one weather station reported 4cm of snow.

I went biking to the city center. I walked to Fotogalerie Objektief where I saw the exhibition Bomen in het park (Trees in the park) by Ruth Lowie. I went to Concordia, where they did not have any new exhibition. I looked at the books at the low round table in the middle of the exhibition Doublet: Thijs Ebbe Fokkens & Silke Schönfeld and I made notes of the titles of two of them: The Immortality Key: Uncovering the Secret History of the Religion with No Name by Brian C. Muraresku and being aware of being aware by Rupert Spira. I also visited bookshop Broekhuis, where I spend almost an hour looking at the new arrives. When I noticed that the sun was about to set, I decided to go home, to enjoy the last light of the day while going home. On my way home, I took the following picture on the 'square' called Usselerplein, there where the Usselerweg ends at the Denneweg and continue into the Zweringweg (position in street view). 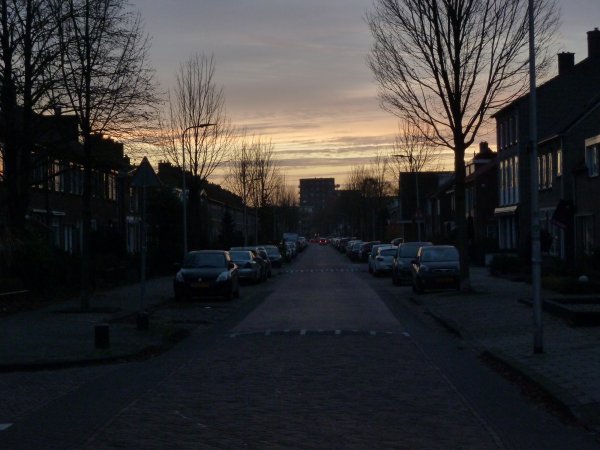