Around 11:15 this morning, the 8-year-old boy Jesse Dingemans was killed in his school Klim-Op in the town of Hoogerheide. At first it was reported that he was killed by his father. Later a 22-year-old man was arrested and it became known that his father is the manager of the office of the Rabobank in Halsteren. This crime was reported by CNN. None of the children witnessed the killing because Jesse had gone back to his class room to fetch something after he got permission from his teacher while the were working elsewhere in the school.

Yesterday, I read on some page, that according to Noam D. Elkies the number of domino tilings for an MxN rectangle is 2^(M*N/2) times the product of ( cos^2(m*pi/(M+1)) + cos^2(n*pi/(N+1)) )^(1/4) over all m,n in the range 0<m<M+1, 0<n<N+1. I found this quite a surprising result, and this evening, I wrote a small program to verify the result, and it seems that the result is correct. Some years ago I calculated the number of domino tilings and the results can be found here. 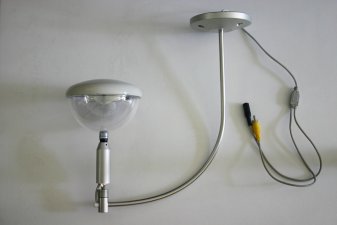 Today, I came across the image shown on the right. I found it on the web site of Nanophotonics. At first I thought it was a kind of lamp, and I think that is what most people think it is. But it is actually a wide angle camera.

This afternoon, I was biking behind Arjan and Erik from the Dutch "Beauty and the Nerd", when I went to a meeting in Hengelo. Most of the time they were biking behind each other. One of them was wearing a string in his hair. They were biking a little faster than I. I lost sight of them when they just past through a green light at the first traffic lights in Hengelo. I guess they returned home from the university. This evening, we watched the program again.

This evening, Annabel and I, watched part of the video chat of Arjan and Erik which they had yesterday. It must have been Arjan biking behind Erik when I saw them, because Arjan is the one still having a string in his hair. During the chat they tell that they live on the Campus of the University of Twente in Enschede. It is possible that yesterday they were on their way to the studio of RTV Oost.

This evening, I went to the university to play Go. I had taken a board and stones with me. I had to wait some time before Araldo arrived. When a little later, Taco arrived, I let them play on my board, because I still wanted to wait for Ton. Not much later Rudi arrived and we decided to play, and quite if Ton would arrive. But Ton did not come. Edze did come and he first watched Araldo and Taco for some time, and then watched us. I had gotten nine stones ahead of Rudi and in the end I lost with 39 points.

There are indications that Li-Xia is suffering from Early-onset Alzheimer's Disease. Earlier this year she started to have problems with her memory and I advised her to seek some information on this. On June 1, someone came to test her, and we both were a little surprised by how bad she performed. She also did not score very well on the Visual Association Test. Later, I discovered that this is strong early indicator for Alzheimer but also occurs with people with a depression. 0n October 9, we went to see a neurologist, and Li-Xia was given an a psychological exam (on October 19), a lumbar puncture was performed to examine her cerebrospinal fluid (on November 7), and a MRI was performed on her hear (on November 10). Today, we went back for the results. On one hand, Li-Xia was quite happy that there is now an explaination for her problems. For the rest she seems to accept the situation quite calm, realizing that there is not much to do about it. The neurologist prescribed some Reminyl. (Dutch medicine information for Reminyl.) In the evening, I showed Li-Xia information folder in Chinese. At the moment she feels quite well.

When Annabel came downstairs this morning, she remarked that felt that she had become taller, and asked if I could measure her. She is now just one centimeter shorter than her mother. It looks she grew two centimeters in the past month. But maybe she is just taller because we measure her length in the morning, and the last time in the evening. But without doubth she is getting taller.

Today, Li-Xia started with the Reminyl. Till noon she felt okay, but during the day she felt worse and worse. Around eight o'clock in the evening she even had to vomit. She stayed in bed from till about four o'clock in the afternoon and did not eat much.

When I came home from the city this afternoon around three o'clock there was a beautifull complete double rainbow visible. The others also saw it, and Annabel and I took some pictures.

Formation of a coalition

In our political multi-party system, parties have to form a coalition in order to form a government. The result of the last election are such that the formation of a coalition is going to be difficult. Yesterday, it became known that the most obvious coalition did not work out. This means that a second round will be started to determine what is the next most likely coalition to be investigated. This is a rather slow process in realizing a coalition. I wonder whether there does not exist a more mathematical method to arrive at a coalition. Maybe there should be some voting. For example, one could use the procedure where every party expresses their favours for a certain coalition, and than based on the number of votes they got, one can calculate which is the coalition that has the largest support among the people.

This evening, Annabel and I went to the university to play Go. When we arrived, Ton and Juri were already there. I had brought a playing set with me, and invited Ton for a game. It has been a very long time, that I did not play against him. Soon some others arrived, but nobody with boards and stones. Finally, someone borrowed a set from Fanaat, and decided to play Ren-Go with seven persons, Annabel being one of them. My game with Ton started good, but later on I made a mess of it and finally decided to resign, because my position was hopeless.

I finally feel some motivation to learn Chinese, because of the possibility of Li-Xia losing her ability to speak English and Dutch in the coming years. I downloaded many MP3 files from Chinese in 10 Minutes a Day, and listen to them while I did the dishes. Maybe I could also download the MP3 files from Conversational Mandarin Chinese Online. 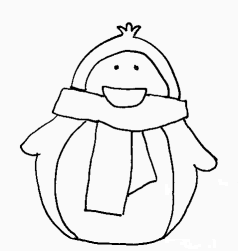 Annabel has been busy making Christmas cards for the children of her class. She asked me to scan a drawing of a pinguin that she had made on the basis of some sample.

Finals of the Beauty and the Nerd

This evening, we watched the finals of the Dutch "Beauty and the Nerd". This morning, I already read on the website of a local newspaper who are going to win. This is because tonights broadcast is a repeat of the broadcast of yesterday evening, which we did not watch. Erik and Racheal won the contest. They won € 25.000 and a trip.

It was a busy evening. First I had to bring Andy to his Christmas party on school. Next I had to bring Annabel to a church where her church celebrated Christmas, and from there I went to get Andy. Then arround eight o'clock I got Annabel from the church and from there I drove to the university to play Go. When we arrived, Ton and Judi were playing on a set that Juri had brought with him. They told us that Araldo also went to get a set. Not much later the others arrived and Annabel and I ended up being left over. We first played a 13x13 game, which I lost. Then we played a 19x19 game, which I won because I killed one group. Because Ton and Juri also finished their game around half past nine, Ton invited me for a game. We played a light game till about twenty past ten. He won, because I lost one group, but otherwise I would have won clearly.

When I was playing with the puzzle, I asked myself how many ways there exists to put the six pieces consisting of one of each colour except the colours white and pink inside a five by five square. I quickly found a solution but had a hard time finding another one. My nephew also gave it a try, but could also not find another solution. I told him that at home I had a program with which I easily could check this. When I tried it at home, it did only find the eight equivalent solutions. So there is only one way to put these together, and that is:

I also worked on extending the program to include the 5 by 6 solutions, but this proved to be much harder, because there are so many more solutions, that the program did not terminate within reasonable time.

This morning, I continued working on the program. Because there are 874 unique 5 by 6 solutions, this means that there are 12222016 non-unique ways to put two solutions on top of each other to form a 6 by 10 solution. Of these 6609208 do not have pieces of the same colour touching each other. Luckily, these only result in 68054 different right sides.

During the day, I discovered that the greatest performance problem was in the collection of coloured columns that can occur. I replaced the linear list by a tree structure. That gave a great boost, but I estimate that the program still will take about 66 hours to finish the complete computation.

This evening, Annabel and I visited Ton and his children Sara and Titus. We also brought the Chinese Wooden Puzzle with us. Both Titus and Sara solved it. And Annabel also solved it one more time within a few minutes, and without any back-tracking. Ton and I played two games of Go. I resigned early during the first game, because I lost quite a big group of stones. During the end of the middle game of the second game, it seems I was going to lose again. I made some "desperate" move to reduce his territory. And then after some more moves, Ton got into some big trouble and I managed to capture a group of his, after which he resigened. Annabel also played two games. One against Titus, which she lost by a few points, and one against Sara, which she won after Sara resigned. Ton guessed that they are all around 20 Kyu now. I am now playing with a six stone advance against Ton. He too has become stronger in the past year. I guess my strenght is now around 14-15 Kyu. The children also played up stairs in the attic which is a very large and nice play room. Annabel built a house from blue foam bricks with adhesive layer, which seems to be some kind of waste product that Ton got from some company. Annabel likes it very much.

This morning, 4 o'clock in the morning, Saddam Hussein was executed. Late Friday from his ranch in Texas, President Bush from the U.S.A. said "it is an important milestone on Iraq's course to becoming a democracy that can govern, sustain and defend itself, and be an ally in the war on terror." This months interesting links
Home | November 2006 | January 2007 | Random memories