Today, was our second day of our second trip to Maastricht. At the end of the day we went into the city. At the tourist office, I bought a city map of Maastricht. We also came across the "De Slegte" bookshop in Maastricht. There we found a stack of "Maasticht 148" books. We looked through the shop which consists of two buildings which are connected through a stairwell with a small elevator. Finally, we decided to buy one copy of the book "Maastricht 148", because it only costed € 7.50, and because the first copy is becoming worn out.

This afternoon, Ton contacted me to ask if Annabel was coming this evening to play Go, because in that case Sara, his daughter, also wanted to come. I contacted Annabel, who was staying with a friend since Sunday, to ask her if she wanted to go. She wanted to go and we agreed that I would catch her around half past seven. It was only when I was on my way that I remembered that Annabel had brought her four guppies with her. Because we did not really have time to go home first, we ended up taking the guppies with us to the university. We were the first to arrive and noticed that the bar was closed. Not much later Ton and Sara arrived, and Sara started to play against Annabel. When the others arrived, Ton and I started a game, after we first played some games of Hex. I was given five stones ahead, and it looked I was giving Ton a hard time. But, of course, I made some mistake, and soon thereafter resigned because my position had become hopeless.

Just like last year, Annabel and I went to the Go tournament in Apeldoorn. Yesterday evening, Annabel already wanted to play some game against me, to prepare herself for this tournament. We enlisted her as 20 Kyu and I myself as 15 Kyu. She won four out of five, and won € 10. I only won two out of five. When we went home it started to rain a little, the first (substantial) rain in more than six weeks.

Today, it rained almost the whole day. I dislike rain, but still I was happy with it. We desparately needed some rain. I found an interesting graph about the water shortage, the balans between evaporation and rainfall. The red line shows the driest year on record. Black is our current graph. Green represents the average of the 5% driest years, and blue is the overall average. Annabel went to soccer training, and although all her clothes became wet, she enjoyed it. I do not know why.

I wrote a program to analyze the results from the tournament we joined last Sunday. The program just calculates a percentage score taking into acount the percentage score of your opponent, and this with 1000 iterations. This results in the table below. In the third column the official ranking is given. The last column gives a "calculated" strength, assuming that the strongest player was 5 Dan and the weakest 22 Kyu. It should be noted that the program does not take into account the reduced handicaps that were given in the last round to some players weaker than 12 Kyu.

When this evening we arrived at the place where Andy is going to stay for the weekend, we saw a beautiful double rainbow. I immediately took three pictures. I took one overview picture and two detail pictures.

This evening, I watched the movie K-PAX. It is an interesting movie, because till the end it is not clear whether Prot is really an alien from the planet K-PAX or a man suffering from a delusion. There are some facts supporting that he is an alien, where I find that his eyes can see ultra-violet light the strongest. (Although, it might be possible that some humans, due to some genetic variation are able to see ultra-violet light.) But at the end of the movie it is suggested that Prot "borrowed" the body of Robert Porter, and it would be a little strange that he would have extra human vision, especially because it is a physical property of the eye. And then it is strange that he did not disappear when he left, but the movie suggested that Betsie, some other person from the ward, did. And he too was "gone" for several days during his stay in the ward. And why would Prot leave his notes behind? Anyway there are many unanswered questions. One could image that a society does not have families. There are even societies on earth where the tribe plays a more important role than the family, or at least where the extended family is more important than the family as we know it in the western world. But still I believe that beings from an intelligent race would require their parents, or at least there mother for their upbringing. But what I find even more stranger is that at K-PAX intercourse is not a nice experience. How could this ever have developed from an evolutionary back-ground. What would be the reason for a species to develop "unpleasant" reproduction.

Where is my star?

Today, I have been employed by my current employer for five years. As a present, a star was named after me at Online Star Register under registration number 60142780. The coordinates are: 07h53m;+39°28'. But when I looked at sky-map.org at these coordinates, I could not find a star. The closests stars are: It seems that close to the coordinates there are two galaxies.

Today, Annabel and I went to the European Go Center in Amstelveen to join a rapid Go tournament, where rapid means 30 minutes playing time per person. There were also a normal multiple day tournament (with one and half hour of playing time per persons) and a childrens tournament going on. This was all part of The 36th Allshare Amsterdam Go Tournament. There were about 13 persons joining the rapid tournament. The tournament administration was done on some small note papers. In the first round games were chosen at random. In the next four rounds the score (number of won games) was also taken into account. A very simple method, but rather effective. In the first round I played against played against Els (3k) with nine stones ahead, and I lost with 72 against 21. Annabel lost from Tonny (4D). In the second round I lost from Martij (14k) with 74 against 36. In the third round I won from Sanne and Annabel lost from Annemarie. In the fourth round I lost from Rob (10k) with 73 against 46 points and Annabel lost from Sanne. In the last round I won from Justines (6k) with 81 against 74 and Annabel lost from Martijn with 8½ points.

Biking to the University

Because of the nice weather, Annabel and I decided to bike to the University to play Go. When we arrived we found Ton and Juri sitting by the waterside. I had brought a set with me and invited Ton for a game, but he felt that maybe Annabel should first play against Juri. A little later, Marcel and some others arrived, and Ton and I started to play against each other. We decided that I should get six stones ahead. I was a little to opportunistic in attacking Ton, and I lost a group and created a weak group. The final outcome was that I lost with 40 points. Annabel lost with just one point with nine stones ahead, which, if Juri did not do this on purpose (as some strong Dan players like to do), then she played quite nice.

It was around ten that we biked home. Near the "harbour" we took some pictures, because there was a quite nice view with nice colours in the sky. Picture of the view.

This morning, Annabel told me that yesterday she overcame her biggest fear, her fear for snails (which is called Gastropodophobia). Or maybe it was her fear for slime (Myxophobia). She told me that yesterday, some friend in school put some snails on her hand. Annabel totally has no fear for spiders, but earlier this week she was terrified by the sight of a moth. Probably she has no fear for spiders, because we always let them run around the house, instead of killing them or putting them outside.

Today, Li-Xia and I went into the city. After we first bought some grapefruits and some vegatebles, we had lunch at Camal Grillhouse Shoarma Restaurant. We ordered the usual. Although bad weather had been forcast, we could sit outside. We heard some sound from the International Jazz Festival Enschede. Next we walked to Bookshop De Slegte, where Li-Xia bought the Dutch version of "Improve your IQ", and I bought the book "Images of the Universe". 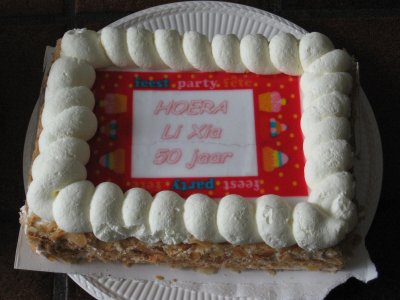 Today, it is Li-Xia's 50th birthday. In the morning we went to church and from there we drove to my mothers place. There we met the rest of the family. My sister had bought some cake with some text on it (as you can see here on the right). Li-Xia ate the slice with "50" on it. In the evening we had a cook-yourself dinner. The orginal plan was to have a BBQ, but because of the bad weather forcast, it was decided to cancel this, but it turned out that the weather was okay, and we could have done it.

This evening, I got Annabel from some friends house. She had been a Pentacost conference with this friend. She showed me a piece of paper with the signature of Sharon Kips who performed during the conference. Sharon won the Dutch X-Factor competition. This months interesting links
Home | April 2007 | June 2007