Today, I got an email from a lady in Canada, who shared her experience with random memories which for no apparent reason come to her mind. When I googles on "random memories" and "apparent reason", I found several people describing the same phenomenon. These are Marcus Strapp, So it goes, The brain and complexity by Rob Sullivan, and this guy's place.

Today, Annabel appeared on Dutch television for the second time. Again it was just a few seconds, but many people reported to us that the saw her. We did not see it ourselves. This morning she went to EO Jongerendag, the youth day of the Dutch evangelical broadcast company. During the talk of Kees Kraaijenoord there was a shot of some the public in which Annabel appeared.

This morning, Gerhard achter de Molen, was preaching in our church service. He gave a witness of what happened two weeks ago at a pentacost conference, which Annabel attended. He, with two others, was responsible for the teenagers. And as usual they had a prayer and healing service on the Sunday evening. He told us that these kind of meetings are not his things. When the evening had come, one of the leaders asked if there was anybody with deafness in the right ear. Gerhard told us that he somehow did not feel at ease. They were standing in the midst of the teenagers, and all those who had deafness in the right ear were asked to stand. The leader prayed from them and asked if anyone had experienced some healing, but they all noded no. Then the leader asked the third leader to pray, and he prayed too. And again non of the teenagers did not experience any difference. Gerhard feared that he would be the next one to be asked to pray, but he felt releaved when the leaders suggested that everyone would pray. And when they did this one after the other teenager stood up to tell that they had been healed. Gerhard was quite skeptical about the healing, being afraid that they were reported in the heat of the moment. One of the girls he asked to return the next morning at then o'clock. Then on Monday when she arrived she told him that she had been deaf in her right ear since birth and that she could hear now. Then there was another girl telling that she could no longer stand the noise inside the tent (the conference meetings were being held inside tents) and she had to wear plugs.

Some weeks ago, we were contacted by an old friend. Twelve years ago, she stayed in Enschede with her family for 10 months. She also attended our church and I translated for her. Yesterday evening, Li-Xia and I went to catch her from the railway station. She is from Taiwan and works for the Forestry Bureau in the area of wildlife preservation. At the moments she attends the SITES conference in The Hague. She went with us to church and afterwards we walked through the city and took some pictures (one of use before our church) at places that she still remembered or that had changed a lot. We walked with her to the station where we ate something at Burger King before she took the train.

Yesterday evening, we had some hail and lightning (but not much thunder). This morning it was even on the news that some tunnels had been flooded. When I came close to the railway station close to my office, I noticed some firemen, and I went over to have a look. The tunnel under the railroad had been completely flooded. Then I remembered that I had seen some people walking through another tunnel, realizing that they had came from the other side of the railway station. In the tunnel there is a sandwich bar at the bottom a cone shaped building which is called "De Puntmuts", the pointed hat, where my colleagues often go to buy some sandwiches. The bar must have been under water almost to the ceiling. I took a picture of the tunnel. Later I heard that we had 48 mm of rainfall within a 50 minute time frame.

This evening, Annabel and I went to the university to play Go. When we arrived we saw Juri play with some we did not know. It was a student from out of town who had seen Juri with a Go board and asked to play a game with him. He mainly plays through KGS on the internet. Not much later Araldo game with the game Twixt under his arm. He asked Annabel to play it and they played it for some time. When the student left, Juri and I decided to play because all the others who had arrived in the mean time, already were playing with each other. We decided to on a six stone handicap. After Annabel finish playing Twixt with Araldo, they played a game of Go, where she got nine stones ahead and 50 points Komi. She lost with two points. Juri and I were quite close, until I made a small mistake, and than I just wanted to finish the game. In the end I lost with 58 against 46 points. Juri felt I did not make any big mistakes, but he showed me that I could have attacked him a little more aggresive at certain points.

Today, Li-Xia had to go the the hospital for some minor surgery. Yesterday evening, I looked up some information with respect to general anaesthesia and Alzheimer's Disease. I found the following interesting references:

This morning, I brought Li-Xia to the hospital and expressed our desire to have the surgery performed under local anaesthesia, and that is how it was done.

The girl who played Go

Yesterday, I bought the book "De go-speelster" ("The girl who played Go", original title: "La joueuse de go") by Shan Sa for just one Euro at a sale. When I showed it to Annabel, she immediately wanted to play Go with me. We played several games and also today we played at about six games. At one point she wanted to start recording the outcome of our games, because she wanted to know how strong she is. When we play at her playing speed, we are about equal, I guess.

This evening, I went to the University to play Go. There were quite a lot of people, even some people I have never seen before or not for a long time. Ton first wanted to play a game of Hex with me on a new wooden board he had brought with him as a gift to the club. On one side it was a regular 19x19 board, on the other side it had a 12x12 Hex board. This is one of the last times that he will come to the club, because he will be moving to another part of the country.

I got six stones ahead in my game of Go with Ton. But it did not go very well. In the end I lost with 50 points. At one point he remarked that he had made a mistake and that he was going to resign if I would make the right move. But I did not see his error and made the wrong move. Then I played some two games with one of the new persons on a 13x13 board. One I lost the other I won. Then I watched Ton play some Hex games. 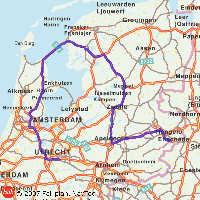 This evening, in preparation of our trip tomorrow to a congress for/about Early-Onset Alzheimer's Disease, I checked the website of Dutch AA/AAA for the shortest route. I really had to laugh as the proposed route was taking us over the Afsluitdijk (Closure-dike) using a gigantic detour. Look for the purple line for the suggested route on the map on the right.

This afternoon, I talked with the teachers of Andy about his progress. They were quite happy with him and said that they were going to miss him next year. He interacts much more with the other children compared with the start of the year. He also started to tease certain children and he knows exactly who to pick. The too noticed that he has become very clever with the computer. In the classroom he usually watches another boy playing with the computer, but the otherday, when the taxi was late, he played all by himself. He now had no problems handling a mouse. Next year he will go to another class, as most of the children in his class.

This evening, I went to the Musical "Plexat" performed by Annabel and the children of her class. In the past months they spend many hour rehearsing this musical.

This evening, we were having some problems with our ADSL modem and I had to reset it. But I lost the manual and I had to go to my office to check find it on the Internet. But I first dropped Annabel off at the University because she wanted to play Go. When I came back, she told me that she had defeated Huub, one of the new persons that came last week. She had given him five stones ahead and still had won with 38 points. While walking back to the car she explained me some of the details of what had happened and she was using all kinds of terms showing that she really understood what she had been doing. She is really becoming clever at planning things ahead. Last week she very clever played some ladder saving moves, without me even noticing it until it was too late. This months interesting links
Home | May 2007 | July 2007 | Random memories