Pictures being an insult

Today, the Gemeente museum Den Haag (Museum of The Hague) announced that they will not exhibit the pictures and the video by the artist Sooreh Hera because they might be an insult to certain parts of the Dutch society. The exhibition consists of pictures of gay people. One picture is of a gay couples from Iran that are wearing masks with the faces of Mohammed and his brother Ali. She herself is from Iran and has made the pictures because she wants to make a statement with respect to homosexuality in Muslim countries. She states that in countries like Iran and Saudi-Arabia gay people are prosecuted, but that it is rather common for married man to have homosexual contacts. The pictures are compiled in the video which besides Muslim symbols also contains Christian and Jewish symbols.

Last Thursday, the director of the museum, who selected the works, told that he was not aware that the masks depicted Mohammed and Ali, but that he as a museum director does not use political criteria and that he did not think about security issues. He simple found the pictures exceptional. I guess that due to the media attention that was given to this exhibition he changed his mind and decided that the works should not be displayed. He is probably afraid for the reactions from a small group of extremist Muslims in the Netherlands. I never remember a case where a Dutch museum decided not to display a piece of art because it could be an insult to certain Christians or Jews (or some other group) in the Dutch society.

In the past weeks, two people have announced that they are making a short movie which might be offensive to Muslims. The government has expressed its worries about this as it has been suggested that one of the movies might display a Qu'ran being torn to pieces. There was even an interview of a Muslim leader stating that the Qu'ran may not be touched by people who are unclean. (I have seen copies of the Qu'ran in Dutch bookshops, so I wonder how that would be 'legal' in the view of this man.)

Although Muslims are a minorty in the Netherlands, one must conclude that they already held a priviledged position in the Dutch society. By giving in to certain threats, this priviledged position is established even further. It seems as if a small group of extreme muslims is given room to keep the whole society hostage. I wonder how our country will look in thirty years from now. Will sharia law be implemented in our country or in some parts of our country?

Yesterday, in an attempt to verify the program for finding solutions for the Chinese Wooden Puzzle I let the program search all the solutions within a 6 by 7 frame two of each kind of piece leaving out the T and U pieces. It found 5124 solutions. When only looking at the colours (matching the types of pieces) there are 3136 solutions. Further analyzes showed that these solutions contain exactly the four orientations of 784 unique solutions. From this one could conclude that the programs does not contain errors, but that for some reasons the output file for the 6 by 10 frame (with two copies of all types of pieces) is incomplete and that the program was terminated before completion. Today, I wrote a small program to measure the 'compactness' of the solutions found for the 6 by 7 frame. 'compactness' is defined by adding the smallest possible rectangles for each type of piece that cover the occurences of this piece. One of the most 'compact' solution was:

And the least 'compact' solution was:

I ran the program again for finding solutions for the Chinese Wooden Puzzle with two pieces of each kind in the 6 by 10 frame. This time the program produced a 28 Mbyte output file, almost twice as long as the first time. Analyses showed that it contained 439840 solutions. When only looking at the colours, it contained 263904 different solutions. Furthermore, I found that these solutions contain exactly the four orientations of 65976 unique solutions. From this I conclude that the programs do not contain errors. One of the most 'compact' solution was:

And the least 'compact' solution was: 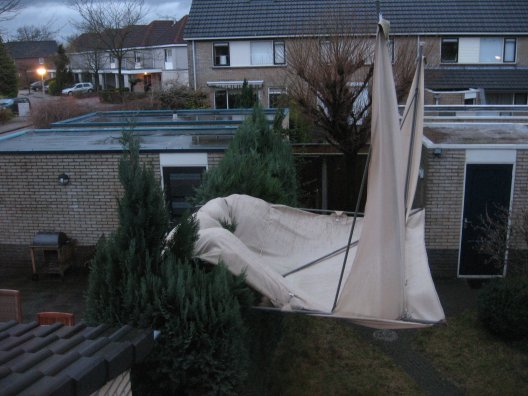 When Annabel went outside, she was scare stiff for a second. The party tent of our neighbours had been blown upside down on top of the hedge separating the gardens. It looked quite funny.

The Chinese Wooden Puzzle keeps me occupied. I have been thinking about the solutions for the 6 by 7 frame that I found earlier this week. I noticed that in the solutions that were found it often happens that the pieces with of different colours occur in the same shape, and that one can swap the pieces, while keeping the other pieces in place. If solutions where only colours are swapped are considered as equivalent than there are 620 unique solutions in the 6 by 7 frame. Furthermore, I discovered that there are solutions that contain a horizontal division line, meaning that there is a horizontal line that is not crossed by any piece. It means that one easily can rearrange the two parts above and below this horizontal line. This brings down the number of unique solutions from 784 to 751 and 620 to 602. Today, I wondered if there there would also by a solution with a vertical division line. I tried to find it by hand. It was quite hard, until I started search systematically. Then I found:

I showed it to Annabel saying that I believed that it was the only possible solution. While she was trying to find a solution by herself, I wrote a little program to search the solutions I found by the program. After a while, she came down saying that she had found a solution but that she thought it was the same that I had found. Meanwhile, I already had discovered that there is only one solution (except with it obvious permutations) that has a vertical division line.

This evening, I went alone to the university to play Go because Annabel did not want to go with me. When I arrived, Araldo and Taco already had started playing a game and Rudi was watching them. Rudi invited me for a game and I was given nine stones ahead. Although I made a good start, thing quickly went wrong. I lost several groups and after I made some more "beginner" mistakes, I decided to resign. I continued watching the game between Araldo and Taco till the end.

Today, I joined the Christmas party of our company. We left shortly after four o'clock with the players coach of F.C. Twente. It was a nice coach with tables and chair facing each other. Around six o'clock we arrived in Amersfoort. The navigations system that the driver followed took suggested a small road that the coach could not take. After some wandering around, we finally arrived at Het Bergpaviljoen. We first had some drinks. The dinner started around eight. As a starter we had "Wortel en Koolrabi: Terrine van zoetzure wortel en koolrabi met een mousse van geitenkaas, gembergelei en kummelkoekje." For the main dish we had "Hert: Hertenfilet met sukade en rode kool, spruitjes, spekaardappelen en wildjus." And as desert we had some custard covered with caramelized sugar and some ice cream. Of course, some coffee and tea was served afterwards. During the dinner, I talked with the partner of one of my colleagues who was sitting opposite of me, and my colleague who was sitting besides me. It was interesting to hear about her travels to Africa and India and the kind of work she did there. We also talked about my situation. After the dinner, I had hoped to sit a little longer at the table, but I was scared away by the loud music that was being played. I went to the entrance hall where I found some of my colleagues who too had run away from the music. There I read in the book Bekentenissen van een Filosoof (Confessions of a Philosopher) by Bryan Magee. Around one we left for home and took our Christmas hampers with us. Around a quarter to three we arrived at our office. I stayed there a little and then biked home, with my Christmas box on the back of the rack of my bike. Luckily it did fit, because it was quite a big box.

This afternoon, I went into the city. Of course, I did go to bookshop "De Slegte". When I walked into a part of the shop where I do not come very often, I discovered that they still have a whole stack of the Maastricht 148 books. I talked a little with a man who was standing by about our trip. Maybe we should go to Maastricht again during the spring.

This evening, Annabel and I went to the University. When we arrived, Araldo and Vincent already had started playing a game of Go. Not much later, Taco arrived, and we decided to play. I told him that I wanted to win and that I wanted to have nine stones ahead. He thought it was no problem. Annabel started working on her homework, and she continued doing this the whole evening. Afterwards she told me that if it would be a little more quiet she would like to come here every evening, because there are less distractions than in her room. Although I did have some good opportunities to win the game, I made some mistakes and decided to resign after I lost one of my corners. Although I resigned, I felt better than last week.

This morning there was a thin layer of snow in certain areas of the city. As there have been no clouds, the snow must have come from fog. Most trees were are so white, but for that no snow is needed.

This morning, Li-Xia, Andy and I went to my mother. Last Saturday, my mother came to catch Annabel to stay with her for some time. Yesterday, Annabel asked if she could stay till coming Sunday. I agreed to this, if she would study some English and history. We brought some books for her. We arrived just after noon at my mothers place. Some of my brothers and sisters were already there and the rest arrived a little later. We were with nine adults, eight children and a dog. Three of my nephews are already taller than I. In the afternoon, I taught one of my nephews how to play Go, and we played about five games on a 13x13 board where he could place five to seven stones on the board at the start of the game. He liked it a lot. One time Annabel finished a game against him which I had started. In the evening we had a cook-it-yourself-at-the-table dinner, a typical Dutch tradition where you fry your own food in a small dish on an electric stove standing at the center of the table. We had three such stoves standing on the table. The one I was sitting close actually was a stone grill. I cooked some pieces of fish, salmon and tuna, and som pieces of chicken, together with some unions, mushrooms and sweat pepers. And besides this, also something from the various salads and some pieces of baguette (French bread).

My name is Lisa 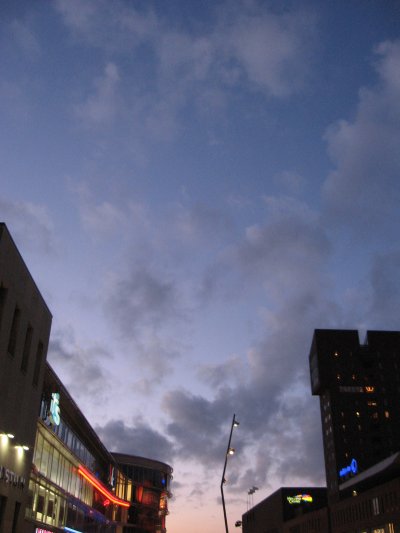 This afternoon, I went into the city and looked around some shops. When I came outside a large shop, I was impressed by the sky and took a picture. The clouds were slowly drifteng by. At the bottom they are dark behind the light sky, but at the top they are white from the sun that still shines on them. Quite impressive. This months interesting links
Home | November 2007 | January 2008