This morning, I went to get my new bike, a brown Urban HPV with a 7-speed transmission and frame number C01037006. Because I am using this bike for going to work, I can buy it with tax reduction. This bike is going to replace the Kronan Klassik that I bought on Monday, April 4, 2005. I decided to buy a bike with a 7-speed transmission because I expect to bike much more now that Li-Xia lives at a care home on the otherside of the town.

Last Saturday, I watched the movie Proof (2005). I did find this an interesting movie and bought the DVD second hand, which I watched last Monday again, first only to check if it was okay, and then having to watch it till the end.

It seems that in order to proof that an algorithm runs in polynomial time, on needs to identify a polynomial of a certain order. It also seems that the order definines the maximum number of nested 'loops', but that it not true. It is possible to think of an algorithm where the number of nested 'loops' depend on the size of the input, where each deeper loop runs in a smaller power than the surrounding loop.

Today, I came across an article about curcumin and vitamin D-3 in relation with positive effects on Alzheimer's Disease. For a long time I have been giving Li-Xia a supplement with curcumine. I do not know whether it has had any positive effect on her Alzheimer's Disease. But I do know that the amount of alergic reactions and itching has reduced and the last year it also seems that she has less problems with feeling cold. I do not know whether this is the result of curcumine, but it is possible, because it does have an anti-inflammatory effect. Curcumine is also said to have a positive effect on the liver and a relationship between the liver and Alzheimer has been suggested. The article noticed that for some people curcumine could have a negative effect on the absorption of amyloid beta. But vitamin D-3 seems to have a possitive effect on everybody. At least half a year ago, I started to give Li-Xia vitamine D-3. In the past months I have reduced the number of supplements that she gets, because swallowing becomes a bigger and bigger problem. At this moment she only gets curcumin and vitamine D-3.

Today at 11:07, I bought two math related books from bookshop De Slegte and I got one book for free because of the Boekenweek, the Dutch national book week. I picked the (second hand) book De Erfenis (The Inheritance) by Connie Palmen. The first book I bougth, is Het Wiskundeboek, the Dutch translation of The Math Book, ISBN:9789089980373 by Clifford A. Pickover, which costed € 14.95. The second book is Arabian Geometric Patterns, ISBN:9789057681561, published by The Pepin Press, which I bought for € 17.50. This book contains many Arabic Geometric Patterns. Some time ago, I was contacted by Brian Wichmann who informed me about the Tiling Database he maintains with assistance from Tony Lee. His site also hosts Tony Lee's notebooks. Lee also wrote Islamic Star Patterns. The site Taprats provides computer-generated Islamic star patterns. Many pictures and diagrams of Islamic geometric patterns can be found on Pattern in Islamic art.

We have a lot of sunny days. Today, it is the first time that my colleagues went outside during lunch time. Two years ago it was March 31 when they did so, but then they still had to put on their coats. 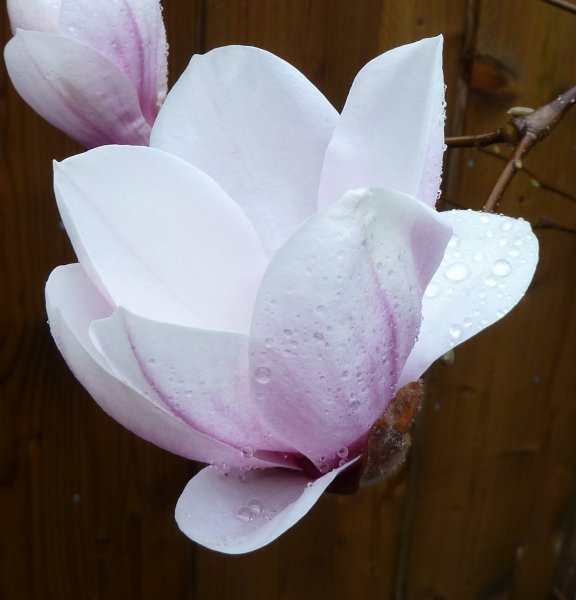 Magnolia in the rain

This afternoon, it started to rain for the first time after many days with sunshine. It just started raining when I left from the office. When I arrived at home, the rain had almost stopped. In the garden, I noticed that some flower of Magnolia had opened. I took some pictures where you can see the raindrops on the flower leaves.

In the past weeks, mainly while biking around the city, I have been thinking a lot about P versus NP. I am more and more becoming convinced that P is not equal NP. Today, I came across the paper Natural Proofs by Alexander Razborov and Steven Rudich. I had heard about this before, but now I am actually thinking about studying the paper. I am afraid that I have been mainly thinking about natural proofs in the past weeks.

Today, I read Pioneer Anomaly Solved By 1970s Computer Graphics Technique on the Physics arXiv Blog, and decided to submit a story to Slashdot, with a reference to this article. It was accepted by CmdrTaco himself. He did a little editting and added two links. This months interesting links
Home | February 2011 | April 2011