At 12:09:18, I bought the book Liefde is business by Arnon Grunberg from bookshop Broekhuis for € 4.95. Between pages 102 and 103, I found a beer felts from Chiangmai German Microbrewery & Restaurant. Possibly someone took this book to Thialand on holiday. 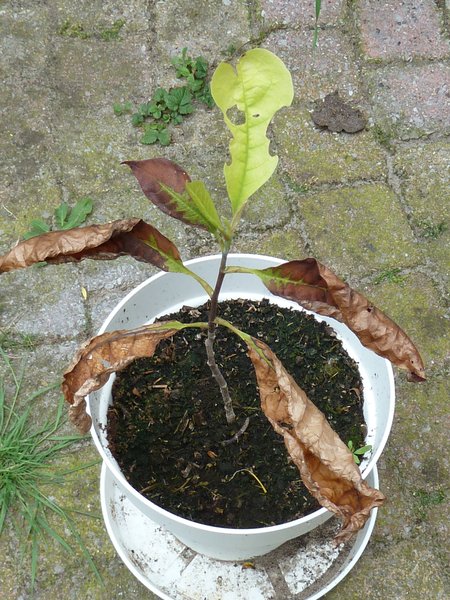 About a month ago, we placed the small magnolia tree in a bigger pot outside in the garden. Soon the leaves started to turn brown, probably because it was much colder outside than inside, especially because it has been rather cold in the past weeks, except for last week. Now two new leaves have appeared and a third is on the way. Only one of the new leaves is clearly visible in the picture on the right, and it has been partly consumed by some kind of insect (caterpillar). Although it looks more dead than alive, it looks like it will survive after all.

In the past weeks, I thought about the 'volume' of the icosahedron. It has 12 vertices, 20 faces and 30 edges. For this we need to observe all the possible vertix colourings with the colours A, B, C, and D. Because all the faces are triangles, and have to be coloured with a different colour taken from α, β, and γ, it follows that each edge colour will be assigned to 10 edges. This means that the Kempe chains in the dual graph (a docecahedron) of each type (αβ, βγ, and αγ) will have a total length of 20. This could either be one chain of two chains, because the chains must be a multiple of 4 and larger than 5, only the combination of a chain with length 8 and a chain of length 12 is possible in case of the two chains. If for each type of Kempe chain it would be possible to have two chains, it would be possible to have 3.3.3 = 27 different points, meaning that each edge could theoretically be assigned a different point, because 12 is smaller than 27. It could be possible if this is the case for one of the types, because 3.2.2 = 12. However, if we try to colour the edges when there is a chain of length 8, it turns out that this is not possible. Furthermore, for each vertex colour there will be exactly 3 vertices with that colour. And all the vertices of the same colour will be assigned the same coordinate. A rather boring result. There are four types of faces with respect to the colours assigned to the vertices, and we can count for each type how often the edge colours appear clock or counter-clock wise. It seems that the 'volume' is equal to three tetrahedron between the four points, when adding and substracting the facse by orientation. 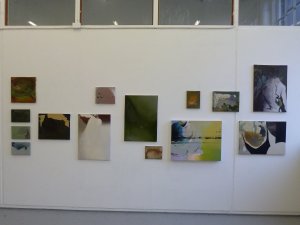 This evening, Conny and I visited the workshop of Carina Schüring somewhere outside of Enschede. Despite some weather radar indicated that it might rain, we decided to go there by bike. We did not encounter any rain during our trip and also saw some sun. On the way back we made a small detour through the village Usselo.

Carina had beautifully arranged all her works of the past years on the wall of her workshop as kind of private exhibition for us. She had made us tea and served it with some biscuits. The window was open and you could hear the birds chirping. For her, it was also a long time ago that she had seen all her works together. We just enjoyed looking at her works in the calm atmosphere of her workshop and talking about various subjects. A very special evening for all three of use, as I understood. (On the top right a picture of a part of the wall.)

She already had thought about how much she wanted to ask for the work that impressed me so much during the 'AKI finals 2015' exhibition. For her the price is not so much determined by the dimensions of the work but the emotional value it has. The price was above what I initially had in mind, but now that I have met her and know what value she attached to it, I realize that it is a good price. I am seriously taking it into consideration.

Havannah and Hex are both connection games, but slightly different because the first is a racing game and the other is not. Lets restrict the connection games to those games where players take turns in marking one position with their colour (in real play this is often done by placing a stone with thier colour on a location on the board) and where there is a collection of winning patterns that when marked by the same colour result in a win for the player who first marks the locations defined by the pattern. Futhermore, there are no restrictions on which locations can be marked at any point in the game. This to exclude games like Connect Four. The connection games can be divided into games where the winning patterns are the same both for both players or where they are complementary, in which case they are often symmetric in the sense that on the basis of some transformation rule there is a one-to-one mapping between the winning patterns for both colours. Usually there is a simple rule that describes all the winning patterns. (Because usually the first player has a significant advantage over the second player, often the pie rule is introduced, which allows the second player to switch colours after the first move, thus preventing the first player to make a move that would asure victory.) For all connection games it is theoretically possible to determine the optimal strategy leading either to a win or to a draw.

Another important property of connection games is whether they are drawless. This is the case when it is not possible to mark all locations with either colour such that there is no winning pattern for either player. Hex is drawless and for Havannah not, although the number of markings without winning patterns is very small.

It is not the case that all non racing connection games are also drawless. One could think of a variant of Hex where a simple straight connection between two sides is not a winning pattern. Probably this variant is not very interesting because it is relatively easy to prevent the other player from winning. Games with a low number of draw positions are generally considered more interesting. I do not know whether it must be the case that all connection games with draws must also be racing games.

I guess, I will start working on a formalisation of connection games, like I did for Havannah.

At 13:10, I bought the book Omgaan met kunst en natuur: Jo en Marlies Eyck in Wijlre with text by Henk van Os and photographs by Kim Zwarts from charity shop Het Goed for € 1.00 (including a € 0.05 tip). It contains pictures from to works by Peter Struycken. Op page 22 there is a picture of Komputerstrukturen 2 under the title Computerstructuur zwart wit 4-69. This is the only published picture of this work that I know of. There is a picture from the Struycken Structuur<->Elementen exhibition on which this work is also visible. On pages 41 and 42 there are pictures of Piet 5 under the title Piet v.

Today, Peter Struycken and I visited the Netherlands Institute for Art History, also known as RKD in Dutch. On forehand, we had made some requests about the materials we wanted to see, but soon it became clear that our small selection was far too large to be studied in one day. We started to work on the notes that Carel Blotkamp compiled for a catalogue of works, which, as it seems, was used for the 1974 exhibition. For this he send forms to all people owning works of Peter Struycken. Many of the works were know to me, but we also found some works that I had never seen before. Our greatest find was a panorama picture of P. Struycken - Structuur '67 exhibition on the back of which Peter had written all the Roman numbers of the works. This might resolve some of the riddles with respect to the Structuur '76 works. Peter also told me about the research he is doing with respect to the use of colours starting from the early Greeks in 500 BC. 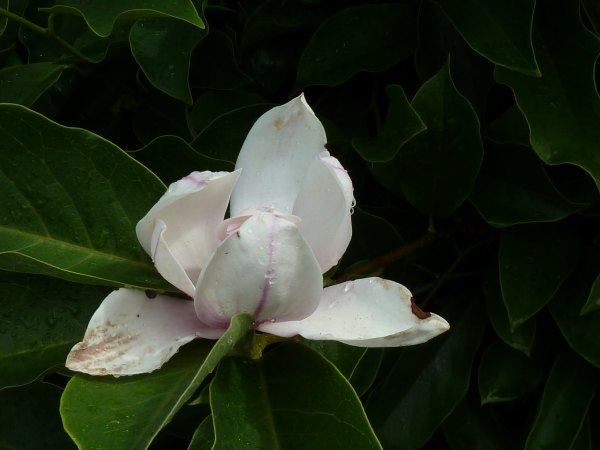 I noticed some flowers in our magnolia. Many of them are in new branches. Here a picture of one of the flowers.

On July 18, I wrote about the complexity of Havannah versus Hex and said I would be working on a formalization of connection games. I made it a little broader, and wrote something on the formalization of abstract strategy games, which is actually a rewrite of a formalization of Havannah that I wrote some years ago. Yesterday, I found Havannah and TwixT are PSPACE-complete. It was already known that Hex is PSPACE-complete. According to the Wikipedia page about game complexity, Havannah (size 10) has a higher complexity than Hex (size 11). The numbers for Hex are from the article Games solved: Now and in the future by H.Jaap van den Herik, Jos W.H.M. Uiterwijk, and Jack van Rijswijck, which quotes the master thesis Computer Hex: Are bees better than fruitflies? by Jack van Rijswijck as it source. But after a quick scan through the thesis, I did not find those numbers. Possibly they are taken from one of the referenced articles. That Havannah (size 10) has a higher complexity than Hex (size 11) could be the result of the fact that the first more than double the positions.