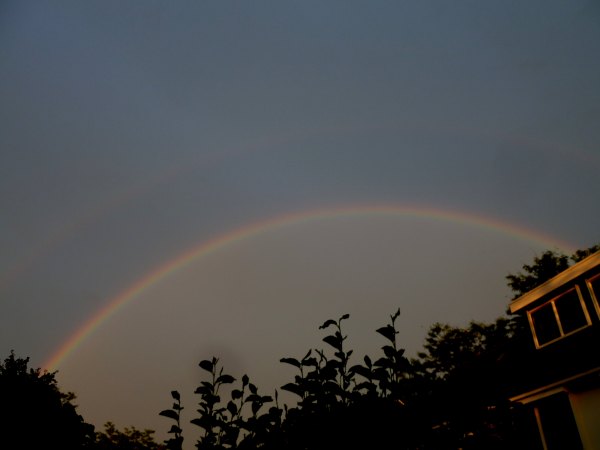 At about 20:40, I noticed a rainbow when I looked outside on the street side of the house. I went outside to have a beter look, to see if I could make a photograph. I took my camera and went into the back garden. It was indeed a bright, double, round rainbow. I took several pictures, of which one is shown here on the right. I went out several times to see how long it lasted. It seemed to fade a little, but then around 21 it brighted up again. There was almost no rain, and at that time the sun was lighting up the clouds to the west and above from the underside. It also seemed as if the rainbow was in the clouds. Then again it began to fade and finally disappeared at the moment of the sunset at 20:09. (I noticed that it was getting darker earlier. Around this time of the year the sunset happens about two minutes earlier every day.) The picture also shows of the branches that are growing straight up from our magnolia. There are still some flowers in it. I have to prune it one of these days.

Today, I met with Ton, and I bought a Havannah board from him. We did not play Havannah (he is much stronger than me), but we played a game of Wings, a variant he invented. He also showed me Tetra-Hex (not sure about spelling) which is a connect all your stones variant of Hex which is played on a tetrahedron and where both players start with two stones on two of the four corners. If you can surround a stone of your opponent, you win the game, because your opponent will never be able to connect all her stones. He explained that connection games are only interesting if they have moves that are balanced with respect to the pie rule. We also compared the Hex database with the results presented on Computer Hex. We talked about the difference in complexity between the racing connection games and the non-racing games. I pointed out a remark that I found in MoHex 2.0: a pattern-based MCTS Hex player by S. Huang, B. Arneson, R. Hayward, M. Mueller, and J. Pawlewicz, where it says: By contrast, Timo Ewalds (private communication) found no improvement from using probabilistic simulations in the Havannah program Castro, possibly because any such improvement is overwhelmed by dynamic factors such as the sudden-death threat from rings. This seems to indicate that the complexity of Havannah, a racing game, is greater than Hex, a non-racing game where always one of the players wins. But I said that it might be difficult to prove that this complexity can be contributed to the racing property or has to do with the sudden-death of rings. It might be that Havannah is a more interesting game with respect to the properties described in Defining the Abstract. The master thesis Playing and Solving Havannah by Timo Ewalds contains an table about the state complexity of Havannah and Hex (among others). In order of complexity the table contains the following entries:

It appears that the size of the state space is strongly related to the number of cells, and thus also with the complexity of the game. Ewalds also writes: By comparison with the games that have previously been solved, size 3 Havannah should be trivial to solve, size 4 should be hard but possible with brute force, and size 5 may be possible but only if strong mathematical properties can be found to dramatically reduce the search space as is done in Hex. It seems that Havannah is slightly more difficult to solve, but that does not necessarily make it harder to play. 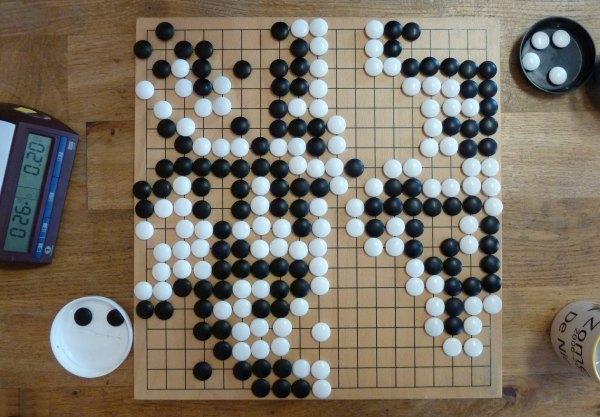 I attended Zomergo, a rather relaxed Go retreat, for one day together with a colleague. In the morning, I played one game of go with Elske. It was an interesting game. I won with just one and half point (including the 6½ komi). The final state of the board is shown on the right. Some stronger players made some remakrs about some moves that could have made the difference larger for me. In the afternoon, I helped with preparing the dinner. I also went outside and had a short look at the workshop and a real life game of RoboRally where water pistols were used for the shooting. I stir fried the mie for the dinner, which included various ingredients from the common wood pigeon: breast, wings, legs, heart and lung. For desert we had Eton mess with home made meringue and strawberries marinated in rum. Simply delicious.

At 10:30, I bought the following three books from charity shop Het Goed: I also saw the book The Phenemenon of scale: The art of nanotechnolology. On page 39, it has some interesting patterns with dots connected with lines from the PARR project by WLFR, a cooperation between Taconis Stolk and Sietske Sips. 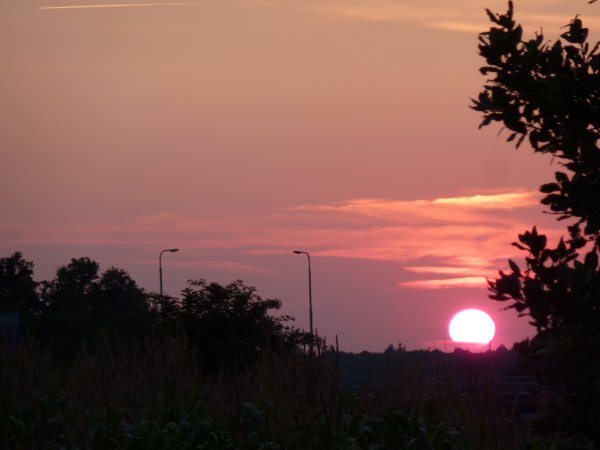 This afternoon, we visited TETEM art space. But before we arrived there, we biked along Studio Dertien and noticed that there was exhibition of Cheng Liang and Han Xi. We went in to have a look. In Tetem, we first watch a documentary about Safecast, which is about measuring radiation levels in Japan. Secondly, we looked at Alpha town and citizen sensing by Frededik de Wilde. Next we watched the exhibition of the descendants of Gerrit Jan van Heek (1837-1915). We especially liked one of the pictures of Sophia Bijkerk. After Tetem, we biked to Concordia where we looked at the Cargo exhibtion with works from Wessel Vreeken, Erik Luchtenberg, and Mark Bakema. In the evening, we walked to the Helweg to see the sunset and took some pictures, one of which is shown on the right.

On 11:31, I bought the book The Phenemenon of scale: The art of nanotechnolology from charity shop Het Goed, which I had seen last Friday, for € 1.00, including tip of 5 Euro cent.

On page 39 of The Phenemenon of scale: The art of nanotechnolology it says about PARR by WLFR: Begun in 1999, PARR is a research project regarding 'nano-aesthetics': the creation of a form on the smallest possible scale. For this project, a tiny imaginary universe of two dimensions was created, with only three 'natural laws': There is a five by four grid of positions, to give a possible twenty positions in total. Between two neighbouring points (horizontally, vertically or diagonally) a connection may, or may not, exist. It also displays nine PARR with seven points and nine connections. In all nine all points are connected through connections and there appear no (diagonal) crossing connections. Are these extra requirements, not stated here explicitly?

I wondered how these are generated and thought about a JavaScript program to produce them. There are different strategies that can be used. First of all one could randomly generate place nine points, connect all the connections between them, see if there are eleven or more. In case there are eleven, remove some at random. Of course, this would lead to many disconnected drawings. One could use a random walk to generate the points, where locations already visited do not change. Either one could draw the connections of the walk and stop when there would be accidently more than eleven, and in case there are less when nine points are placed, see if some additional connections can be added to add up to eleven. This procedure could fail. Another method would be to generate random points, but take care that they have a neighbour in common with one of the already placed points and draw a connecting connection with this point. And after all points are placed add some additional connections

I wondered how many different PARR's there exist. I wrote the program PARR.cpp for counting them. This program generates the PARR page. I first decided to count the number of PARR's in which each pair of points that are neighbours, have a connection, and allowing crossing diagonals. The total of this is equal to 220. From this I calculated the number of PARR's with possible missing connections. This resulted in a total of 84,024,935,266,353,181 different PARR's. Next, I counted all PARR's where crossing diagonal connections are not allowed. I did this again in two steps. This resulted in a total of 4,147,603,839,035,069, which is a lot less, but still a huge number. Note that these include many PARR's that are not fully connected, meaning that it is not possible to find a path of connection connecting each pair of points. Of course, the numbers of PARR's calculated here contain many similar PARR's with respect to rotation, mirroring, and translation. This property could be used to reduce the number of cases that have to be studied. But that still would leave a large number of solutions. I guess that it is only possible to calculate the number of a relatively low number of points.