(On September 16, I discovered that numbers marked with red, are incorrect.)

I went to Amsterdam with a friend. We visited the Stedelijk Museum Amsterdam. We first looked at some from before 1960, including: Next we watched the videos by Tromarama, a group of three artist from Indonesia. Then we looked at the design exhibition in the reverse order. There we saw: Next we walked through the second floor of the museum, where we saw, among many others for which I cannot find the titles: In one of the rooms we also encountered: A year at the stedelijk: Tino Sehgal. Finally, we went downstairs to visit the exhibition: ZERO: Let us explore the stars about the ZERO movement. This contains works by Jan Schoonhoven. My friend bought the catalogue for me. We saw the Condensation Cube by Hans Haacke. I took a picture of Sphèr-Trames by François Morellet showing a hexagon shape. I also took a picture of Lichtrooster in de ruimte (light grid in space) by Heinz Mack, which for some magical reason reflected images rotated by about 90 degrees.

In the evening, I visited The Gogbot festival with a good friend. We first went to look at the exhibition at Concordia. We found NOVA EDEN by Rob van der Burg the most interesting. Next we looked inside the 'Oude Kerk' and the sqaure around it. We found PHOTOTROPE by Pauline van Dongen most interesting. We did also have a quick look in the TkkrLab dome, where it was rather quiet. This year year lacked any very exciting instalations. Maybe this is due to the theme: "The Internet of Things" with its focus on small, often hidden, devices.

I found a newspaper article Tussen kunst en wetenschap: Taco Stolk en de schoonheid van wiskunde on page 15 of the Leidsch Dagblad of December 5, 2001. The text is not completely visible, but I guess that PARR stands for Particle Aesthetics Relation Research. With the article there is also a picture of Taco Stolk sitting in front of laptop showing (with white on a black background) a PARR configuration on seven points and nine connections with two crossing diagonal connections. I conclude from this, that crossing diagonals are allowed in PARR configurations.

Below, a drawing of all unique PARR configurations on a two by two grid, not taking into account rotating and mirroring. I have placed them in rows and columns depending on the number of horizontal and vertical connections (rows) and the number of diagonal connections (columns). There are 31 of them: 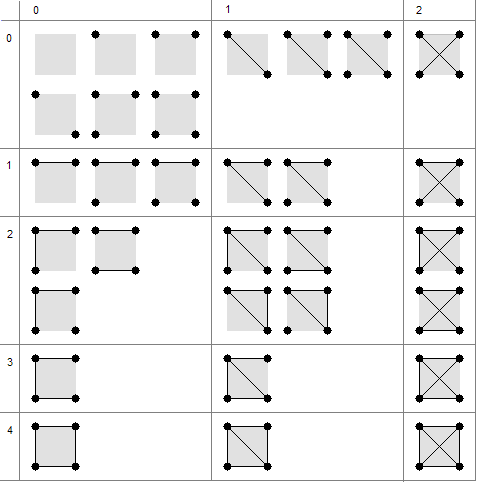 Consciousness and the Brain

This morning, I finished reading Consciousness and the Brain by Stanislas Dehaene, which I started reading on August 15. Two months before, I bought it in Antwerp. The book is based on scientific research in the past thirty years, which is reflected in list of references covering 32 pages. Yet, the book is very readable and I enjoyed reading it. There were only a few sections where I felt that the author was kind of repeating the same statement in a different manner, probably with the aim to clarify his central ideas. The book indeed exposes some very interesting discoveries with respect to consciousness, but I doubt if those (now or in the future) address the mystery with of subjective experience. I also think that his ideas about how consciousness could (in the future) be achieve with computers, rather simplistic, probably due to a lack of understandig of how computers work.

You should be here!

I finished reading the book You should be here! A book about Helsinki by Tom Bulgaria, which I started reading on August 30 after I bought if on August 21. I enjoyed reading this alternative tourist guide to Helsinki. It made me want to stay there for some months and visit all the places mentioned in the book. I stayed in Helsinki in May 1996.

While working on the counting algorithm for unique PARR configurations, I discovered an error in the previously published results. The current version of the program finds the results shown below in the table. The bold number is the number of connected configuration in which not all neighbour points have a connection and in which crossing diagonals are allowed.

When I biked home, I noticed, while biking on the Lonnekerbrugstraat, that the sun behind a cloud just above the horizon was causing rays of light from above and under the cloud. At the same time it started to rain a little, and when I searched for a rainbow, I found a partial (around 19:19). It quickly grew into an almost complete, rather faint single rainbow. I waited for the sun to appear behind the cloud, hoping it would result in a bright rainbow against al already rather dark background, but that never happened. When around 19:23, I arrive at the end of the Lonnekerbrugstraat my view was obstructed by some trees, and when I could see the sky again, the rainbow was gone, and so where the rays because the sun had disappeared behing some thick clouds. Later, I realized that this rainbow was not caused by direct sunlight, which made it noteworthy.

This evening, Carina Schüring visited us. She brought the painting, which she recently named 'Blao', with her. It is the painting that I had decided to buy after we visited her on Wednesday, July 15. After we had dinner, I read through the purchase contract, stated in German, as she is a German citizen, signed it, and transfered a sum of money to her account, thus making me the owner of the work. The contract contained a clause, giving her the right to put the work on display, whenever she has an exhibition, for which it is suitable. I am very happy to borrow it to her for that purpose.

I uploaded a new version of the webiste about Peter Struycken. This version has both static and dynamic parts. The dynamic part is based on the JavaScript code, I already had. The static part is generated with Node.js using the same data but with some additional files. Becaues it seems that Node.js does not support a include mechanism, I wrote a batch file, which just copies some files together. Because the website has both an English and a Dutch part, and I basically need to run the same generation for two languages, I came up with the idea to just include the generation part twice. To reduce space, I already developed a small program to strip JavaScript from useless information (spaces and comments) and remove all data from 'src' fields in records. This is how the batch file looks

The image shown with the 'PARR' bar on WLFR shows the PARR 7|11 Reference Guide about PARR configurations with seven points and eleven connections. The calculation show that there are a total of 802 connected PARR 7|11 configurations. The program PARRan_7_11.cpp when given the PARR_con_o_9.data file as input produces the list of all solution (as ASCII art): PARR_7_11.txt. 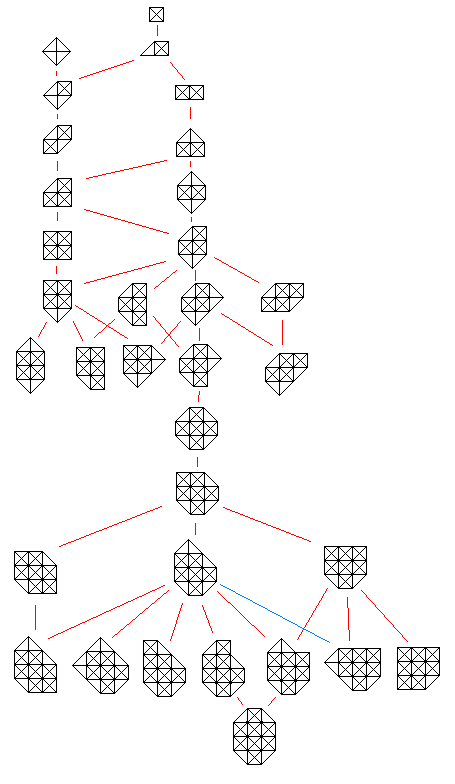