On March 14, I presented a pretty looking function for checking whether a string is encoded with UTF-8. Yesterday, I realized that there is an error in the algorithm when a UTF-8 sequences consisting of multiple bytes is terminated prematurely. This morning, I wrote a program to check an improved version of the function. This looks less beautiful, but that is partly also because of improved checking. This function only checks UTF-8 characters up to four bytes (as is defined by the current standard). The added check (marked with slightly text colour) is that characters represented by multiple bytes actually fall in the range for which that number of bytes is intended. Theoretical it is possible to represesnt every possible value with in the range of valid Unicde code points with a sequence of four bytes.

Today, Andy and I joined the yearly Truck Run organized by De Tukker Truckers, just like we did two years ago. The GPS-track of how we drove in KML file for Google Earth or in Google Maps.

When calculating the number of tilings within rectangles of various sizes, I discovered some serious omissions in the set of initial tiles, invalidating all previous results, like those presented on May 20. The set of possible tiles is extended to:

The impossible (partial) diagonal sequences are:

However, when calculating the number of (complete) diagonal sequences, it shows that some diagonal sequences have no continuation, in the sense that there is no two longer sequence that is based on it. The smallest such example is the sequence "DAAHIFAAB". Note that this sequence is one of the impossible (partial) diagonal sequences mentioned May 20. There is only one way the top left part can be filled, namely with a three by three in the top corner and two one by two tiles with the longest side touching the left and top sides. When placed in a rectangle, this sequences has 62 different solutions in the right bottom part. However for the next (partial) diagonal sequence there are only eight different ways it is filled for these 62 solutions. When these sequences are extended with an 'A' on both sides, always the first three and/or the last three have no tile available, thus making them impossible for a (complete) diagonal sequence. Longer sequences that start or end with the "DAAHIFAAB" if (and maybe: and only if) they are followed or preceded with the sequence "DEB", which forces an 'A' for the next diagonal.

Below the updated table for the number of sequences per diagonal length.

The latest version of the program also calculates the number of unique (with respect to rotations and mirroring) tilings inside rectangles of various sizes. The algorithm first calculates possible combinations of two rows for a given width, and next uses a recursive algorithm to find the number of patterns for a given height. This could be improved with a matrix transfer method and it is also possible to derive recurrence equations for each row (and column) for this table. Although the table is symmetric along the main diagonal, the numbers above and under the diagonal have been calculated independently to verify the correctness of the algorithm. (The output of the program also contains a table with all tilings.)

Below the 166 unique street tiling patterns that fit in an eight by eight square.

At 9:25, I bought the map 7000 Eichen - Standorte: Ausschnitt der Karte der Stadt Kassel (estimated scale 1:20,000) at chariry shop Het Goed for € 0.50. I found this map without price between the art books and someone working at the shop, suggested that it might have fallen out of some book. I made some remark about how a map about oak trees in a city could be related to art. He than gave it a price. But at home, I discovered that the map was about an art project called 7000 Eichen – Stadtverwaldung statt Stadtverwaltung by the artis Joseph Beuys which he made around 1982 as part of Documenta 7 in Kasselt. I will see if check if I can find a book about this at the shop and buy it as well.

I recieved the book AKI 1999 EINDEXAMENS edited by Maarten Binnenhuis, Sipke Huisman, and Regina Kroeders written in Dutch and English published by AKI academie voor beeldende kunst en vormgeving in 1999, for which I paid € 8.90.

In the afternoon, I went to het Volkspark (literally, the people's park) in Enschede to attend an open art exhibition. I came along the tent of the art gallery Beeld en Aambeeld and found that they had some works by Billy Foley on display. At half past two, I listened to a one hour performance of Netherlands Symphony Orchestra. I met with several new and (very) old acquaintances. I also listened to Twents Jeugd Symfonie Orkest when they started playing "Millenium" by Richard Meyer, which to me has some similarities with music from Star Wars and The Lord of the Rings. Could have been written for a movie. (See for example a performance by SC All-State Junior Orchestra 2011.) The GPS-track of how I walked in KML file for Google Earth or in Google Maps

In the past weeks the Street Tiling Patterns program crunched on to find more and more solutions. For size 36 it found a total of 1735 unique patterns. Below, I have given the 74 patterns of size 36 that use the same ratio of kinds of tiles as found in the Versaille pattern, many of which are not laid out in a six by six square pattern as the Versaille pattern.

Around 11, I arrived in Amsterdam and went to bookshop Scheltema. I bought the audiobook (consisting of 10 audio CD's Extremely Loud & Incredibly Close, ISBN:9781464009136, for € 8.90 and the catalog of exihibtion Invisible Poem, ART LABOR Gallery, Shanghai, China with works by Lu Xinjian for € 8.00.

Around 1 in the afternoon, I arrived at the Rijksmuseum where I met with Meindert. I first wanted to go to Room 3.4. Before getting there we saw three paintings by Karel Appel and a video of Imponderabilia by Marina Abramović and Ulay. In Room 3.4, I first went to look at the works: 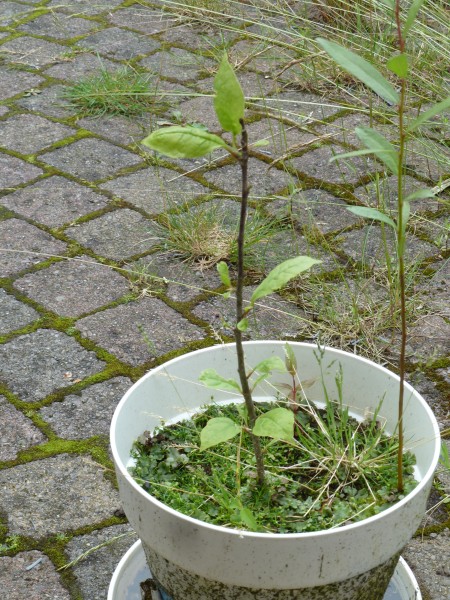 our small magnolia tree has survived the frost period from early May. It is now about 25 cm tall. It seems that the budds at the top have died, preventing the tree to grow higher. But I notived something near one of the leaves that could grow into a new branch.

I just searched for the track about the digits pages in Extremely Loud & Incredibly Close on the audio book, I bought last Wednesday. It starts on track 14 of disk 8. I was a little disappointed to discover that they skipped the whole pages of digits after the first 8 on the first full line of digits on page 269. It thought that unabridged meant: "Containing the original content; not condensed". Leaving out almost two and half pages of text (arguably very boring text, that no one would have actually read) does not feel like: original content. Also the condensed text starting from "I've seen him" on page 281, which is still readable for the first lines, has been left out at the end of track 6 of disk 9.

In the afternoon, I went to the AKI finals 2016 exhibition. I first visited Dynamo Expo. Next, I went to TETEM art space. Finally, I visited the main AKI ArtEZ building. At 18:01, I bought the book analoog | analogue | analog edited by Johan Visser written in Dutch, English, and German published by AKI ArtEZ on Friday, June 24, 2016, ISBN:9789075522372, from AKI ArtEZ for € 15.00. I found the following artist interesting:

The tweet Will each jellyfish in this GIF eventually end up where it started? with a GIF by Frédéric Vayssouze-Faure encouraged me to write a program to analyse this GIF. Of course, as there are only a finite number of states, at some point all jellyfish will be at their starting location. But how many swim movements will it take. I used GIF maker to retrieve the movements. I already had noticed that there were three types of swim movements that were repeated over and over again. I encoded these in the program with the characters '>', '<', '^', 'v', and '|'. The latter I used to replace '^' and 'v' when I realized that it is always possible to derive which one should be used. The program quickly found that after 6192 swim movements all jellyfish have returned at their original location. Vayssouze-Faure placed the remark: "If I had the time I would check if one of them can reach the bottom from the top…" After 23 swim movements the first jellyfish from the fifth column arrives at the top left corner. After 197 swim movements there are six jellyfish from the bottom at the top row. This is the configuration using hexadecimal digits from the row and the column:

If we look at where the jellyfish each time the three swim movements have been performed, it turns out that there are eleven different sequences, which when marked with the letter 'a' to 'k', results in the following table: