In the past week, I made some improvements with respect to the program that I wrote to generate Steet Tiling patterns. The latest version of the program can find all solutions up to an area of thirty in less than a day. I tried to add some more checks in the recursive back-tracking function, but it seemed that I hit some wall and that many simply made it slower. With each additional test to avoid parts of the search tree that are not going to find results, you also add some time to the execution of the function, adding a constant time to the total execution time. If a certain test is only effective in a rather small number of cases, this can lead to an increase in the total execution time. I thought about the idea to use Wang tiles for the most restrictive case. I tried several coding methods. I came up with the idea to use the letters A to I to mark the unit squares of the tiles in the following manner:

If you look at all the ways these can be layed on a square grid, than the following 86 patterns can occur on the squares made up of two by two unit squares:

These are not exactly Wang tiles, because Wang tiles are labled on their edges, not their corners. But there are 28 different combinations of letters that occur on the edges, thus we could create an equivalent of 86 Wang tiles with 28 different 'colours' for the edges. This is a rather large number, and I thus thought about a way to create Wang tiles with less 'colours'. If one makes Wang tiles around the points where four unit squares meet, and use letters to indicate properties about the edges, I came up with the following set of 76 Wang tiles using nine 'colours' (0 and the letters 'a' to 'h'), where the order in which the 'colours' are give are top, left, right, and bottom side. Note that for every wxyz there is also a xwzy.

I did search for algorithms or programs for analyzing Wang tiles, but I failed to find any. Last week, I came across a copy of the book Shadows of the Mind in which there is some reference to tiling the plane with copies from a set of polyominos.

Less than two weeks ago, the temperatures were very low for the time of the year. On April 26 the temperature reached below zero degrees Celsius and was at most nine degrees. On that day and two day before we even had some wet snow. Yesterday and today we had totally cloudless days and today the temperatures went up to 24 degrees. It seems that our small magnolia tree is not doing well as it seems that the new leaves has been damanged by the frost in the past weeks. 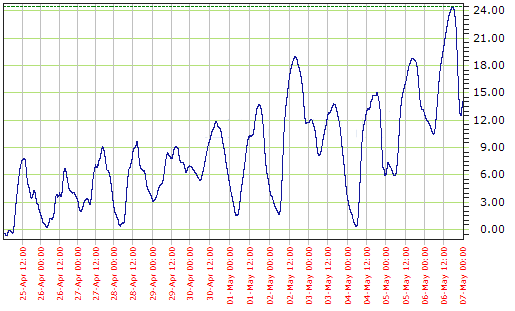 At 11:47, I bought the following two books from charity shop Het Goed:

In the past week, I continued working on the program for Steet Tiling patterns with Wang tiles that I started developing on May first. This program first of all reduces the set of Wang tiles to those that can occur in combination with other tiles. This results in the following set:

I visited Rijksmuseum Twenthe. First I looked at the exhibition De Nieuwe Smaak (The New Taste). I liked the following works:

Next I saw the Thomas Gainsborough exhibition. I was not very impressed. The work I liked most is The daughters of the artist from around 1758.

Next, while on my way to TETEM art space, I decided to visit Kunstenlandschap (Art and landscape). At Tetem, I saw the following works I liked:

The GPS-track of how I biked and walked in KML file for Google Earth or in Google Maps. Along the route I liked some works by: Nanon Muskee, Henk Slomp, Mark van Loon, and Imke Beek.

Continuing from my research on Street Tiling Patterns, I discovered that previous presented results are incorrect. I changed the program to calculate the number of diagonal sequences starting from the sequences with length three. To my surprise, I stopped very soon. While debugging, I noticed that there was a tile with two B's on the right, while there is non with two B's on the left, meaning that the elimination algorithm for removing tiles that can never occur, was incorrect. When I corrected the error, two more tiles were removed resulting in the set:

May 30: These results are incorrect! Follow-up

The past month, I have become a regular visitor of TkkrLab, a local hackerspace. Today, there was an opportunity to build The Things Network node consisting of a RN2483 Low-Power Wide-Area Network chop and a Chinese Arduino Nano clone. One of the organizers soldering the RN2483 chip to the PCB for me. I did the soldering for connecting the Arduino Nano to the PCB. One of the organizers also helped me testing the unit and it seemed to work using the TTNMapper Andriod App. I did not have a laptop available, so I could not create a user account for myself. In the evening, at home, I got the node to work after having some trouble with getting ttnctl to run (got an x509 error on Windows XP), connecting to the Chinese Arduino Nano clone (required driver for CH340 serial USB chip), and getting Arduino IDE to compile ttnmapperarduino (had to move library files to the proper location). It also looks like the signal is only picked up by the gateway in the center of the city when I put the node outside in the backgarden. I saw four 'ping' messages come through as a proof that everything works. Now I have to find some interesting application for it, and also find out how I can process the messages using MQTT.

I finished reading the Dutch translation of the book The Ego Tunnel by Thomas Metzinger, which I started reading on April 25, the day I recieved it after I bought it secondhand on-line. Metzinger is a philosopher who work together with neuro-scientists and he is not afraid to talk about subjects that are controversional in science: Out-of-body experiences and lucide dreaming, both of which he has experienced them firsthand. Yet he is able to intergrate them with scientific findings. He explains that the experience of self is so strong because conscious states are transparent. We We do not see the model that our brain creates from the brain, but we directly experience the model. We cannot see the construction process (in our unconsiousness) because it is too fast and too robust. He makes a good case to this. I felt the last chapter a little weak, because it asumes that people have a free will, which seems not the case. Also I believe that most people are not able to grap and/or accept the reality that he is describing because too difficult to accept. And for this reason, I do not believe that we will go through the transformation that he is describing. To me, it seems that people are moving away from science more and more. The scientific reality is only understood and accepted by a small portion of society, because often it is counter-intuitive, especially with respect to consciousness and selfness.

Andy and I went to the Twelfth Dutch Kabuki family day held at Ronald McDonald Kindervallei in Valkenburg aan de Geul. Initially, I intended to go alone, but last Sunday, I told Andy that I was going, and when I casually asked him if he would like to go, he was very assertive that he wanted to go. When I asked him when was the last time we went there, he immediately said 2013, which is correct. So, I arranged that he could come as well. He behaved quite nice and enjoyed the the program they had for the children. There were many new families present, some with you children (who were not yet born on the last day) and some older children. Even one teenage boy, who just recently got a positive diagnoses. The highlight of the day, was the movie clip of the week of a 18 year old girl with Kabuki Syndrome. She is good at calculating the day of the week. She calculated the day of the week for my birthday this year correctly. I took the opportunity to talk with many of the new families.

But there was also some news on the scientific front. The group at the Academic Hospital Maastricht has now been recognized as an expert center for Kabuki Syndrome here in the Netherlands and there is a process of them also becoming partner of an European group of expert centers for the syndrome. Copies of the paper Body proportions in children with Kabuki syndrome were handed out. If I remember correcly, pictures of Andy were taken in 2013, and I assume that he is one of the 11 children with Kabuki Syndrome included in the study.

The most interesting news were the results from the growth hormone study. The results of the study are very positive. They found a one standard deviation improvement in the length and also the other body parameters (methabolic rate and non-fat tissue) improved. They are now going to request growth hormone therapy to be available for children with Kabuki Syndrome here in the Netherlands as only half a standard deviation improvement is sufficient. They did find that the normal test for the various growth hormone factors gave very conflicting results, not in accordance to normal measurements, but that non the less, all children in the study (even those that otherwise would not have been qualified for growth hormone therapy based on the factors) reacted positively to the therapy. Before it was reported that growth hormone therapy seems to have a positive effect on muscle tone, concentration, and intellectual abilities. In some cases it also seems to stabilize blood sugar levels. But this was not studied in this study and thus also not affirmed.

The GPS-track of how we drove in KML file for Google Earth or in Google Maps. 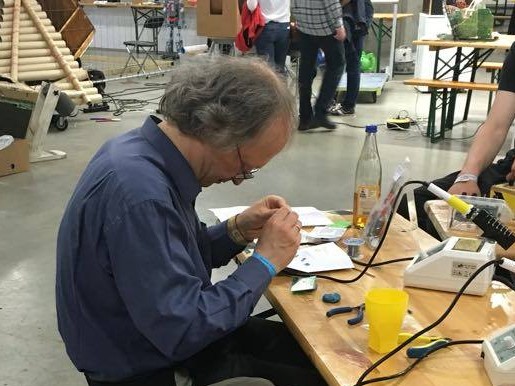 This afternoon, Annabel and I went to the Maker Festival Twente. This year it was focused more on children than last year. At the stand of FabLab Enschede we met some classmates of Annabel. They we making wooden bracelet with a laser cutter. I also had one made with my name on it. Annabel has also looked at 3D printers. At the stand of LayaLay we found a small plug-and-play 3D printer of € 700 and at the stand of Make Block Shop we found a waterproof and somewhat flexible cup that was made by a 3D printer in approximately 51 minutes, which costs € 649.55. Annabel was impressed with the quality. Of course, we also spend some time at the stand of TkkrLab. Finally, I build a Noise! synthesizer at the stand of Reverse Landfill. This gave me some more experience with soldering. Some example sounds can be found on sound cloud.

Today, I became a member of TkkrLab after having visited their open evenings in the past weeks. This evening, I installed Arch Linux with OpenRC from archlinux-openrc-2016.06.01-dual.iso (put on USB stick) on FJF2, Acer Aspire One notebook. Read installation log for the details. This months interesting links
Home | April 2016 | June 2016 | Random memories