In the afternoon, I visited TETEM art space, to look at the programming workshop organized as part of the 'Weekend of Science' being held. I saw groups of children with their parents program in Scratch. I decided to look at the new exhibitions first. In the movie room they were showing 8 Eeriest Sounds Recorded In Space by geobeats, a movie about sounds in space produced by electromagnetic phenomena. Next I went to see Observatories of the Self by Sara Nuytemans. Quite interesting. I did go inside Self 2.1 and I recorded soms movie for Self 1.4. After visiting the now completely renovated bookshop Broekhuis, I picked up six medium sized chestnuts from the many that were under the tree on the Haaksbergerstraat.

At TkkrLab there is a junk cabinet that is filled with leftover junk. When the cabinet is full (about once per month) the contents is sold as metal scrap. In the past week some members have done some cleaning causing the cabinet to be rather full. I had a look and collected two small stepper motors and an Iiyama ProLite E438S-B LCD monitor. The later, I took home, as it fitted in my bike bag. There was also a scanner printer, which looked similar to our Canon MP 520 all-in-one printer. It would not surprise me if it had the same problems as ours. I put the stepper motors in my private Ikea box at TkkrLab, in which I also found earlier on the evening the Philips monitor that I usually connect to my notebook. It seems someone has decided it is now mine. I also found some PCI card being put in my box. I asked around and was told that it was a SCSI card, and that they put it there because I had brought a SCSI hard drive and thought I might put it to some use. This shows that things only get into the junk cabinet when noone can think of some use for it.

This evening, I finished reading the book American Nerd by Benjamin Nugent, which I started reading on September 30, the day after I bought it. I finished this book in a relatively short time. Although, I found it interesting to read, as it made me understand certain aspects of the American culture, but in some points also disappointing. For example, it seems to me that the exposition of autism, was not very realistic, especially not for people with normal intelligence. The book did also make me realize that I do not fit in with the nerd types described in the book, although I have identified with the nerd type before.

I went to Amsterday. I first went to bookshop Scheltema. There, at 11:39, I bought a Moleskin daily planner for 2017 for € 18.90. I spend some time looking around and when I noticed that Jonathan Safran Foer was going to give a book signing session started at 13:00 for his new book Here I Am, I decided to wait. I contemplated whether I should tell him about my research with respect to the number sequences in Extremely Loud & Incredibly Close, but concluded that if he were truely interested in this, he might already have contacted me. There was a long line of people waiting for their book(s) to be signed.

I went over andriesse - eyck gallery where I met with Peter Struycken. At that moment, it was rather quiet. I only stayed a short time, and went to La Place to collect some lunch items that were include in the train ticket that I bought. After this I walked around. I paid short visits to Mendo and Boekie Woekie on my way to Ron Mandos to visit the exhibition The Monolith by Levi van Veluw. Impressive, especial the dark room, which give you the feeling to be in another world.

I walked around the area and brought short visits to two other galleries, before returning to andriesse - eyck. There I spend a long time looking at the new series of painting by Peter Struycken. I think that Articulatie van kleur 04-feb-2016 is my favourite. Also meet with Carel Blotkamp and later with Walter Lewin and his wife.

In TETEM art space, I went to see the exhibition as part of "Month of Graphics". Works I found worth mentioning are:

This afternoon, I saw the lastest work (installation) of Peter Vink in the main exhibition room of Concordia art exhibition center. In the past four weeks he worked on constructing the installation, which consist of strippes hanging on thin wires from the ceiling. The stripes have the size of the tiles used for the parquet of the floor and also follow the pattern of the parquet. There are in hanging in ten horizontal layers, filling the space that is restricted by the windows, windowsill, and back of the room. His art works, which are very different in style, are always made around the space in which he creates them. This work (installation) will be another four weeks on display in Enschede. It was interesting to talk to him. He also visited the exhibition of Levi van Veluw, which I saw two weeks ago.

Some time ago, I came across this video by Oscar van Deventer about Fractal Jigsaw puzzle. I spend some time investigating the design with the idea of creating one myself. In the past weeks, I spend some time writing a program to generate all possible puzzles. I have not fully completed this attempt. Today, I spend some time figuring out how to generate the fractal that is being used. I discovered that the design of the puzzle is based on the design on the left presented on Bridged Polyamonds. On this mathpuzzle page there is a link to the design of the Fractal Jigsaw puzzle with a matching colouring of the pieces. During the afternoon, I made the following drawing: 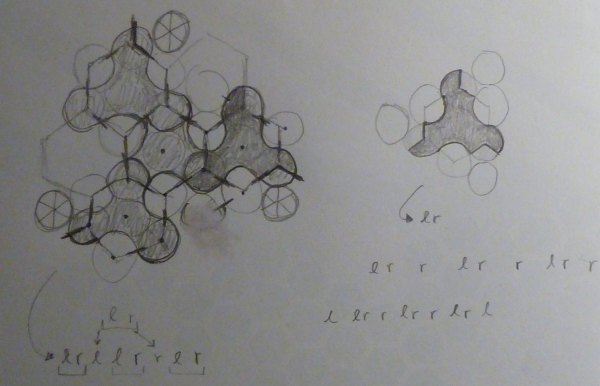