Yesterday, I came along the article Learning through ferroelectric domain dynamics in solid-state synapses, which descibes the design of an intergrate circuit device that behaves similar to a synapse of a nerve cell with respect to spike-timing-dependent plasticity (STDP). STDP means that synapses that were active shortly before the nerve cell generated a spike are strengthed, while synapses that are activated shortly after the spike are weakened. Long ago, I already had thought about a way to simulate a nerve cell, but did not know that the mechanism for strengthening and weakening of synapses is so simple. Although neural networks and deep learning are hot topics, the use of STDP based neural networks are relatively rare. Today, I found the article Spike-Based Image Processing: Can We Reproduce Biological Vision in Hardware?. I also found that Simon Thorpe worked on the use of this for image recognition based on STDP, which are now being made available through Spikenet technology.

Last week, I dropped my Chinese Wooden Puzzle on the ground and I had stacked all pieces on the table to make sure I got them all. The other day, I decided to quickly put them in again, so I started to fill the top three rows with the yellow and orange pieces. Next I filled the bottom two rows with the green and purple pieces and quite quickly found a solution to fill the middle part with the remaining pieces. This evening, I went on to count how many solutions there are for the middle part. The program found 46,172 solutions in 1,561 patterns, all of which (not very surprisingly) are not symmetric in any direction. The program reported that there were three (suboptimal) minimal touching patterns with 29 extra. I was a little surprised that the program also reported that there were 20 patterns that are a combination of smaller patterns, meaning that there was a vertical split in the pattern. I reasoned that this could only be made with the five black pieces on one side and the red, blue, and white pieces on the other side. So, I ran the progam again. Below the three minimal touching patterns are given followed by ten of the combined patters (the other ten are made with the black pieces on the left) and fifteen randomly selected solutions:

I have been away most of the day. I got up early and at eigth I was at the supermarket to buy my weekly groceries. On my way to Li-Xia, I went to Laura (from All Laura), to pick up the meditation pillow that I had ordered. After having visited Li-Xia, I went to the hairdresser to have my haircut. It has been over nine month ago that I had a haircut. Recently, I have noticed that my hair stays at a certain lenght, probably due to the hair failing out before they grow any longer.

Next I went to Concordia to see the exhibition How on earth should this be art? with Tinkebell as curator. I bumped into the mobile named "Pig Heaven, installation, 2017" by Sjef Meijman, which made the mobile move. I went to the second floor to look at the exhibition of the B93 art collective. They were still building up the exhibition for the opening later in the afternoon. I went to see the rest of the How on earth should this be art? exhibition. I view the pedigree of the chickens by Koen Vanmechelen. The final rooster of the breeding program with chickens from all over the world, looked impressive. I noticed that after twenty minutes the mobile was still moving very slightly. I was impressed by the work "Little Delft Street" by Rob Scholte. Over the years he has bought home made embroidery from secondhand shops and flee markets. At the exhibition it shows sixteen pictures of the back of such embroidery representing The Little Street painting by Johannes Vermeer. It is interesting to see all the different colours of wool that were selected by the unknown women who made them.

At bookshop Broekhuis, I looked around the newly second hand books and went to opening of the exhibition with works by Hermine Sanders. In the past years, she worked with templates that she cuts out herself. I was impressed by the very realistic looking human figures that she can make by cutting paper. She also had a large number of posters on sale for just € 25.00. I immediately decided to pick one and buy it.

At TETEM art space, I talked a long time with Tom, who I had met twice before. Not so strange that I met him again, because he is doing his internship for his vocational training photography study at TETEM. He told me that he has been experimenting with Max lately. Before I left, I had a second look at the Sandim Mendes: panu terra | terra panu exhibition. I had seen it two weeks ago, but today, I was much more impressed with it. I must not have been in the right move to view it two weeks ago. I had a look at the book Making Africa - A Continent of Contemporary Design, which I found quite impressive.

I went back to city center, where I brought a short visited to the art galery Beeld & Aambeeld and also met woman I know, who was working on a painting on two garage doors of a show. To me it looked almost done, but she still pointed out some details that she was not happy with. Look, that is the right attitude for an artist.

In the evening, I visited the demonstration of a home made singing tesla coil.

The grass is not green

When I say: the grass is not green, I do not mean that it is yellow due to drought. It is also not meant as a contradition to the statement that grass is equal to green, acknowledging the fact that grass is more than just being green. It means that grass does not have the property of being green. There is nothing green in grass, as grass is just made up of atoms. Yes, grass does have the property that under certain light conditions (those similar to produced by the sun as filtered by the earth atmosphere) it reflects a certain spectrum, which (in most people) excites certain cones in the human eye, producing a certain excitation of nerves in the eye, resulting them to fire in a certain pattern. The colour green, as we experience it, is an illusion created by our brain. Some people, with a type of red-green colour blindness, see red and green as the same colour. One could say that they are only able to see yellow-orange and blue, as opposed to normal people who can see green, red and blue. Probably, these people are not able to imagine the colours red and green, like we are not able to imagine a fourth colour. It is possible, that the colours we preceive are completely individual and that nobody 'sees' the world like we see it. Bellow a processed image of a picture where I have averaged the red and green channels, which gives an impression of how people with red-green colour blindness could see the world. (If this looks like a normal picture, try opening this page throught http://www.iwriteiam.nl/D1704.html#21.)

This morning, I finished reading the novel Less Than Zero by Bret Easton Ellis, which I started reading on March 5, the day after I bought it. I read the book in tandem with the Dutch translation Minder dan niks, which I bought on Saturday, August 4, 2012 and finished reading this morning. It was an interesting experience to read the books in tandem. I had hoped it would increase my knowledge of English, but I am not sure if it did. However, I did notice that I sometimes did not remember having read something in the other version, probably caused by the fact that my thoughts were wandering away at that moment, and thus not consciously reading the text. With respect to the contents of the book, I would advice not to read it, because it contains some rather shocking things. The book has a very autobiographical sense, probably due all the causual remarks that the author makes about events that took place, and which are hard to imagine, if you would not have experienced them yourself. I wanted to finish reading the book, hoping that it would contain some positive twist, which, I could have guessed from the title, was not the case. In the back of Dutch edition the first sections of Figuranten (the Dutch translation of Imperial Bedrooms), which I did read. Now that I have started reading the book, I am afraid that I am going to finish it as well, because I boought it together with Minder dan niks.

Our magnolia does not look very good. Many of the leaves have turned brown. Last week it was quite cold for the time of the year. The temperature drop below -4 degrees Celsius, at even below -9 degrees at ground level (10cm) on April 20. I am afraid that the leaves will not recover and that I will have to wait for new leaves to appear. I guess that the tree/plant will recover. It seems that the small magnolia plant has died after it leaves fell of during a similar cold period last year.

I finished reading the book Think Like an Artist: ... and Lead a More Creative, Productive Life by Will Gompertz. I started reading the book on April 5 after I bought it on April first. It was in interesting read, but not very revealing. Many of the things he described, I already recognized in my work as a software engineer, both professional as for leisure, because it is a highly creative job where you challenged to find solutions to often complex and/or new problems. I was a little disappointed about the fact that Gompertz mainly deals with figurative art and not much about modern art. He does mention some modern artists, but does not discus their works in detail. I am not sure if my life will be more creative and productive now. 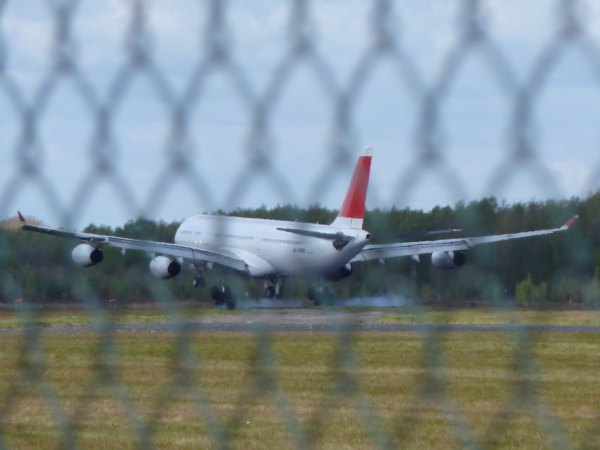 I biked to Enschede Airport Twente to see the arrival of HB-JMK, an Airbus A340-313X, on its last flight, Flight LX5180, in order to be taken apart here in Enschede. Arrived just in time. It was quite busy. I wanted to find a spot near the start of the runway, but when I realized that I was on the side of the runway, it was too late to change places. I started my notebook FJF2 and ran dump1090 to track the plane. The programs listed a lot of planes, more than I had ever seen, so I had to restart it several times to see the information about the flight I was interested in. Maybe I should have logged the datat to a file for further analyses. Above a picture of the moment the tires touched the airstrip for the first time. I also took some pictures of the approach (one of them). After the plane landed, I biked around the airstrip and took some pictures (one of them) while the plane was being taxied. Afterwards, I biked around, visiting Li-Xia at the nursing home. I made a KML file for Google Earth of the route that I biked (view in Google Maps). It also includes the last part (within the Netherlands) of the track of the plane.

This morning, I finished reading the book De Figuraten (the Dutch translation of Imperial Bedrooms) by Bret Easton Ellis, which I started reading last Saturday. (I bought the book on Saturday, August 4, 2012.) I cannot deny that I got drawn into the story, but it lacks the realistic and literary style of Less Than Zero. The story does not come to me as real in any way, and thus did not have the impact that the former book had. This months interesting links
Home | March 2017 | May 2017