This made me think about the question, what is the minimal intelligence (IQ) for intentional and attentively listening to an opera? Some classify operas as the most complex form of classical music. However, in the paper Why More Intelligent Individuals Like Classical Music by Satoshi Kanazawa and Kaja Perina it states: At the same time, preference for opera, another highly cognitively complex form of music, is not significantly correlated with intelligence.

I prefer to listen to the Boom Room while trying to understand the paper Minimal Phenomenal Experience by Thomas Metzinger. Or I listen to the presenation he gave about the subject, while cleaning up my email inbox and, later, writing this.

This morning, I visited the AKI Finals 2018 exhibition again. Now on my own. I arrived early and it was very quiet, giving more time to absorb and enjoy everything. It made me realized, I had missed some things last Friday. I found the works of the following graduated students noteworthy (in the order I encountered them):

Yesterday, when seeing a drawing of a the B4 orthographic projection of the tesseract (the first hypercube), I thought about how it would look it pentagram would be extended with 'cubes'. Today, I came up with the following drawing:

One third of all 428,362 sets of equations for the the Irregular Chocolate Bar problem for the problem of finding 22 unique integers which can be divided in up to and including 10 partitions, has been processed. Now at 33.35%, 7380 unique solutions have been found. It seems that the processing of an equation is taking more time and that more solutions are found. This makes it hard to estimate when all sets of equations will be processed.

This afternoon, I first went to Concordia for the part of the AKI Finals exhibition that I had not seen yet. I liked the works of Pjotr Stam. Next, I went to the AKI building. At 17:08, I bought the book Emma & Thomas that Mike de Jong had on display for € 20.00. It is one of five he had made. I met with Benedetta Guidi, looked at her works, talked with her about them, and thought about which of her works I want to buy. I also talked a little with Eline van Hove, mainly about discrete mathematics.

Last Thursday, I met with Benedetta Guidi and looked at her works, which are about the intimacy of two people meeting. Yesterday morning, I let her know my decision to buy one of her works. I like this work, because on one hand it is very realistic, and on the otherhand it vague, very colourful, almost abstract, if you do not recognize the figures that are in it. The male figure is less clearly visible as in more of her works. This afternoon, I went to the AKI to collect the Untitled work.

I went to the Graduation 2018 exhibition at Royal Academy of Art in The Hague. I first went Amsterdam, where I went to bookshop Scheltema and bookshop Het Martyrium. At both bookshops I did not buy anything. In The Hague, I payed short visits to the American Book Center and bookshop Paagman. At 14:14, I arrived at the Royal Academy of Art and stayed there till 19:50. I am almost sure, I missed some rooms, because it is a rather compex building. I found the following graduates noteworth (in the order that I encountered them or their works):

Today, I went to the Gerrit Rietveld Academie Finals 2018 exhibition. I found the works of the following graduates noteworthy (in the order I encountered them):

At 14:45, we had some rain, the first time since June 25, when there was 1.2mm of rain according to data from Royal Netherlands Meteorological Institute for station 665 in Enschede. This morning, I spend some time cleaning up leaves that had fallen from the tree in our garden. At the moment we are in the 5% dryest of years on record. In the past weeks, our magnolia has had some flowers, but it seems that they wither before they are fully open.

In the evening, I was in the city with a friend, and we went to Concordia where there was an opening an exhibition by Jessica Segall. We were a little late for the artist introduction and joined at the end of Q&A session.

In the evening, I opened the window to listen to the thunder outside. I also saw some lightning. We did get some drops. It seems there was some rain last night (less than 0.5 mm, it seems). That is the first rain since July 9.

At 15:31:59, I bought the catalogue Ars Longa, vita brevis - Human life in nine episodes written by Arnoud Odding in English and published by Rijksmuseum Twenthe in 2018 for € 15.00.

I went to the opening the exhibition Beyond the grain at photo gallery Objektief with works by Lena Paßlick and Lex Chen. Both are also invited for the Best of Graduates 2018 exhibition at Ron Mandos in Amsterdam, which opens at August 3. 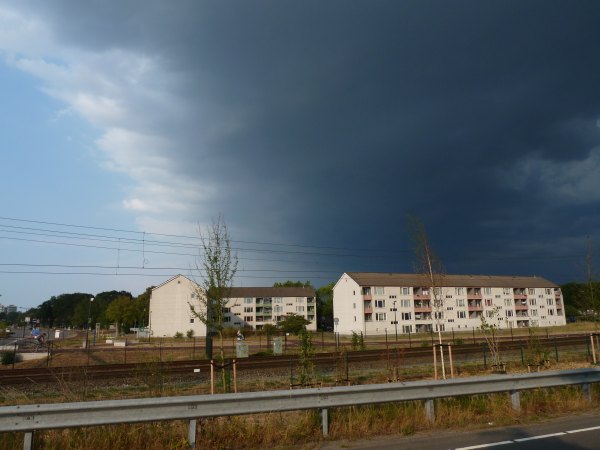 At the end of the day, a colleague of mine, mentioned that rain was coming. It was indeed, and I decided to leave for home. When I came outside at one side of the building, there was a blue sky and the temperature was above 30° Celsius. When I came to the other side of the building, I saw a large dark cloud approaching. I stopped to take a picture. About half way, I felt some drop of rain, while already hearing thunder overhead. I put on my rain poncho, just to be prepared for a heavy shower, but it did not happen. Later, at home, it started to rain a little stronger for a few minutes, barely enough to make the streets wet. A little up North, in Losser, they got much more rain, up to 57mm, resulting in some roads being flooded. 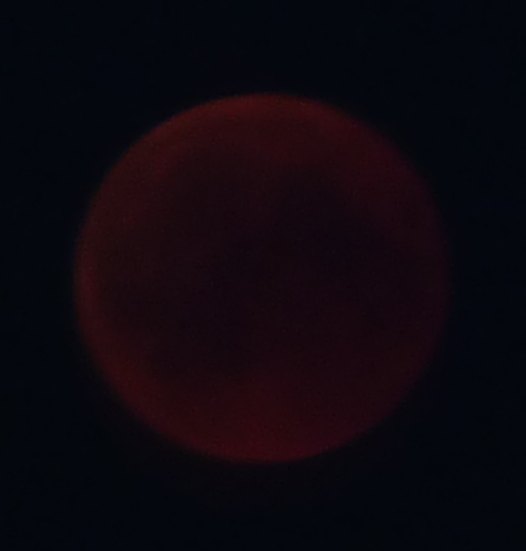 Yesterday evening, just before ten in the evening, I biked around, to see from which locations the moon is visible, in order to know, from where I should be able to see the lunar eclips this evening. Just after ten this evening, I was on a nearby bridge, but could not discover the moon, probably because the sky was to light. Half an hour later, I went outside again, and around 22:35, I took the above picture from a location not far from my house. I took the picture with my Panasonic Lumix DMC-TZ8 using the stary-night mode from a simple tripod at maximum optical zoom. The picture shown is but a small part of the actual picture. Later, I took some more pictures, when the moon started to come out of the core shadow. Some of the looked like the pictures, I took on September 28, 2015.

Last Tuesday, I started to work on an implementation of a set of integer intervals using a tree structure. This made me return to the persistent balanced tree, I worked on in January. In the past week, I worked on improving the code, resulting in a new version. When MAX_SHARED is not defined, it does keep the tree balanced, in the sense that the difference in height between each left and right subtree of a tree is at most one. In case MAX_SHARED is defined, this is not the case, whenever balancing would require to no longer share trees that could still be shared. This reduced the memory usage with the introduction of some imbalance. This months interesting links
Home | June 2018 | August 2018 | Random memories