In the afternoon, I went to Rijksmuseum Twenthe for the exhibition De Naakte Waarheid (The Naked Truth. I found the following works notable (in the order I saw them):

Afterwards, I went into the city. At bookshop Broekhuis there was an exhibition with works by Jeanine Wubbels. I also went to photo gallery Objektief to see the exhibition MALE. HAIR. -3 by Rem van den Bosch.

This evening, I went to collect the art work Paarse Dag 2 made by Simone Zacharias, which I had first seen on Saturday, February 2. Again, a work with both figurative and abstract elements, just like most of the other works that I bought in recent years. It seems that purely abstract is too abstract for me. I also like the colours in this work, as purple ('Paars' in Dutch) is my favourite colour.

I went to the opening of the exhibition Colourtramp by Maria Britze at B93. I found her newest work, drawings made with colour pencils, the most interesting, and I was not the only one in that regard. I want to buy one of these drawings.

This morning, I noticed that some of the outer shells of the flowers of our magnolia had cracked, a sign that it might start flowering within some weeks, which would be rather early this year. I decided to have a look at the one seed that I had discovered last year and kept in our shed, only to discover that it was covered with mold. In the afternoon, told Annabel about. She went to inspect the magnolia and discovered two other withered pods that had contain one or two seeds. Annabel noticed that it is not so difficult to grow a magnolia from a cutting. I told her, that I rather grow one from a seed. This fall, I will look more carefull for seeds and hopefully treat them better.

While thinking about better ways to solve the Octopuszle, I decided to take one of the diagonals away, and try to fit the 64 remaining pieces into a 8 by 8 grid. Even then, the program did not find many solutions per hour. I let the program run some time until it found 1900 solutions. I did think about some ideas to find more solutions. I did realize that the remaining puzzle was actually The China Labyrith inside a rhombus. After realizing this and remembering the statement: "It was soon discovered and proven that the number of separate groups (the blank counting as one group) will always equal the number of loops (holes in the solution)", it became clear to me that one of my approaches to find more solutions, was never going to work. Also it is clear that the one piece with no lines, cannot be at the edge, but must always be in the middle. This evening, I worked at the visualization of one of the solutions, also to verify that my mapping to an exact cover was actually correct. The visualization uses one of the lines generated by the exact cover algorithm.

I went to XPO to see the exhibition A Blue, A Purple, Aloë vera, Aster, Banaan, Cupcake, Engeland, Hibiscus, Pilli Pilli, Prinsessen Roze, Selectie and Ultiem by Evangeline Clark. She was there herself and I talked a little with her. I think about buying Pilli Pilli. Next, I went to bookshop Broekhuis, where at 16:08:40, I bought the book De edele kunst van not giving a fuck written by Mark Manson, translated from the English The Subtle Art of Not Giving a F*ck into Dutch by Annoesjka Oostindiër and Henk Popken, published by Bruna Uitgevers in 2017, ISBN:9789400509023, for € 20.99. I walked through the city and went to have a look at the exhibition Monsterproject at Concordia. In a bookshelve, I discovered a copy of Jaarboek 09/10. I made some inquiries as to if it was on sale, but it was not. I did get some tip about another place where the AKI yearbooks can be found.

A large part of the day, I worked on a program to generate an exact cover problem for solving The China Labyrinth within a more compact, hexagon shaped, enclosure. As usual, a one off error, was the last bug that kept the program from running. Below one of the solutions is given.

I noticed how this solution consists of three parts (counting the empty piece as a separate part), and it only has one loop (circling the empty piece), which seems to be a counter example of the statement that I quoted yesterday. Maybe the proof is not as solid as it was thought. Because there are so many solutions to the puzzle, I thought that maybe an algorithm that would search for solutions at random would give a more varied number of solutions. When I started working on this, I discovered a bug in the algorithm, that was introduced when I did some experimentations on reducing while solving. When I fixed it, the program returned many solutions per second. I decided to also give it a try at Octopuszle and for that too it produced many more solutions than before. Below ten random solutions are given.

Yesterday evening, I made some modification to my Exact Cover program, such that it can be used to estimate the number of solutions of the Octopuszle. This morning, I made some modifications of the program. The idea of the 'sample' mode is that it will run for two minutes using a random selection of vectors from the column with a minimum value of vectors. While doing so, it measures the distance of the solutions spaces that has been covered under the assumption that each selection covers an equal part of the solution space. It also counts the number of solutions that were found. These two can be used to estimate the total number of solutions. However, the assumption is not correct and does influence the result. This morning, while biking to my office, I realized that there is an easy way to estimate an upper limit on the estimation. There are 256! ways of putting the pieces within the 16 by 16 square. Now, what is the chance that all pieces fit. There are a total of 2.(2.162-16.15) + 2.(2.162-152) relationships that have to meet. If we assume that all the chances are independent, which is probably not the case, than the number of solutions are about 2.409128076060726988778E+170 (found by calculating the expression 256!/(2^(2*(2*16*16-15*16)+2*(2*16*16-15*15))) with Keisan Online Calculator. I have no idea which statistical method I should use to look at the numbers produced by the sample mode, but if I just have a look at the numbers, it seems to return a number around 10163 solutions. This is close to the theoretical maximum number of solutions.

Because we have plans to make a trip to China this year, I have decided to learn some Chinese. I have installed the ChineseSkill Android app and finished some of the basic lessons, but since this morning, I get a message that I am out of pandas and I have no idea how to get more. Maybe because I have no payment method installed. Maybe I have to take a look at some other Android apps. I am also thinking about making my own flashcards and go over them when I bike to my office or listen to language learning mp3's. I found the video 200 Chinese Phrases for Beginners from the Learn Chinese 360 YouTube channel, which seems to be an interesting starting point to improving listening. This morning, I also started reading the Dutch book Het karakter van China (known in English under the title China: Empire Of Living Symbols) by Cecilia Lindqvist, which might be a good way to learn Chinese characters.

At the end of the afternoon, one flower of our magnolia had opened a little. Expect that many more flowers will open in the coming days.

Early this evening, I bought the drawing Bikerider from Maria Britze after her exhibition Colourtramp at B93 came to an end today.

In the afternoon, I went to Amsterdam with the intention to go to get some more information about the Post-Wat & Contemporary Art auction, but it turned out that the went to the wrong place. Afterwards, I visited the bookshops Het Martyrium and Scheltema but I did not find anything interesting enought to buy. 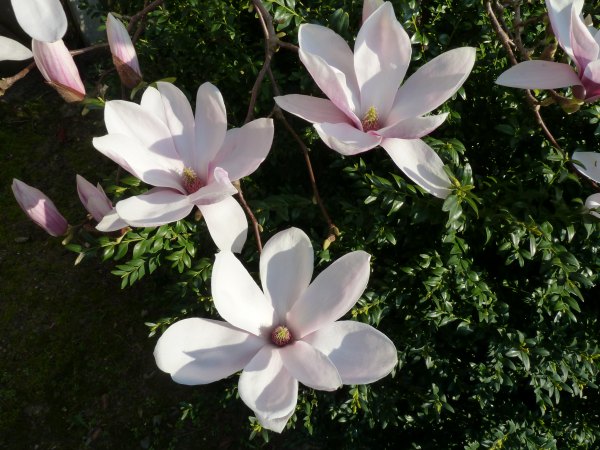 When I went into the back garden this afternoon, I smelled the nice fragrance of our magnolia. About half of the flowers had opened. It very much like spring and it made me happy.

Today, was the yearly open day of the Dutch hackerspaces. I arrived at the TkkrLab space shortly after ten in morning and left after midnight. We had about twenty visitors and I did some guided tours and showed some of the projects I have been working on in the past years. Annabel also came and we spend some time thinking about the puzzles she is developing. I also donated my Teco VA120 terminal to the space to be used for the new bar system.

This afternoon, I went to the lecture Het naakte lichaam en zijn sluier (The naked body and its veil) by Ger Groot, a Dutch author and philosopher at Rijksmuseum Twenthe, which was given in the context of the exhibition De Naakte Waarheid, which I visited on the second of this month. Most of the people were above my age. During the lecture several nude images, some of them almost pornographic, were shown, while the lecturer explained that it is almost impossible to look at the naked body without it elicting emotions, often of an erotic nature. When presented with a nude image, our eyes search for genitals almost automatically. It is difficult to be objective. We have a body and we are a body. He stated that science, asking the how, while ignoring the what, is in a sense the opposite of pornography, which deals with the what, while ignoring the how. We often switch between the scientific, rational way of looking from the enlightenment and the romantic view, but that the latter often wins. The body remains itself. He showed several images from artworks from the exhibtion and when I watched the exhibition again, I looked with different eyes. I was especially touched by the drawing Paring (Intercourse) by Aat Veldhoen. I also noticed the Dutch translation of the quote The question isn't who is going to let me, it's who is going to stop me ascribed to Ayn Rand on the wall with the most pornographic pictures of the exhibtion, three pictures from the A History of Sex series by Andres Serrano. At 15:05:01, I bought the book De Naakte Waarheid edited by Doreen Flierman and Thijs de Raedt, written in Dutch, published by the museum in 2019, ISBN:9789462622296, from the museum shop for € 19.95.

I also went to the exhibition Graduates 2018 at photo gallery Objektief with pictures by Christine Mooijer from the Soliloquy series, Marvel Harris, Yasmilla van Vliet, and Romina Demy.