Conny and I went walking this afternoon. But before we started on our walking trip, we first visited a marke stone and looked for a triangulation point. At 13:36, we visited the marke stone Steenen paal bij de Nijkerksdijk. It actually is not a marke stone, because the border of the two marke Haaksbergen en Honesch and Langelo runs to the East of it, but a stone that marked the border between the border of the provinces Overijssel and Gelderland as it was established in 1775. At 13:42, we searched for triangulation point 340331. On the side of the road we found a sign to locate the triangulation point stating the number 340 (on top) and 331 (on the bottom) with the number 2,7 in the middle. The 2,7 seems to indicate the distance to the actual triangulation point. It was not clear in which direction we should search. At home, I concluded from some pictures, which I only noticed then, that the point was close to the road and just below the surface. We probably have stood on top of it. The first part of our walking trip was along a brook called Koffiegoot (coffee gutter), which probably was called like this because of its brown colour. At about 14:10, we found the marke stone Hellekampspaal, which is rather large, about 170 cm tall and measuring 48 by 48 cm wide, and also served to mark the border between the two provinces and was placed there after a long running border conflict between 1611 and 1775.

Yesterday, I came along a mentioning of live-bootstrap on Hacker News, which also lead me to the Bootstrappable builds website. I also found the Bootstrappable builds article on LWN.net. This morning, I spend some time digging into it, trying to understand the live-bootstrap GitHub reposity. I actually ended up looking at the oriansj/stage0 GitHub reposity in particular the hex0_x86.hex0. I am a little surprised that it is opening files as specified on the command line, instead of simply reading from the standard input and writing to standard output. According to bootstrap-seeds README.md file, one way to process the hex0_x86.hex0 file is using the sed UNIX utility to remove the comments and the xxd UNIX utility to change the hexadecimal pairs to raw bytes. However, the README.md also states (in capitals): "NEVER TRUST ANYTHING IN HERE". Because, yes, you have to trust the implementation of sed and xxd. I wondered whether Brainfuck could be of any help in this area or as a basis for a bootstrap environment, because it is a very simple language for which a large number of interpreters in many different languages have been implemented. I even spend some time working on a C program to generate Brainfuck code as I did before for the Brainfuck interpreter written in Brainfuck.

Addition May 6: In a comment on Hacker News, Kragen Javier Sitaker writes that he did consider Brainfuck for a Universal virtual computer (UVC) and bootstrapping a compiler from a tiny compiler using Brainfuck.

Yesterday morning, the temperature dropped as low as -1.3° Celsius (and -5.7° Celsius at ground) level at Twenthe Airport, while today it went up to 27.0° in the afternoon and remained above the 20° for the rest of the day, while in the past weeks the temperature but barely reachted 15°. This might also explain why today, there were still some flowers on our magnolia. In the afternoon, Conny and I went walking in a forrest just North of the area where we walked last Sunday. On the way there, we stopped near triangulation point 340331 and around 12:52 we succeeded in locating it just below the surface. After having it photographed we covered it up again. When we rested on a bench during our walk, we say a bee hover over the ground and than started to dig at some spot. After about a minute it had disappeared under the ground not leaving any visible hole. At home we created a small kitchen garden from the germinating seeds that Conny got from the supermarket Albert Heijn as MoestuinMaatjes.

In the past week, I created a BrainFuck generator, which generates BrainFuck from a relatively simple programming language, for the purpose of writing a BrainFuck program that could replace the seeds for the oriansj/stage0 github repository. This BrainFuck basically implements the command line: mentioned in the README.md. I extended my BrainFuck interpreter / code generator with the -eof0 command line flag for returning 0 when end of the input has been reached. I used the following two command to test it: Where hex0.bf contains the BrainFuck program generated by the BrainFuck generator page. I know that it does really solve the basic problem of generating a binary without using a binary that one cannot trust 100%, but it does give an alternative for the sed and xxd commands or using. Even using a BrainFuck interpreter written in BrainFuck of a BrainFuck to x86 executable compiler written in BrainFuck cannot solve the fundamental trust problem.

After having visited my mother, Conny and I visited Radio Kootwijk. We walked around Building A and when we saw dark clouds approach, we decided to go home and not search for a possible border pole of the municipality of Apeldoorn.

In the past weeks, I have been working at the HEMA puzzle that I started looking at on October 27, 2017. Some weeks ago, I noticed that one solution for the puzzle that Conny had found could be changed into a number very similar solutions by pair wise rearranging of pieces. This raised the question about what would be the shortest arrangement of the 89 solutions, such that consecutive solutions had the largest number of pieces in common. I developed a program for finding it. The shortest sequences which was found by the program is:

The diagram below shows the similarity between solutions in the order the solutions are shown below. The redness indicates the extend that pieces that are not exactly at the same position and orientation, do overlap.

Some weeks ago, The Royal Netherlands Academy of Arts and Sciences awarded Jaap van Dissel, the Director of the Centre for Infectious Disease Control at the National Institute for Public Health and the Environment (CIb-RIVM) the Academy Medal for the way in which he has approached his role as scientific advisor to the Minister of Health, Welfare and Sport and the Dutch Government's crisis team during the COVID-19 pandemic. Recently, The Independent Panel issued their Main Report in which they concluded that the COVID-19 pandemic could have been far less serious, In the report it says: On 30 January 2020, it should have been clear to all countries from the declaration of the PHEIC that COVID-19 represented a serious threat. China had reported upwards of 20 000 confirmed or suspected cases and 170 deaths. The number of countries to which the virus had spread and where local transmission was occurring was growing by the day. Even so, only a minority of countries set in motion comprehensive and coordinated COVID-19 protection and response measures — a handful even before seeing a confirmed case, and the remainder once cases had arrived. My impression is that the CIb-RIVM did not take the PHEIC of the WHO very serious. Even when several weeks later the first cases were reported in the Netherlands, it felt like they were playing it down, afraid to cause panic. It seems that for the Academy the COVID-19 pandemic only started at the end of March 2020 and did they did not take into accound his role in the slow responds of the Dutch Government to the January 30 declaration of the WHO.

This morning, Conny and I went walking (again) in the South of the Lankheet estate. On our route there, we stopped to have a look at the Morspaa, marke stone with number 48.50-02. At 9:27, we visited the stone, which in 1712 was placed at a location about 17.5 meter to the southeast. At some point it disappeared underground. On September 4, 2003, it was dug up and placed at its current location. At 10:05, we found the Mallumseveenpaal, which is about 1.80 meter high and measures about 45 by 45 cm. In this regard, it is very similar to the Hellekampspaal we found on May 2. Not so strange, because it too is placed at the border of the provinces Overijssel and Gelderland. It is also at the border of the marke Langelo (to the north) and Mallum (to the south).

In the afternoon, Conny and I went to charity shop Het Goed to donate some goods. We also went in to have a look at the books and other things. I ended up buying four books and a jigsaw puzzle. At 15:39, I bought the following books:

TkkrLab is moving to a new space: Space 6, which is at Marssteden 98. Anything mailed to 'NL 7547TD 14' should arrive. This weekend, I helped a few hours moving some things, mainly Samla storage boxes.

In the past week, I continued working on the HEMA puzzle, which resulted in the animation/tool shown below. The large square is basically the same as the one shown before, except that green is used to show that there exists a solution between the two solutions that has less changes with both solutions, meaning that difference is implied by other transitions. Bright green is used to indicate that the changes do not overlap, meaning that there at least two intermediate solution and that the transitions are commutative. On the right it shows the colours of the pieces that change place between two consecutive solutions. The more colours are shown, the more pieces change place. On the sides of the large square, black lines select which solutions are selected. On the bottom it shows these solutions and the one before and after it, when applicable. The following keys can be used (after clicking in the animation) to manipulate the display: The text area below the animation shows on the first line the number of coloured squares on the right. This can be seen as a measure of the quality of the ordering of the solutions. The remaining of the lines are used to show the current ordering of the solutions.

In the morning, Conny and I went walking in the Lankheet estate. We walked through the water park and ended at the Kidney Pools, an art work by Jim Buchanan. The water park is created in an area where there used to be water-meadow and now is made into a constructed wetland (12 hectares of reed bedds) to purify water from the Buursebeek to be used in the forests of the estate. We entered the Kidney Pools through the round tunnel which is visible in the picture below. It somehow reminded me of the exit of the Eder Kemo age of Uru: Ages Beyond Myst. 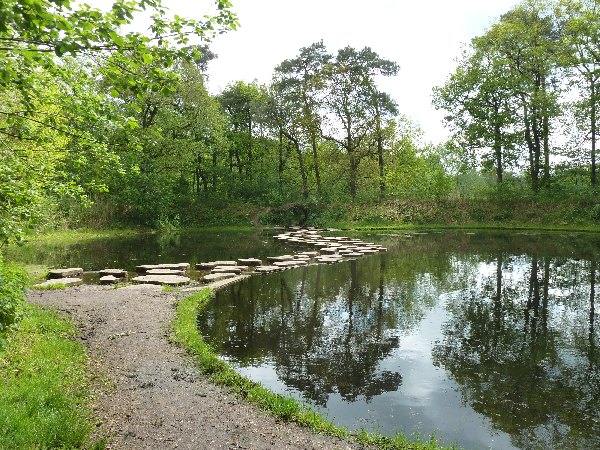 This afternoon, I received a small PCB with a MCP4728 IC on it, which I bought online. The MCP4728 is a 12-bits, quad digital-to-analog converter. I am thinking about using it in combination with a small microprocessor to create a control voltage generator for a modular synthesizer. I could use the Adafruit MCP4728 library.

I watched GOGBOT Café - Welcome to the post-truth paradise! (It could not pay my full attention to this.) It had the following items: Because I stopped watching the live stream, I do not know if any discussions were held afterwards.

I ordered some items from TinyTronics including a multimeter, a JYE Tech DSO150 (a simple oscilloscoop), three Nano V3.0 compatible boards, and two FM62429 ICs. The FM62429 IC is a two channel digital volume control. I am thinking to build an ADSR envelop generator and VCA from a Nano and a FM62429.

At 11:04:51, I bought the book Het markeboek van de Eschmarke edited by Frans J. M. Agterbosch and H.F. Mensink, written in Dutch and published by Stichting Genealogische Werkgroep Enschede in 2010, ISBN:9789074983273, from bookshop Broekhuis for € 27.50. I got the book Wat wij zagen written by Hanna Marleen Bervoets in Dutch and published by Stichting Collectieve Propaganda van het Nederlandse Boek in 2018, ISBN:9789059654334, for free as part of the Boekenweek. This months interesting links
Home | April 2021 | June 2020