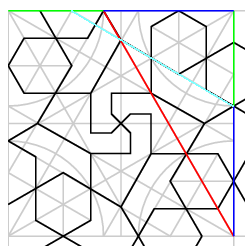 Tonight, I worked on Arabic Geometric Pattern as given on plate 30 of the Bourgoin book. This is a repeating pattern within a square, where there is a fourfold rotation along the center of the square (as shown on the right). I needed to establish the size of the square in terms of the unit vector. For the three preceding plates this had been of the form: a + b.sin(60°), where a and b are integers. I soon recognized there was something strange with this plate, because the square was divided into four smaller squares, and it is known that there are no rational a and b such that a = b.sin(60°). At first I thought a equals 3.5 and b equals 4. 4sin(60°) = 3.464 (and a little bit), which is close to 3.5, but not exactly the same. I tried some other combinations, but did not find any. I was about just trying to find a value by approximation when I noticed some interesting triangle which is marked with colours in the image shown on the top right. From this triangle we can conclude that the length of the blue line times two equals the sum of the lengths of the blue and green line divided by sin(60°). From this we can derive that the size of the square is 3/(1-tan(30°)) = 7.098 (and a little bit). When I used this value, and applied some fudge factors for some other coordinates, I did find a solution that looked pleasing. If one looks closer, one notices that there is a problem with the angle of the light blue line. It has an angle of about 59.525°.

In the past weeks, I have been working on my Nonogram solver again. This actually was kick started by Exact Cover and ZDD. This made me think about ways to represent all solutions of a nonogram in a tree-like fashion. If you look at one particular filling of a row or a column it is possible to assign numbers to the cells that express how far you have come with using the cells that need to be placed. You start by prepending an imaginary empty cell with the number zero. The number for each cell is now one more than the previous when either that cell or its successor are filled, otherwise the number is the same. For a row or column that is not yet completely filled, it is possible to calculate which numbers could occur at each cell if one would look at all possible ways to complete the row or column. Because each cell of a nonogram is part of a row and a column, one could also look at the combinations of numbers for the row and the column that could occure. Furthermore, one can reason about the combinations that can occure in each group of four ajoint cells. If certain combinations are excluded this likely will have implications for surrounding groups of four ajoint cells. I applied the program to the solution I found on February 27, 2006, and after about one day, this resulted in the above partial solution. The image was created with the use of two small programs from the output generated by the nonogram solver. Later I discovered that the output of the first row and the first column is incorrect.

This evening, I biked to the house of Rudi to play Go. I arrived at the same moment as Huub. When we went in, we found that Rudi and Taco already had started a game. I looked at the board and made the remark that they already had entered the end game. It was not exactly the end game, but not very far from it. Lets say: "Late middle-game". Huub and I started a game, where I got a three stone handicap. I really did not think much about the strategical aspects of the game, just making a lot of small moves, and at about one third of the game, I was seriously behind. In the end I lost with about thirty points. When we finished our game, the game between Taco and Rudi had not come to an end yet.

I left quite soon on my bike. It was still warm, and I left without coat. I took the Derkinkweg, which is a small road, just outside Enschede, without any lightning. And because the light of my bike is not so strong, I had to watch quite carefully where the road was going. I realized that I would be in trouble, if I would stop, because then I would be standing in the dark, without being able to see where the road was going.

Today, was the hottest day of the year. Of course, you never can be sure, but the chances are small. When I left the office the temperature was still above 32 degrees Celsius, and I could not bike fast. But when I was in the city a cool breeze started to blow and in the next hour the temperature almost dropped ten degrees (graph). Than later in the evening, there was some thunder and some rain.

This weekend I worked on a modification of my Nonogram solver, that also takes into account the number of filled cells in the upper left corner as an additional metric, besides the row and column state numbers. The idea is that this would be an additional constraint. I hoped that the restriction would be stronger than the expansion resulted by the increasement of possible states in each cell, but that proofed not to be the case. The number of states that the the program found in each cell increased, and I did not see any dramatic reductions to appear. The memory usages of the program also increases to such an extent that I fear that the program cannot terminate on the given problem. Memory use was already a problem in the previous version. I am not sure whether I will proceed in this direction any further or declare it a dead-end and try out different ideas.

This evening, I went to the university to play Go. The bar was closed, and the only persons present where Rudi and Taco, who already had begun playing a game. I watched them until Huub arrived. We agreed on a two stone handicap for me. At middle of the end-game, Huub made some moves that made me nervous, and instead of thinking about my moves, I played too quickly, and resigned after when about twenty stones where cut-off. I could have easily avoided it being cut-off. We decided to continue the game, just for the purpose of counting, and concluded that I would have won with 64 against 42 points, had I not been so stupid. After playing the first twenty moves again, we watched Rudi and Taco finish their game.

When I went outside around half past ten, I discovered that I could still bike without coat. As it was warm enough. At home in the garden, I could vaguely see the milky way. Just when I wanted to go inside, I saw a bright light in the sky passing overhead very slowly and quickly dim. I felt it must have been a satillite and I used Heavens Above to search for more information. It seems I saw a flare of Iridium 80.