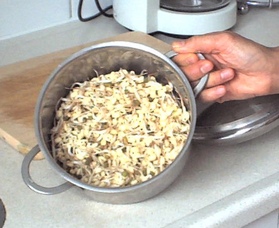 Li-Xia eats some Mung beans every morning. She usually eats them from a little pan and puts in some new beans when she is finished. But yesterday she did not eat the beans because we had some salade left that she wanted to eat on bread. Then when she opened the pan this morning, the beans had sprouted. We decided to eat sprouted beans for dinner. This picture shows the sprouted beans in the pan. 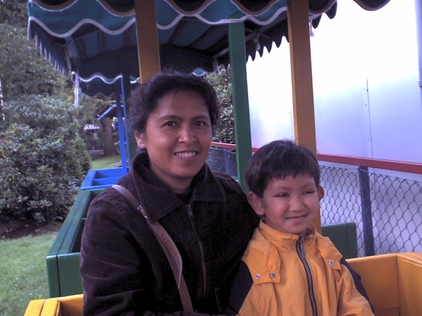 The weather forcast for today gave a 70% rain chance. When we got up the sky was blue and I went to the market to buy some bread. When I biked home I already saw some white clouds in the distance. When I arrived, I heard that we were going to "De Waarbeek" with Bert and Cornelise and their children. (The last time we went there was on Monday, July 28, 2003.) When we left around ten o'clock, white clouds were already drifting overhead from the North West. When we arrived we saw that our friends had just gone in. We had a lot of fun taking all the possible rides. Li-Xia stayed with Andy most of the time. Around twelve we sat down on the table near the merry-go-round and ate the bread we brought us, while watching Andy going round and round. It looks like he tested all the possible seats. Around one o'clock it started to rain, but luckily there were still enough rides to take, such as riding the dodgem cars. Annabel went several times with Macy (the daughter of Bert and Cornelise) and I took Andy several times with me on a ride. At about the time we thought it would never stop we raining, the sky cleared again a little, and we even saw some patches of blue. We had some french fries, and then it started to rain again. Around half past three it was dry again, and we decided that we would drink tea at their place and go home at five. They biked home first, and arrived dry.

Today, I was going to bring Annabel to my sister with whom she will stay till the end of the summer. That is about 24 days. They are also going to Sérignan, France for about two weeks. While driving there, I saw a small blue car driving close behind a camper. I quickly noticed that there was no driver in the driver seat. When we overtook the camper, I saw that the little car was pulled like a trailer, with two metal bars going from the hook to the front of the car. I have never seen before, and I wonder what is the mechanism used for turning the wheels of the little car.

After I dropped Annabel off and said goodbey to her, I drove to Utrecht. I had some problems finding a proper parking place outside the city, but I did find a free parking spot less then twenty meters from a bus stop. The bus took me to the center without a stop. Together with me there was an Italian couple with their daughter who asked what was the best place to get off the bus if they wanted to see the Dom Tower, which used to be attached to the Cathedral of Saint Martin. I decided to walk with them into the center. When the tower was clearly in view, I said goodbey and turned to the left towards Broese. I was a little disappointed about the shop, because it seems that the computer science section has been reduced to the popular "how to do" books. The sections on the soft science (literature, psychology and such) still seems large. I did not find any interesting books. Next I went to 'De Slegte' bookshop. There also I did not find any books worth to buy. I have to say that I did study the structure of the shop and made some sketches of the floor plans.

I walked around a little, bought a glass of orange juice, went to the toilet at the HEMA shop for €0.20, and looked around Radio Centrum Electronica, a shop that I used to visit often when I was younger.

I went back to the station and took the bus back to our car. While I was eating my oranges, I heard a boy behind me phone a friend and tell that a girl had blocked him on MSN, and a man in front of me place an order with a Chinese take-a-way restaurant. Around five o'clock, I arrived at my mother's place. She prepared a dinner for us and we had time to talk about many things. Around a quarter to eight I left for home.

Today, I bought a Trust 2000P 5.1 Soundforce. In the evening, Li-Xia and I watched the second DVD from the extended version of Lord of the Rings: The Two Towers sitting in the middle of six loudspeakers. Quite an experience.

At the moment, Andy is completely mad about the Muppet Shop. It is shown on Belgium television every morning at 10:25. Today's episode was episode 46 with Peter Sellers. Yesterday it was episode 12 with Peter Ustinov. We also borrowed "The Muppets Take Manhattan", "Muppet Treasure Island", and "The best of The Muppet Show" DVD's. Yesterday 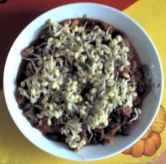 Since two weeks ago we got some bean sprouts, I have been experimenting with it again. This evening has some bean sprouts (close-up) for dinner. Li-Xia made kidney beans with unions and a pot (350 ml) of tomato sauce with olives. I sprinkled some of the lightly fried bean sprouts on top. It was really nice.

Going on a date

This morning, Li-Xia and I had some appointments. Both Annabel and Andy were gone for the day. Annabel is in France with my sister and Andy went to the summer day care. I took the day off, also because they had predicted very nice weather and because it could well be the last nice summer day, because they predicted thunderstorms for Thursday. Just after noon, we biked into the city and went to some shoarma restaurant. We ordered a donner kebab, falafel, and some salad. We both felt very romantic, like we were on one our first dates. Afterwards we walked around the city. At home I took some pictures of Li-Xia.

In the evening, I went to the Go Club to play Go. I was afraid that I was going to play very poor, because I did not play for many weeks. I played against Vincent, a four Kyu player, with nine stones ahead. During the end-game, I made a unneccesary blunder. We decided that I was allowed to take back my stupid moves, and to finish the game and do the counting. According to this counting, I would have won with 35 points. Altogether I played much better than expected.
Home | July 2005 | September 2005