This afternoon, I again spend some hour trying to make Uru: Ages Beyond Myst work on lixia, but it simply kept on crashing. I do not know whether it is the graphic card, the sound card or even the RW-drive. In the evening, I got the idea to try to install it on ester and that worked. Of course, the graphic quality is lower, but it is still okay to play the game. Sometimes it shows some anomalities, but that is okay to me. I have decided to keep a logbook of playing this game. 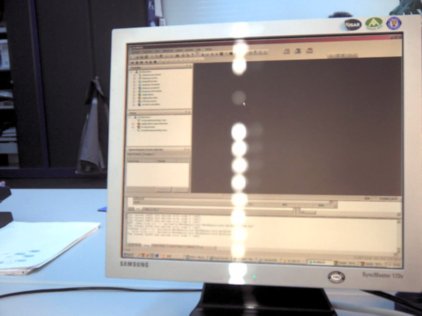 Real-time view of the solar eclips

Around eleven, the spot had moved off my screen. But we found another hole to look at the sun. It was a little darker outside, but it was not very impressive.

This evening, I went to play Go. I played against Ton and got a six stone advantage. I did not play very well, because I lost with 33 points. Then we watched Marcel and Vincent analyze their game and them starting another game, where Marcel explained about what are good moves and bad moves. He explained to us, that it is especially important to prevent yourself from becoming enclosed. When he gives some comments, it all seems so simple, but yet, I am afraid that the reality is far more complicated. Ton and I biked home together till the city center, were we both went our own way.

Today, it is 12 years ago that we got married. I suggested that we would have a lunch in the city. While biking there, I picked up three chestnuts near my old office. Li-Xia and I met around 20 past 12, in front of bookshop "De Slegte". Than we walked went to Camel and ordered the same as last time, shoarma, falafel, and some salad. We enjoyed our lunch, and then walked around a little and looked through some shops. When I had to go back to my office, I said: "The party is over again". When I arrived in the office, I put the chestnuts on my desk. Later, I realized that they were of the type that turn brown very soon. And indeed, before the end of the afternoon some brown spots appeared.

On Slashdot I read about the CERN newsletter that reports that a new paper by F.I. Cooperstock and S. Tieu has demonstrated that one of the prime observational justifications for the existence of dark matter can be explained without any dark matter at all, by a proper use of general relativity! It should be noted that the claim is refuted by the article Singular disk of matter in the Cooperstock and Tieu galaxy model.

I biked home without coat on because it was around 20 degrees Celsius. Which is rahter warm for the time of the year.

This evening, Annabel and I went to the university to play Go. When we arrived there was nobody, but we were early. Annabel discovered the exposition of Peter Geerts with his musical instruments, and she asked me to have a look. I remembered having seens some of these instruments many years ago. When we returned Rudi and Marcel had arrived. We waited sometime, but nobody showed up. Rudi and Marcel started a game, and I decided to watch them. When they were finished, I played a quick game against Rudi and Annabel played against Marcel. I resigned the game, when I suddenly realized that a large group was dead. If this group had not died, I would have made a nice score. We analyzed the game a little. Although I lost, it was still an interesting game. Afterwards, we all went back to have a look at the musical instruments, and Annabel and I played with a kind mechanism consisting of three spirographs with bars connected to a triangle, drawing very interesting curves.

Today, Annabel became eleven. In the afternoon she had her birthday party. Five girls from her class came. We gave them something to drink and some cake. Then I took them with the bus to Bowling Enschede. We arrived there shortly after four. The children were given something to drink and Annabel got her presents. Then they looked around. We got lane number 6. Before I was there, the girls already had started entering their names in the computer. Annabel was the first on the list and immediately took the lead, and never lost it. She won with 95 points. The lowest was 61 points. Then they were served some french fries and some snack. It was around a quarter to seven that we left. When we came outside, we noticed that four divers were at the bottom of the diving dome, which is at the enterance of the bowling center. The girls looked through the windows and waved to the divers. Then we walked back to the bus stop, where I discovered, I had left the video camera back at the bowling place. I ran back and forth to collect it. It was around a quarter to eight that we arrived home. Two mothers were already waiting. The girls soon left on bike, with the two mothers and Annabel and I riding with them. Annabel felt that this party was much more fun than the last time, when she was allowed to invite her whole class because she did not have a birthday party for some years.

When they had left, Annabel installed Sims 2 on our computer and started playing it. Besides Sims 2 she also got a pair of soft inline scates as a birthday gift from us.

Today, my sister and my brother-in-law came to visit us with their two sons. It's the same sister with which Annabel went on a holiday this summer. I had bought some Grolsh beer for my brother-in-law, because he loves to drink some beer. He was quite happy about it. I also showed them Myst: Exile and Uru. I borrowed Myst: Exile to my sister after she played it a little on the computer. At the moment, Li-Xia has no intentions on finishing her game anyway. While showing some parts of Uru, I also made a discovery. See description in the logbook.

This evening, I used the Childhood Growth Utility Programs to estimate the adult height of Annabel. She weighs about 36 kilo. Her lenght is 145.4 cm and her sitting height is 74.2 cm. That resulted in an estimated adult height of 167.7 cm. Which is somewhere in the middle of our heights. Of course, it is just an estimate and it could be wrong by as much as 10 cm.

This evening, when I was Uru, I suddenly realized that the movie Memento was on television. It already had started, so I missed the first twenty minutes. I guess that he shot Teddy, or something like that. A very smart movie, but maybe not very realistic. Afterwards, I watched some other movie, but the strange thing was that I was still watching it like, I was watching Memento. I stayed in the Memento mode of thinking. Wierd.

Falling down the stairs

This afternoon, Andy fell down the stairs. It was around four o'clock when Li-Xia announced he had to drink something. He said he wanted to drink upstairs and started to go upstairs. Lately, he often goes up and down the stairs all by himself. When Li-Xia was heating his food, she suddenly hear him fall down. She found him sitting at the foot of the stairs with his head facing down. He did not cry. But also did not want to be touched. Li-Xia asked whether he had any pain. His face was quite dark. She carried him to the car seat that he uses at home and gave him something to drink. Then he started to cry. She phoned our G.P. and was told to bring him. The G.P. could not find anything wrong. We were asked to check him every two hours during the night.

This evening, Annabel and I biked to the University. The sky was clear and the temperature was about 13 degrees Celsius. We decided to bike along the Twekkelerzoom, a byclicle path along the railroad. It has no streetlights. We encountered several people without lights on their bike.

When we arrived, only Martijn was there. We first looked at the musical instruments. Someone had put in an another pen in the kind of spirograph and it had made some nice drawings. I played against Rudi who play against Taco simutanously. I got nine stones at the start and lost with 32 points. Not really bad. Marcel said I could have won if I would have attacked Rudi more. After about 20 moves, I had a quite strong position, but then allowed him to make small groups everwhere, while I did not make any points. In a certain way I felt quite relaxed playing against Rudi. Because he was also playing against Taco, I did not feel a very strong pressure to play quick, and several times I took ample time to consider my next move. Annabel played against Martijn and lost with 55 points. Martijn told me, she simply gave up a Ko-fight, when she encountered with it. Annabel and I, looked at the musical instruments, and I watched the second game between Rudi and Taco a little. Then Annabel started complaining that we should go home. She has a holiday this week, so she can stay up later. We biked the same road home.

Wallace and Gormit: The Curse of the Were-Rabbit

Today, Li-Xia, Annabel, and I went to the movie Wallace and Gormit: The Curse of the Were-Rabbit. One of the reasons why we went is because it was the last weekend that we could use our reduced price tickets. And also because Andy is away this weekend. I did not find it a very good movie. Of course, it is very clever how they made it. I had to laugh about some of the small jokes, but that is all. I did not hear much laughter during the movie anyway, but now there were not many people in the room. It seemed mostly kids with their (grand)parents.

It the past weeks the weather has been extremely warm. For today the temperature was the highest every measured on this day of the year. This is all caused by a warm flow of air from the France and Spain, caused by depressions on the atlantic ocean in combination with a high pressure field in the center of Europe. On of these depressions is the remnant of Wilma. This months interesting links
Home | September 2005 | November 2005 | Random memories