This evening, when I came home, I noticed that some buds of the Magnolia had opened. I could define this as that the Magnolia is blooming. Many of the white leaves of the buds have turned brown due to the cold and the snow of last weekend.

This morning, I came across the term "fluid intelligence" and I found a Visual Pattern Fluid Intelligence Test. I decided to take the test. For some of the questions, I was not sure about my answer, but when I finished the test, it appeared I had scored quit well. But in a sense the score did not really surprise me, because from earlier experiences, I had already expected that my "fluid" intelligence would be rather high.

This evening, Annabel and I went to the university to play Go. We were the first to arrive. Annabel wanted to play a 13x13 game on the middle of the 19x19 we had brought with us. We played with no handicap and she finally resigned the game. Then we agreed to play a 19x19 game, under the condition that I would not take too much time to think. We played quite fast and in the end I won with something like 30 points. While we played this game the other arrived. Next I asked Taco if he could give me some comments on a game I played on ItYourTurn. Huub also had arrived and we discussed the game. At the same time Annabel ordered some bitterballen. Next I played against Huub. And because we had not played against each other before, we decided to start equal, just to see how it would end. When I capture one of his groups he resigned and Annabel and I went how shortly after.

Today, I went to a soccer match of the team that Annabel belongs to. She is the only girl in this boys team. In the past week she did train twice with a girls team, but she felt like those girls could only run mindlessly after the ball. The weather was quite nice. It did get a little cloudy and we even had a few drops but the sun returned again. I felt that Annabel was quite actively running around the field. In the first half the other team made one goal. In the second half it looked like there was no go in team anymore. The other team scored another five goals. The trainer was very happy about how Annabel was playing. He feels she made a lot of progress since the start of the season and that she was playing very goal oriented. So he decided to give her a last-minute substitution. At first she did not understand why he wanted to substitute her, but when we started to clap she got the idea. Afterwards it became clear that the other team had "borrow" some players from a stronger team. The trainer said that it did not bother him so much that the team had lost, but felt that this had spoiled the day, because these strong player were simply dominating the game, and thus took away the opportunity for all the other players to learn something from the game.

Human rights in the Netherlands

The human rights situation in the Netherlands has been reviewed by the United Nations Human Rights Council. Some news announcement stated that Pakistan, Nigeria and Peru acted as supervisors. I do not know what is reason behind this choice, because to me it seems that the human rights situation in those countries is far worse than in the Netherlands. Especially in the first two countries, people are being prosecuted and discriminated because of their religious convictions and the governments of these countries have not done much to prevent this. (See for example, the persecution list of Open Doors.)

Today, Pakistan, represented by ambassador Masood Khan, and many other muslim countries called the Dutch government to prosecute Geert Wilders with respect to Fitna, suggesting that the movie was encouraging racism and xenofobia, and that it shocked the world. Deputy Justice Minister Nebahat Albayrak replied that the view of Wilders was not shared by the Dutch government, that the government is fighting against prejudice and promoting the freedom of religion, that the government is looking into possibilities for prosecuting Wilders, and that even Dutch muslims value the freedom of speech in the Netherlands. It seems that some members of the UNHRC are interpreting human rights differently than many western counties. Aricle 19 already warned that UN Human Rights Council Undermines Freedom of Expression.

This evening, I went to the university to play Go. (Annabel had to play a soccer match.) When I arrived, Taco was already there. I invited him for a game. We decided on a seven stone advantage for me. Not much later Rudi and Vincent showed up. Later Araldo also came and watched us playing. I lost with eleven points. Really not so bad.

Today, Andy came home with a painting that I found quite interesting. I took a picture of it.

In the Dutch television show "Het zesde zintuig" (The sixth sense) a number of candidates compete with each other to test their psychic powers. With most tests a jury gives point to the candidates. Of course, this is a very subjective way of ranking. But in the final test between the last two remaining candidates there were two sets of seven doors with behind these doors the fourteen candidates who had been eliminated before. Together with each set of seven doors, seven cards were given with the names and pictures of the candidates behind the doors. The two remaining candidates were given fifteen minutes to match the cards with the doors and they would get five points for each correct match. (The final episode was broadcasted on last Thurday. I did not watch it, but I did watch it this episode through the web site. This test starts at 33:06 into the show.) The one candidate who said that she was not good at these kind of things and who just put the cards at random on the doors, had one correct answer. The other who did use her psychic powers had zero correct answers. The host commented afterwards that this test was just a little joke.

Yesterday, I already wrote a small program to calculate the probabilities for the different outcomes. These are:

It is interesting to see that the probability to get one correct answer is slightly greater than zero correct answers. Also note that the probability that you have at least one correct is 63.28%. One could indeed conclude that the outcome of this test was rather dissapointing. Maybe it is not even fair that the lady who got one answer correct, got five points for this. The number of points should have increased with the number of correct answers. It is clearly that the outcome of this test does not provide any evidence of psychic powers being involved. The test involved a total of sixteen people who claim that they have such powers.

This evening, Annabel and I went to the university to play Go. We were the first to arrive, but Rudi arrived shortly after us. Annabel ordered some french fries and got a full plate for a good price. I asked Rudi for a game, and I got nine stone ahead. When Taco arrived he played against Annabel on our board but with stones that Rudi brought. Vincent arrived and watched us play, until Araldo arrived. Then it appeared that Rudi had only brought two sets of stones, so they started playing with our stones. When my game with Rudi had ended, I guessed that I was thirty points behind. Rudi thought that it was closer to twenty, but when we counted it was 47 against 77 points, exactly thirty points. Annabel lost her game with about 150 points. I wanted to go home, but Vincent and Araldo had not finished their game. I decided to copy their board on another board and the stones I had used to play against Rudi. When I was about ready, Rudi came to help me, because he had started a game (agains Taco, I guess) on our board. Then when every body agreed that I had copied it correctly, we swapped the boards, so that I could take our stones home.

This afternoon, there was a celebration because the school Andy attends existed for sixty years. Andy too had to perform with his class. He had to wear some nice clothes. Afterwards, I took a picture of him in front of our Magnolia in the backgarden.

Today, the weather was very nice. Li-Xia, Annabel, and I had agreed to have dinner at Camel at five o'clock as usual. Just before this, I went to bookshop De Slegte where I bought the Dutch book Zibaldone, which is a translated anthology by Frans van Doornen of Zibaldone di pensieri by Giacomo Leopardi. It was quite busy in the center of Enschede because of the 36th Batavierenrace that was being held. The Batavierenrace is the world largest (according the Guiness book of records) relay race in the world. When I was sitting on the sidewalk of Camel, I suddenly heard the voice of Erica Terpstra, the chairman of the Dutch Olympic Committee. It appeared that a restart would take place for the latest track at five o'clock. This track has to be completed by a man and a woman of the team. This was the women restart. A cannon was used to sound the restart. Li-Xia and Annabel arrived a little later, and while we were eating our dinner (the usual donner kebab, falafel, and fried potato slices) the men restart was done. The track was such that it would return along the start. We were surprised by the speed of the fastest runner, an African man. I guess it must have been Alan of US Handbal, a Kenyan. This team also had a female Kenyan for the last track with the name Peninah. I expect that both of them will also join the Enschede Marathon, which will take place tomorrow. 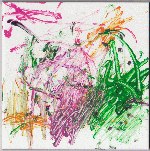 This evening, I scanned stone tile painted earlier this week by Andy. This months interesting links
Home | March 2008 | May 2008