Today, Li-Xia wanted to go biking and I thought it was a good idea because it is the tradition to go biking on this day. Some prefer to leave as early as possible. We left around ten. First we biked in the direction of Usselo and from there we went to Boekelo. Then we went to the Labyrinth of the senses, but because the entrance fee was € 11.50 we decided to continue. We heard the sound of the steam train traveling between Boekelo and Haaksbergen. We biked to the railroad crossing where we arrived just in time. I took a picture of the train on the crossing. We continued, and not much further I took a picture of the road going through the fields. We crossed the road from Enschede to Haaksbergen and then we arrived at point 46 of Fietsroutenetwerk Overijssel (biking routes in Overijssel). (The site does not contain information about the routes, but I found a RAR file with all the data in various formats including for Google Earth.) I tracked some route and we left in the direction of point 47 and from there to point 83. But we got lost and, as I already feared, we returned at point 46. I studied the map and plotted a route along the points 83, 76, 54, 77, 84, 79, 78, 81, 80, 41, 42, and from there home. We continued our route through fields, heath, peat, forests, and along lakes. Finally, we arrived at the German border and I made use of the restrooms at Ter Huurne, a strang combination of a restaurant, a shop, a gas station and an amusement park at the border with Germany. When we continued into Germany, it started to rain. We did have some drops before, but now it started to rain. When we came close to Haarmühle, I noticed that my back tire was rather soft. I was very busy at the Haarmühle, with music outside. We continued, but after 2.2 Km it was too soft to bike any further and we continued walking. After having walked 1.8 Km we saw some people standing outside a farm and when we walked closer we saw that it was a mother with her son. When we asked them if they had a pump, it appeared that one was standing right besides the bike of the son and before I could say anything, he was pumping my tire. We continued biking home and on the left a large thunderstorm was growing. I took a picture of the cloud. Twice I saw lightning strike down from the cloud. Near the Ruthbeek, I had to stop again, but luckily it was not so far anymore. Li-Xia, walked a little further, but as soon as she knew where we were, I told her to bike home. Just before I arrived at home, it started to rain. At home, I entered the route in Google Earth and measured that we biked somewhere between 45 and 48 Km.

Every week, I fill the Li-Xia's pill box with her pills and supplements. For two supplements I have to get 21 pills from the bottle. I have noticed that often it happens I exactly get 21 pills from the bottle before I put them in the box. This morning, I twice got exactly 21 pills even without trying. I am surprised about this ability to "counting" the pills when I pour them from the bottle in my hand without really counting them. I guess it is one of those wierd abilities that you develop as a care giver.

This evening, I went (alone) to the university to play Go. I was the first to arrive. For some days it has been quite warm and today it is the first official summer day (with a maximum temperature of 25.5 in the center of the country). After about 5 minutes Rudi arrived and we decided to play outside. I was given a nine stone advance. Taco and Araldo also arrived and started a game. At last Huub arrived and watch us play. At the end of the middle game, I started to make some stupid mistakes and lost two groups. When we counted, it appeared I had lost with 63 points. We analyze the game a little. Although I announced I was going to leave, I looked at the game between Taco and Araldo, and then sat down to watch the rest of the game, just like the others. When I came home, I checked how much I still could recall about the game and I came to about 40 moves. Li-Xia suggested that I should have taken a picture. I guess that if I had taken a picture, I probably would have been able to recall most of the game. I am surprised how easy this seems now.

The game of protein folding

This evening, I downloaded foldit, which is a game for protein folding. But it is also a method for using human brain power to solve protein folding problems, which is known to be a very hard problem. It is not so difficult to calculate the fitness of a certain folding, but a hard problem to find the folding with the best fitness. The game gives you a good insight in the factors that play a role in protein folding, but I had difficulties with solving the last puzzle which you have to finish before you can join in the competition. This gives me the impression that it is also a very hard problem for humans. The program also has some glitches. For some reason the update procedure that ran during the start-up of the program would not complete. I guess that this might be due to a busy server. The program also crashed one time.

We are having a hot Pentecost here in the Netherlands. It is a very early Pentecost, but nevertheless it is the hottest since 1985 with a maximum temperature of 26 degrees Celsius. We also happen to be the hottest place in Europe. In Spain the temperatures are much lower and they are having lots of rain. But sadly in many areas of Spain it has been so dry that the earth does not absorb the water so easy anymore.

In the past weeks, I have been working on solving the triangle tiles. Yesterday, I found a bug in the program for analyzing the square tiles. Many square tiles where marked as unsolvable due to a "strong component", but appeared to have a solution. I am still not sure about the results, but the current version of the program gives the following results: Of the 3 unsolved sets, it seems that two have a solution and that one has no solution. 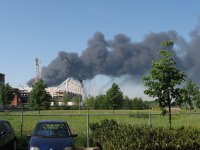 Today, it is eight years ago that Enschede was hit by the fireworks disaster. And again there were dark clouds visible in the sky as the result of a large fire at Rodepa Plastics. The fire spread to some other buildings around. Luckily the fire was consealed before noon. A salient detail is that the owner of the company had a depot just besides the fireworks factory that exploded.

Today, I discovered that some algorithm for determining "strong components" in my program for analyzing square tiles is not reliable. This leads to the following results: This is a serious setback which might not be easy to fix as there are now 53 unsolved sets.

This morning, I have been feeding Andy a slice of bread with Duo Penotti. At first he did not want to eat it, but then it went quite smooth and he finished two thirds. Because we heard lots of stories about him eating together with the other children, we decided to also give it a try at home and to make him eat more "normal" things.

This evening, I went alone to the university to play Go. I found Rudi and Taco outside. We talked for some time and then Rudi and Taco started their game, while I was looking and making remarks and asking some questions. At start of the middle game, Huub arrived and he asked me for a game. We decided to start equal. We played quite fast and in the end I he resigned. We continued a little further and when we counted the difference was about ninthy points. Then we went over to Rudi and Taco and saw how Rudi resigned. As some surprising things had happened on the board, he explained what had happened. Then we talked some while longer about all kinds of other Go related subjects, among the fact that rating in the Netherlands are getting lower.

Today, the movie First Knight was shown on BBC. The following scene from the movie occurs short after King Arthur has found Lancelot and Guinevere passionately kiss each other goodbey:

This evening, I went alone to the university to play Go. When I arrived, Araldo and Taco already were playing. They both had brought a set, just as I did, because Rudi had mailed us that he would come later. I too had brought a set, but I did not use it, because nobody else showed up. I just watched the game between them. I was just one big fight, which I found hard to follow. There were a lot of people in the bar, also a lot of German speaking people.

This morning, I went to city and I went to bookshop "De Slegte". In the past weeks, I had been looking at some books that I wanted to buy, but every time I hesitated. Today, I bought at 11:57: This months interesting links
Home | April 2008 | June 2008