Today, the highest temperature measured at Twenthe weather station was 29.4 degrees Celsius with the humidity around 45 degrees. This is the result of a persistent high presure system which is sending us warm air from central Europe. In the evening, it was still around 24 degrees Celsius. The past May has been the hottest in hunderd years with an average temperature of 15.7 degrees Celsius whereas 12.7 degrees is normal.

Today, a new fences were installed on both sides of our back garden. Two of the three chestnut trees were extremely pruned by the workmen. I already had expected that this would happen as these trees were very close to the fence and the space was rather narrow.

This evening, Annabel and I went to the university to play Go. When we arrived, Taco and Araldo had just decided to play a game. Annabel and I decided to play. First she wanted to play on a 13x13 board, but I convinced her to play on our 19x19 board. The first game she was given 5 stones ahead and she won with 50 points. The second game she was given three stones ahead, and I resigned quite soon, because I was messing up thing pretty well. For the last game she was given only two stones ahead. I won this game with 17 point and only because I managed to kill a group of her, otherwise she would have clearly won. (Annabel snapped some pictures when I cleaned up the stones.) In the mean time, Rudi and Huub had arrived as well. Rudi watched the game between Taco and Araldo and Huub watched us playing. 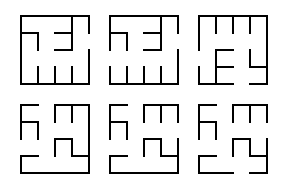 1-3-4 mazes are square mazes where each room has either one, three, or four exists. There is thus no room with two exits. With the building blocks shown on the right it is possible to construct these kinds of mazes where both sides are a multiple of four. You just take an arbitrary maze, with rooms with any number of exists and replace each room with one of the building blocks, rotated or mirrored if needed. When I was in highschool, I already developed a similar proof for multiples of five.

This evening, Annabel, Li-Xia, and I watched the soccer game between the Italian and the Dutch soccer teams as part of the European Championships. The Dutch team plays very strong and are in control of the game. The make two goals in the first half of the game. In the second half it seems as if the Italian team is fighting back, and Edwin van de Sar has to stop some goals, but the Dutch team makes another goal. The Dutch have defeated the current world soccer championship Italy, who have never before lost a game with such a score during any previous European Championship game.

I wrote a program to calculate all the 5 by 5 1-3-4 mazes. This program produces this output in which there are 386 different solution, not taking in account symmetries. Some of the solutions are internally equivalent and only differ with respect to external exits. With respect to the external exits there are six different types: crossing (with four exits), T-shape (with three exits), straight (with two exits), L-shape (with two exits), dead-end (with one exit), and none (with no exits). There are 257 internally equivalent shapes. The distribution is according the following table. The capitals in the first column refer to the different types. If a capital occurs twice, it means that there are two different possibilities to place the exits according to the type.
(The 'totals' column does not include the count of the '#' column.)

This evening, Annabel and I followed the soccer match between France and the Netherlands. Early in the game, the Dutch team scored their first goal, but then they did not play as strong as in their match against Italy last Monday. But in the second half they started to play stronger and the defeated France, who won the second place in the 2006 World Championships, with the score of 4-1. This means that the Netherlands is the winner of Group C of UEFA Euro 2008, no mather what will be the outcome of the last match against Romania. They don't plan on letting Romania win, which would kick both Italy and France out of the tournament, because they want to win every game.

This evening the two final games of group C of UEFA Euro 2008 were played. These were between the Netherlands and Romania, and between Italy and France. The Dutch already had qualified for the quarter-finals. Which other country would qualify depended on the following rules (as found on the wikipedia page of this afternoon):

Or in a more algorithmic way:

Or to make life easier, just fill in the score:

During the evening, it was Italy who scored first, which caused them to qualify. As long as no goals were made, Romania was going to qualified. In the end both Italy and the Netherlands won with 2-0, and there was no single moment in which Italy lost their qualification.

This evening, Li-Xia and I biked to the university. We arrived there around twenty past eight. When it was about a quarter to nine, we agreed that I would order some tea and that we would go home, when I had finished it. (Li-Xia did not want do drink something.) Just five minutes later Taco arrived and we started a game of Go where I got seven stones ahead. Not much later Rudi and Huub also arrived and the started to follow our game. When Huub took a picture, I decided to follow his example, so that I could recall the moves alter on. (Last picture) As usual, I lost some points in the end game, and the final outcome was 63 to 62 in favour of Taco. Not much later, Li-Xia and I took a very relaxed bike trip home. At home I started to reconstruct the game using the pictures. That worked quite well, except for some parts where I had be messing around a bit. The results can be seen in this PostScript file (PostScript to PDF converter) and this SGF file.

The Netherlands defeated by Hiddink

This evening, on the longest day of the year, the Dutch soccer team was defeated by the Russian national team coached by the Dutch Guus Hiddink. Everybody agrees that the victory of Russia was well deserved, because the Russian team was simply playing much better. It was also clear that the magic that caused the Dutch team to defeat both Italy and France before, had totally gone. Only after they were one point behind, it returned a little. Some are saying that the magic was lost because Van Basten started with a very different selection in the game against Romania. Others blame Rafael van der Vaart for wanting to control the game too much. There were more than 100,000 Dutch fans in Basel were the game was played. Now all the orange decorations in the streets can be removed again.

Just a little before three o'clock, one could hear an almost continues rumbing sound outside. The sky was not that dark at all. To the East you could even see some small patches of blue sky, but on the West the sky was much darker. Faint flashes could be seen. Short after three o'clock it started to rain very heavy. About 20 minutes later it was over, but the alley behind our house was flooded with about 5 cm (2 inches) of water. When I checked www.buienradar.nl, it became clear that this was a very big thunderstorm (rainfall and with thunder). Later on, I heard that hailstones the size of ping-pong balls had caused heavy damage in some areas covered by this thunderstorm. In some places the strong winds caused by the thunderstorm have uprooted many trees.

Some organisation called The Messenger of Allah Unites Us in Jordania is thinking about starting a court case against the Dutch politician Geert Wilders, because of his film called Fitna. This could imply that a Jordanian court might issue an international warrant for him. The Netherlands does not have an criminal exchange treaty with Jordania, so there is no change that they will request his extradition.

These days there was also news that two Dutch companies, Friesland Foods and Zwanenberg Food Group, have publish a large advertisment in some Jordanian newspapers to ward of a boycot of there products. In this advertisement they state that they do not agree with the contents of the Fitna film and that they support The Messenger of Allah Unites Us in there quest for international laws against insulting religions. The brands of these companies are: Zwan, Zwanenberg, Linera, Kips, Limco, Hooymans, Offerman, Huls, Appelsientje, Bonnet Rouge, Chocomel, Completa, Coolbest, Debic, Domo, Dots, DubbelFriss, Dutch Lady, Extran, Foremost, Frico, Friesche Vlag, Frisian Flag, Friso, Fristi, Kievit, Milli, Noy Noy, Peak, PöttyUos, and Rainbow. If you support the freedom of speech, you might want to avoid these products.

This evening, I went to the university to play Go. I arrived at the same time as Taco, but because we play against each other we decided to wait. Not much later Rudi arrived, and he and Taco started a game. After about ten moves, Araldo arrived, and we decided to play with me given five stones ahead. I was doing quite well until at the end of the game I missed a trick move and lost a lot of stones. First I wanted to resign, but then we decided to continue, just to see how much I had been ahead. I lost with 37 against 48 points. We concluded that I was at least ten points ahead before I fell for his trick move. This months interesting links
Home | May 2008 | July 2008