This evening, for the first time after the summer holidays, I went to the university to play Go. I was the first to arrive but I did not have to wait long. I played against Jan-Willem for the first time in a very long time. We agreed on a five stone handicap for him. After an interesting fight, I resigned. 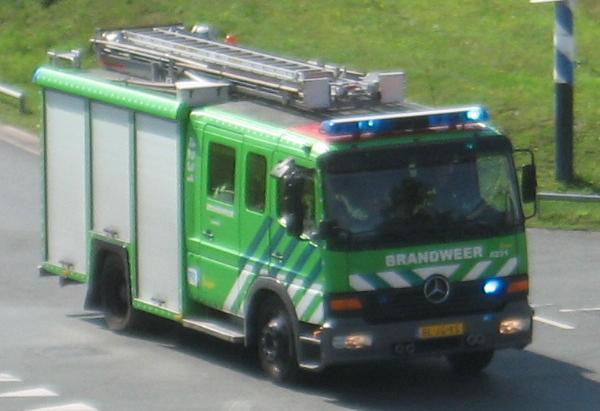 The other day, I read in a local news paper that our city got a green firetruck. This afternoon we heard some siren and when we looked outside, we saw the green firetruck approaching. I quickly took a picture.

This evening, I again went alone the university to play Go. I was the first to arrive, but Rudi and Taco followed soon. We waited for sometime and then decided that Rudi would play against both of us. I played with a nine stone handicap. Right at the start, I lost some stones in the bottom left corner (from my side). But during the rest of the game, I did not suffer any big losses. When we counted it appeared that I had won with 65 against 61 points, and Rudi congratulated me with my victory. If I am not mistaken, this is the first time I won from him. I stayed some time and followed the ongoing game between Rudi and Taco. When they were finished we discussed some questions I raised about the game I played against Rudi.

This afternoon, I spend some time pruning the willow. (The previous time we pruned it was on March 15, 2007.) In the past week, I already did some pruning, just to fill our green garbage container. This afternoon, the sun was shining, and I was not sure whether would be another nice day to do the pruning. Li-Xia also wanted us to finish the job, so I decided to do the pruning. This time it took a little more than 20 minutes to break off all the new grown branches, because they had been growing for two seasons. Li-Xia took care of cleaning away all the branches. Annabel took a picture.) I also decided to saw some of the old branches with a simple saw. I was some effort, but after some time, I figured out how to do it.

This evening, I attended a soccer match between the team where Annabel belong to and a team from F.C. Twente. All parents were asked to watch the game so that we could become acquainted. After our team scored the first goal in (about) the third minute, and that set the tone for the game. The final score (after two times 35 minutes play-time) was 21-0. But Annabel felt that the victory was not well deserved. There is one boy in her team which recently joined their soccer club Victoria'28, who was placed in her team but who should realy play in a higher team. And she also felt that they did play together very well. Many goals were the result of a one-man action. (An action shot)

When we came home Annabel made Li-Xia guess the outcome of the game and in the end she told it. About five minutes later I overheard Li-Xia make some inquiries about the result of the game. (Of course, this is the result of Alzheimer's Disease.)

This afternoon, Li-Xia, Annabel, Andy, and I went in to the city. We went various shops and I took Andy to the McDonanlds where he ate about half a hamburger. I finished the rest of the happy meal. He got a R2-D2 toy with his happy meal that he was very fond off. He kept on asking about its name. On the square around and inside the old church in the city center the Gogbot festival is held. We walked along two huge Tesla Coils, and I immediately realize that these were going to be used to make music. When we came back from our dinner they were testing the system and playing a song on the Tesla Coils. Of course, by daily light the sparks were not very exciting. At home I discovered that this was the first performance of ArcAttack in the Netherlands. In the evening I went back to watch it again. When I arrived there was some music was being performed on a small stage just South of the church. It was not my type of music and also very loud. Even from the distance from which I was watching it, it was almost hurting my ears. The people standing close to the stage must have been deaf. I recorded some movies with my camera and also took some pictures (a part of one of these pictures). I also went inside the old church and watched The Special Player by Outside Standing Level. This months interesting links
Home | August 2008 | October 2008 | Random memories