Yesterday, I have spend some time experimenting with the SDU parameter for optimizing a network connection with an Oracle database. I was adviced to increase the value of this parameter to 32768. But somewhere I also read that the value of SDU should not be higher than the MDU. Using ping, I discovered that the value for MTU for the connection I am using is 1500 and that the effective maximum data load is 1472 (that is 1500 minus the 28 bytes needed for the IP/ICMP headers). Whenever you want to send a data package larger than 1472 it is going to framented, e.g. split in more than one package. I also found this note by Steve Adams, which suggests that because some additional headers that are used by the SQL*Net protocol, the value of SDU should even be smaller than MTU. He arrives at the number of 1450 bytes, where he calculates that the MTU is 1476, which is four more than the value that I arrived at.

But when I searched Oracle, I found this "Oracle Net best practices" PDF, which claims that SDU and MTU are independent. The document does not mention TDU at all. I guess that the above mentioned remarks are based on out-dated facts. I spend some time studying the following documents: sqlnet.ora documentation, tnsnames.ora documentation, listener.ora documentation, and Chapter 14: Optimizing Performance of the Database Net Services Administrator's Guide. It is always a whole search to find out how these kind of things work, and a simple internet search does not always return the correct answers.

This evening, I went to the university to play Go. But before I arrived at the campus and also on the campus, I saw many traffic wardens along the roads, because of an important soccer match in Grolsh Veste. Before I went into the building, I asked when one of the wardens when the match over, and he told me that it was half past ten. I decided to leave for home before that time. Taco arrived at the same time as I, and we decided to play with a seven stone handicap for him. About half way the game, Araldo arrived, and watched us playing. After the 117th move, I resigned. We replayed and analyzed the game. Taco felt that I played less solid than normal. I guess, I am playing more agressive. In a sense, I think this is good, because I feel that often playing too passive. Although I lost the game, I feel that I did learn something. I left around a quarter past ten. From the cheering it was obvious that FC Twente was winning the games. When I arrived at home and the game was over, I could even hear the cheering from our back garden. It is 4,310 meter from our back garden to the center of the soccer field. FC Twente won with 2-1 from Schalke 04. At home I reconstructed the game record of the game I played against Taco. It went quite easy, also because it only had 117 moves.

This morning, Li-Xia asked me if I could show her the Bouwhuislaan where Andy goes because some weeks ago she could not find it, and we also had to return something there. The weather looked nice and we left around a quarter to two. First we went to some shop to order some Curmaxell from Springfield. Next we biked to the Bouwhuislaan and after returning the item, we biked to the Medialab in the Tetem II building to have a look at the Nemo Observatorium by Lawrence Malstaf. First I went inside, and next Li-Xia gave it a try. I took some pictures (the first). Finally, I went in again, and took some pictures from the inside (part of one of the pictures). Next we went to the center of the ciry and parked our bikes with bookshop De Slegte, but we first went to bookshop Broekhuis. We went to the third floor and had looked at the kunstbBende exhibition of works by seventeen employees of the bookshop. I found a pen drawing of a railroad crossing quite interesting. Next we went to the second floor, where I selected the Book by Book diary (picture) from Bekking & Blitz Publishers. Li-Xia felt a little sick and wanted to wait outside while I looked at some books. After this we also visited De Slegte together. And we also went to bookshop Kruimeltje, which was the first time for her. We looked at some other shops and arrived at quarter to five at Camel where we had an appointment at five with Annabel for dinner. She promptly arrived and we ordered some Donner Kebab and Falafel. Afterwards we went to a supermarket for some shoppings. 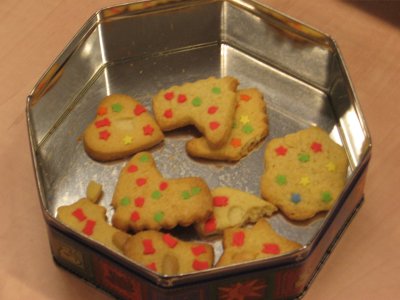 Lately, Annabel has grown an interest in baking cookies. Last Sunday, she bought some utensils and also some decorative sweets. Today, I brought some cookies with me to the office that she made yesterday together with Li-Xia. 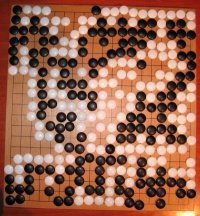 This evening, I went to the university to play Go. I brought some cookies from Annabel with me. It was soon decided that Rudi would play against Taco and me simulateously. Rudi and I agreed on a handicap of eight stones for him. He played tengen, that is exactly in the center of the board. Tengen means center or origin of heaven in Japanese. I cannot recall, he played this move, as his first move, while playing against me. At first I did not worry about it, but soon I realized its power. Before I got into the middle game, I had spend more than twenty points to create a living group with two points. Before counting, I took a picture of the board. I finally lost with 30 against 9. We replayed our game and analyzed it. At home I spend some time reconstructing the game record.

Sometimes, it happens that I have to fix some error (usually a spelling error) in many files. Today, I decided to write a small program for doing this. The idea is that you use grep with the -n switch and redirect the output to a file. You open the file in an editor fix all the errors and call multifilefix and pipe the file into it, and if you want to really apply the changes use the -sure switch (otherwise, it simply displays what it would have changed).

The Way of Go

Today, I finished reading The Way of Go by Troy Anderson, which I started reading on November 27 when I bought it that same day at 12:45:53 from bookshop "De Slegte" for € 12. The book is about the game of Go and it is not. The rules are only explained in the appendix, and I have to admit, it is one of the best introductions that I have seen so far. The books talks about strategical principles applied to business and life, which he derived from the game of Go, because it is a game in which strategy plays such an important role. At some points I found the book a little long-winded. I think that the book could possibly be reduced to half of its size, if he would have focused more on the great stories he has to tell. In some chapters these stories are spread out over the whole chapter. Nevertheless, it is a very interesting book, because not many books talk about strategical thinking.

Early today, I finished reading the book Twee Vrouwen (Two Women) by Harry Mulisch which I started reading yesterday. On Christmas day, I got the book from my mother who again got it for free from the library. I read the book for the first time in February 1978. I was attracted to this book after seeing the movie the movie Twice a Woman some months ago. I really found this to be a very beautiful, truely literary work.

This morning, I finished reading the book Blauwe Maandagen (Blue Mondays) by Arnon Grunberg, which I started reading on December 14 after buying the book on November 2. This book started much like his later book Figuranten. The third part of the book, called Dancing like an Egyptian, made an impression about it, because it was about his father who had become demented due to cerebral haemorrhage or infarction. But after that, in the last two parts of the book, I felt that the book was going down-hill, and I only finished it because I already had come that far reading it, and I was hoping that it would end in some positive turn. It was about drinking alcohol and escort girls. If this book is really that autobiographic as it seems to be, than Grunberg went through a rather dark periode in his life.

Today, I bought a bottle of Resveratrol Extra Forte from Reformhuis Twente, which we had ordered yesterday. Resveratrol is a component from red wine, which seems to be responsable for the positive health effects. It is also said to work against Herpes Simplex, een virus that has been linked with with Alzheimer's Disease. Last week we also added L-Lysine to the supplements that Li-Xia takes every day. This months interesting links
Home | November 2008 | January 2009 | Random memories