This afternoon, around 16:20, I placed two of our computers, andy and a Compaq LTE 5000 laptop, in a sea container with other electronic equipment at the waste disposal center South in Enschede.

I went to bookshop De Slegte and, at 12:21, I bought three books that where on sale. I love book sales, because it makes you look at books that you otherwise would not have looked at. The books I bought are:

I finished reading the last book. 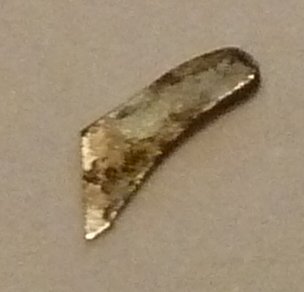 This morning, I found a piece of metal in the back tire of my bike, which is the likely cause of a flat tire that required me to walk home yesterday from the office. It looks like me to be a piece of a "snap-off blade" utility knife. I have no idea how it got in my tire. It is about 4mm (1/6 inch) long, although it might look larger in the picture on the right. 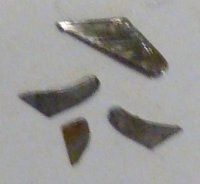 When I arrived at the office yesterday, I noticed that my front tire was getting flat. My boss was so friendly to give me a ride home in the evening. This morning, I inspected the tire and found two pieces of metal, of which one had caused a puncture. Yesterday, I also had found another piece of metal, after I reported having found one. On the right a picture of all the pieces I found so far.

Tonight, I finished reading the Dutch translation of Last seen in Lhasa by Claire Scobie, which I started reading on last Sunday, after I bought the book last Saturday. The fact that I finished the book so quickly shows that it made a great impression on me. The book is about the travels the author made through Tibet with a strong focus on the friendship she developed with a Buddhist wandering nun called Ani. The book also shows how Tibetian Buddhism is slowly dissappearing and many (secret) teachings are no longer passed on. Even the Tibetian language is slowly being replaced by Mandrin Chinese, and with this knowledge about Tibatian "religious language" and classical religious texts is disappearing as well. Although I am not a Buddhist, the idea of this makes me sad. In a way I respect a nun like Ani, who travels the country as a pelgrim and meditates in caves like a hermit. She seems to be a free spirit, free to go where she wants, but still she has a lama (a guru) who she visits every year for counsel. Then also why should you escape the sufferings of daily life (which is harsh in Tibet) to endure all kinds of hardships (such as living in cold caves under) only to spend time meditating? Is meditation indeed necessary to become enlighted, to escape the wheel of karma (as Buddhist say)? And is it in a sense not very egoistic to seek enlightenment for yourself? Yes, she seeks compassion, yet she often lives as a hermit instead of taking care for others.

This evening, just like every other evening, I was reading to Andy from one of the reports of the weekend and holiday care that he attends. Today, I was reading from Monday, July 12, 2010. When I was about half way the report, Andy suddenly shouted: "Where is Jelle" (Jelle is a Dutch boy name). I had not read about Jelle being at the care, but it often happens that children come and go. Knowing Andy's excellent autobiographical memory, I expected that the name of Jelle would come up. And yes, indeed it did, suddenly he was mentioned in the evening. I asked Andy when Jelle had arrived. He immediately answered: 12 o'clock (at noon time) with a big smile. It would not surprise me if he is absolutely right. Now it must be the case that I have read this report before in the time in between, but it still it is a remarkable feat for any person to remember this kind of detail. Andy (now 14) is always very keen on noticing who is present and not. He is the one who immediately notices when someone is missing. During the breaks at school he will often walk up to the teacher of another class to ask where this and this child is, if the child is not present. I wonder if these kind of remarkable (almost Savant like) skills are common among people with Kabuki Syndrome.

Today is the first day of the year of the dragon according to the Chinese calendar. The spring festival has begun.

At bookshop De Slegte they were selling all the books that were on sale for just one Euro each. At 12:47, I bought the following books (in random order):

Of the last book, they had still five in store. Only two had a drawing that I liked. I think I will cut one of the books (I already bought one three weeks ago) in loose sheets and give away the other. Of course, I keep the drawings. The seller told me that they never sold one of the books for the price of € 20.

This evening, a thin layer of snow fell on the ground. Now more snow has been predicted and the prediction says temperatures are going to be low the coming week.

Last week they started to install drainage for a natural well along Hendrik Ter Kuilestraat in Enschede. I reported about some natural wells on Tuesday, April 7, 2009. I made mentioning of three natural wells. In the mean time two of these wells seem to have dried-up. I guess that the three wells have a common source, and that the newest well (which occured after reconstruction of the road crossing with Kanaalstraat) has caused the two older wells to dry-up. In the past years the new well (picture) has been causing a lot of problems and several times have seen some ground work taking place along this area, possibly trying to find a 'leak'. I guess that they finally have realized that it is a natural well and that installing drainage is the only solution.