This evening, I spend some time comparing images with respect to Komputerstrukturen 1 by Peter Struycken. A reproduction of this work of art is included in P. Struycken komputerstrukturen (1970) on page 11. This exact reproduction is also found in Recente schilderijen (1970) on page 2 and with an article in magazine Vrij Nederland from January 21, 1970. P. Struycken (2007) on page 108 also contains a reproduction of this work, but it differs at six places. Knowing that the reproductions in the first catalogue contains many errors, I presume that this last reproduction is the most accurate. The other productions have the following differences compared with this: However, there is one odd combination of four squares in both reproductions. It is found at row 29, column 31 where there is a black square resulting in the only code 31 combination of four squares. Maybe this black square should have occured one lower or one higher. If this is the case, it is the first error made in this series of paintings that I have found so far.

I spend some time comparing images with respect to Komputerstrukturen 2 and 2a by Peter Struycken. Quite possible they are both made with the same receipt using the OSTRC program, namely the four possibilities to fill a square of four little squares with three white and one black square in an equal distribution. It is quite remarkable that both do not have an occurance of four little black squares touching each other. The chance for such a pattern is 1 out of 256. Each work contains 576 candidate patterns, so one would expect on average a little more than two of them in each randomly generated work. A simulation of one million works returns the following percentages for the number of occurences rounded to two digit after the decimal point: This shows that only one out of ten randomly generated works would not have any four little black squares together. This strongly suggests that Struycken picked two without this pattern or that he did modify them by removing the pattern by hand.

At 14:01, I bought the book Een (nieuwe) geschiedenis van de filosofie (A (new) history of philosophy) by Jan Bor, ISBN:9789035135888, from bookshop Broekhuis for € 6.90 (original price € 19.95). There were some birthday decorations in the shop because the bookshop opened 145 years ago. I heard that it was not sure where they would celebrate it next year, because they have decided to go to another location, because the building is getting too old.

I spend some time comparing images with respect to Komputerstrukturen 3 and 3a by Peter Struycken. Quite possible they are both made with the same receipt using the OSTRC program, namely the three possibilities to fill a square of four little squares with two white and one two square in an equal distribution.

The only reproduction I have found of Komputerstrukturen 3 is in Recente schilderijen (1970). In the second column (of two by two squares) there are three squares with only one black little square. It is likely that this is an error in the reproduction.

Today is the first day of the year of the snake according to the Chinese calendar. The spring festival has begun.

In the past days we had some snow during the night. Last evening it started to snow. This morning there was almost 3 cm of snow on the table in the garden, but on a lot of places there was no snow on the ground at all, because of the ground being not cold enough. In the afternoon, we traveled to Almere, where it was said that 15 cm of snow fell. I did not measure it, but it could well have been 15 cm.

Apraxia always has been on the foreground with Li-Xia's Alzheimer's Disease. Already three years ago she had problems with signing and writing in Chinese. About a year ago, I already noticed that Li-Xia was using her left hand in a way that would suggest left-handedness. Of course, it is possible that this is due to an asymmetric progression of her disease, but it is also possible that she is left-handed by birth and has been forced to be right-handed, which is still a very strong practice in China. Eating with your left hand is considered as bad habit and there is a strong believe that it is impossible to write Chinese with your left hand due to the strickt order in which the individual strokes of a Chinese character are written. (I just tried to see if I could write my Chinese name with my left hand, and I managed to do it.) Today, I thought that apraxia might be related to the forced right-handedness. I did an internet search, but could not find any information about this. 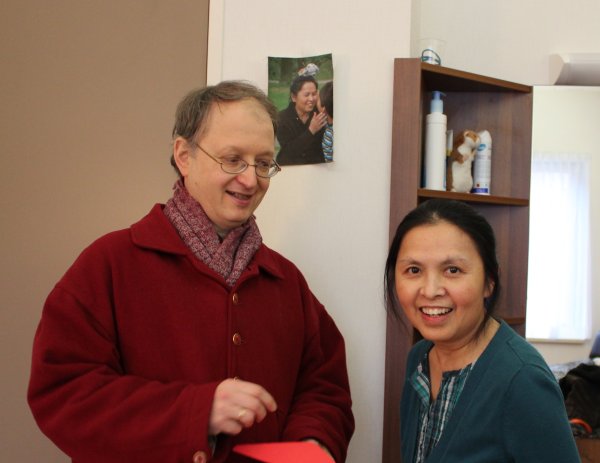 Today, Annabel and I visited Li-Xia because of Valentine's day and because it is two years ago that she came to the nursing home. Annabel took two short movies with her camera. In the second Li-Xia talked to herself while looking in the mirror. Although, I can say some simple sentences in Chinese, I cannot understand much of it. An old Chinese friend of Li-Xia provided some translation.

When Li-Xia walked to me, I said: "Li-Xia, You are my wife" (I don't use the formal term for wife, but the informal expression: lover.) Next I twice told her: "I love you very much!" and asked her: "Are you my wife?". Li-Xia responded with: "Go away!", not because she is angry but because she felt embarrassed. I continued with asking her: "Am I your husband?".
Li-Xia walked over to the mirror and asked herself quietly in Chinese: "Is he (my husband)?", "Can he see me?", "I can't remember it.", "Yes, it's him". Then she babbled something meaningless to herself. Annabel and I thought that she is counting, so I said: "One, two, three, four, five, six, eight, seven". Notice that I said "eight" before "seven". I always make this mistake when I count in Chinese. Li-Xia laughed and said quietly: "Can't count." Then she said to camera: "Yes, it is him."

I was a little surprised to discover that she is talking aloud to herself. It shows that she still recognizes me and knows who I am. This made me very happy.

In the afternoon, it started to snow. At the end of the evening, there is about 1 cm of snow. In some other parts of the country more snow fell. With the rising temperatures it is not going to stay for a long time. Tomorrow most of it will be gone. 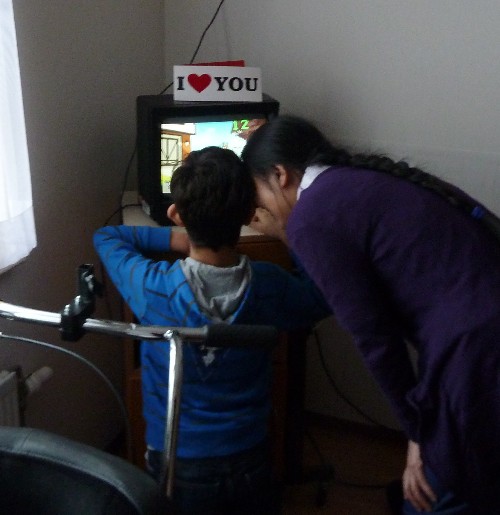 In the afternoon, I visited Li-Xia and took Andy with me. He immediately started watching TV in the bedroom of Li-Xia. I stayed with them. Several times, I noticed that Li-Xia was bending over to Andy in an attempt to make contact with him, but he just continued watching TV. I took several pictures, because I found it quite touching.

This evening, I went to the university to play Go. The first to arrive after me was Rudi. I talked a little with him until Taco arrived. I watched them play their game until Huub arrived. I play against Huub starting with two black stones, because he estimates his rate at 9 Kyu and I mine at 11 Kyu based on the latest tournament outcomes. But still I lost with 37 against 54 points. Especially in the opening, I made some mistakes, like giving away one corner and allowing two weak groups to appear.

Today, the book Stanley Kubrick's Napoleon: The Greatest Movie Never Made by Alison Castle, ISBN:9783836523356, arrived. I ordered it the day before yesterday from the website of De Slegte for € 20.00 and € 2,90 transport costs. Here in Enschede the book is still sold for nearly 50 Euro. I guess that this one shop I got it from, has put it on sale. Second hand copies cost around 30 Euro, so I think I made a good deal. I have considered buying this massive book for a long time. It weighs (on our kitchen scales) 4438 gram and the dimensions are 21,1 x 34,4 x 7,6 cm and it has 1112 pages. This probably makes it the biggest and heaviest book in my collection. I don't think I will ever read this whole book.

This morning, there was a little (broken) layer of snow on the ground, and there were some snow flakes falling from the sky. Later in the morning, there was some more snow, but because of rising temperatures, not much was left by the end of the afternoon.

This morning, I measured 6 cm of snow on the table in our garden. It fell during the night. During the day, there were some more episodes with snow, nevertheless at the end of the afternoon, I only measured 5 cm of snow, which can only be explained by some melting having occured. Temperatures are expected rise, and the snow will probably be gone soon. This months interesting links
Home | January 2013 | March 2013 | Random memories