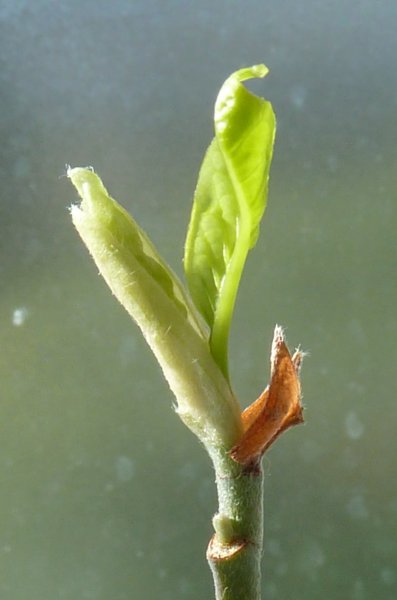 This morning, the bud of the little magnolia plant has opened. I took a picture of it in the sun.

Yesterday, I discovered that the local charity shop Het Goed carries a rather large and reasonable good collection of secondhand books for rather good prices. This afternoon, at 15:35, I bought the book Steve Jobs: de biografie by Walter Isaacson for € 2.00 (including a € 0.50 tip). 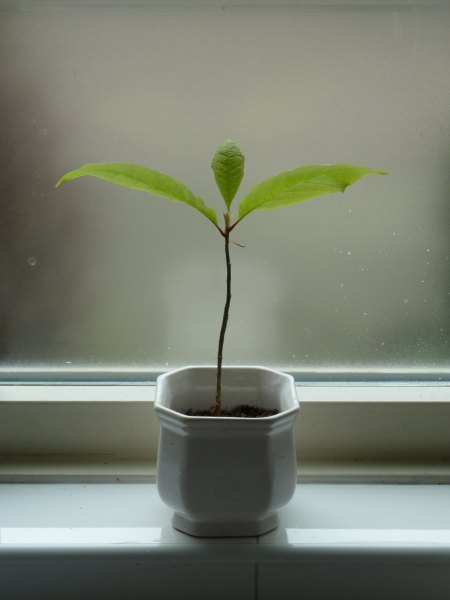 Our magnolia plant now has three leaves and more are coming. 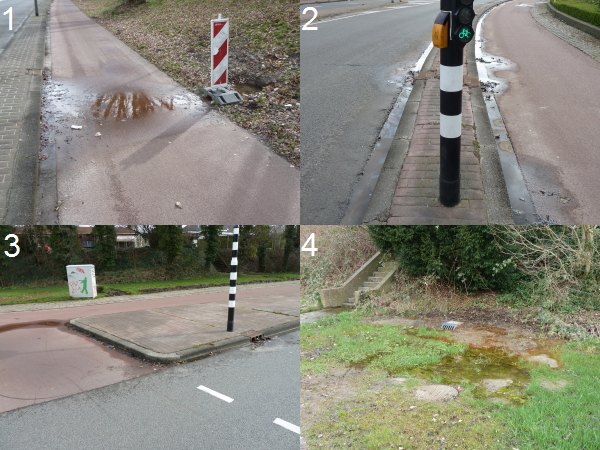 This morning, I took pictures of the four places where water from natural is often flowing. Recently, a new place has appeared along the byclicle path. (See number 1 on the picture on the right.) They dug some hole beside the path that is now filled up with water. Three years ago they installed some drainage from about this spot till even a little further than the traffic lights for the bikes to cross the road (see number 2), but it seems that for some reason it is not working anymore. Near the traffic light and across the road there is often water flowing. A little further (number 4) there is a place where water is also welling up. This is one of the old places where the water was coming out of the ground. Two other places a little further along the road (that I reported about on April 7, 2009) seem to have dried up. In the past year some ground work has been performed in the area to replace the existing sewer drains.

New languages are invented all the time in the field of software engineering. Most of these languages are just a variation on existing languages reusing existing concepts in new combinations. Recently, I got the idea for introducing a filter concept that processes a stream of data into another form. (Can imagine that I am the first one to get this idea, but I do not know of a language that uses it.) I would like to use the UTF-8 decoding as an example, that takes a stream of bytes values and turn them into Unicode code points. In progamming languages, filters are implemented as pull or push algorithms. In the pull algorithm you implement some function or method that from a stream of bytes, retrieves the next Unicode character (code point), while in the push algorithm you implement a function or method that you feed bytes and that emits a Unicode (code point) to a file or appends it to the end of a string. The specification of a filter should be such that it is agnostic to the pull or push implementation and the language should have constructs where the use of the filter automatically implements the pull or push algorithm. Below the specification of the example filter in an extension of C++ that uses new keywords filter, consume, and emit.

I have not thought yet about syntax constructs for using the filter. The language should at least have an iterator concept (for the pull algorithm), a stream concept (for the push algorithm), and/or have pipe statements like in most Unix shells. In the above filter specification there are also a number of error conditions that can occur. Because there are many ways with dealing with errors, the error handling might depend on the context in which the filter is being used. Ideally, one would have some mechanism to specify the error handling at the place where the filter is used. I recently, implemented the push algorithm in a C++ class in the following manner, when working on new version of IParse:

At 9:47, I bought the book Frida Vogels. Dagboek 1970-1971 by Frida Vogels for € 14.95 from bookshop Broekhuis. Most of the time it takes me a long time to consider to buy a book, mostly ending up not buying the book, and at other times, it takes me a few seconds to decided. I have a weakness for diaries and (auto)biographic works. This months interesting links
Home | Februari 2015 | April 2015 | Random memories