Today, I bought a SATA cable (combined with power cable) and an USB stick. In the evening, I used the SATA cable to properly installed the extra ('clean') hard disk (identified as HD322HJ) in johan. In the past days I used the cables of the DVD drive, and I reattached those again. I booted it from the old drive, first disconnected from the internet, and later also connected. I installed Mircosoft Standalone System Sweeper on the USB drive and used it to scan my notebook, FJF. I could not scan lixia, because it could not boot from a USB stick. I also downloaded Ubuntu and created a live CD. I tested this on johan and lixia. It worked okay.

I found out some interesting developments with respect to the game Symple. I already had heard about a rule change, where it is no longer allowed to pass at the end of the game, forcing you to create a new group when you cannot extend any of your groups. This creates 'drama' in the end game and also changes the middle game. On July 13, 2011, I wrote about the challenge to write a program that could play Symple. I have read that Marcel Vlastuin wrote a Symple bot, which uses MCTS, and appears to be rather strong. That could mean several things, that there are no really strong players yet or that maybe afterall it is not a very difficult game to program. I also think that the new rule with respect to not allowing to pass, maybe favours programs, at least at the moment when the tactics of the end game are not yet very developed.

This evening, I tried out VisualSFM, a structure from motion application on my set of plant pictures. It did not work very well, because the feature matching did not work very well (see this example image). It seems that the program does not have the ability to do manual feature matching, or at least a possibility to clean-up incorrect matches between pair of images. The application seems to have a lot of options and functionality, but it is not all clear to me how it should be used. Another interesting fact about this program is that is uses the graphic processor on the graphics card for some of the algorithms.

This evening, I went to see the movie Extremely Loud & Incredibly Close, which is based on the book with the same title. When I watched the movie there where many things I did not remember from the book. I am still not sure that this is because the plot is different from the book, or because I simply forgot those part, or even did not grasp fully when I read them. I did look at the book, and I now know that there are some differences, but nevertheless, I think it was a good adaptation of the book. I fully enjoyed the movie, and was a little surprised about some of the negative reviews. I already searched the internet for the screenplay in order to compare it with the book.

Today, when I visited gallery "Beeld & Aambeeld", I learned that my favourite painting by Billy Foley will be on display again from April 26 till June 10 this year as part of The Artery Show. The painting is part of the private collection of Professor Stefan Kuks. I very much would like to take detailed pictures of this painting.

At 12:34, I bought the following books from bookshop De Slegte:

I had a short email exchange with Changchang Wu, the author of VisualSFM (an application for structure from motion), about the poor matching that I got on Thursday, March 8. The computer I am using has a MSI GeForce N210 with 512MB card, which is based on the NVIDIA GeForce GT210 chipset. After I installed the CUDA 4.0 toolkit from the website of NVIDIA, and now the results look much better. All the pictures are now in a single model and it looks like they are at the right position. I also downloaded and installed: SiftGPU, pba (but did not move the included DLL files to the root directory of VisualSFM), pmvs2.exe, cmvs.exe and pthread.dll (into the root directory of VisualSFM). I did run CMVS/PMVS but it did not produce any model, as far as I can see, but probably I did something wrong. Although VisualSFM seems to be a very broad program, it feels much like an experimental and academic application, which in fact it is.

About what I still want to write

At 17:31, I bought the book Over wat ik nog wil schrijven (About what I still want to write) by Jean Paul Van Bendegem (ISBN:9789044121711) for € 8.75 (75% off from the original price) from bookshop Broekhuis. It is a little bit a strange book with a strange mixture of topics ranging from mathematics, music, logic, free mansory, skepticism, and pornography. It even has a Go diagram in it.

In the past week, I have been thinking about creating a manual Structure from Motion editor which would be based on a triangle mesh, which is a kind of polygon mesh. The idea is that you would start with one triangle, identify it on multiple images, and next, would subdivide this triangle in smaller triangles, slowly reconstructing, with the help of some algorithms, a 3D model of the object shown in the picture. Some parts of the process could be automated, but the idea would be that the user would always be in control. When I thought about implementing a triangle mesh, I realized that there are several ways to do this (follow the above link on polygon mesh, for some examples, which is really about triangle meshs). Then I thought that this would be a nice example to think about a software engineering language, where you specify a mapping between a specification and an implementation, so that you could select the best implementation based on the way you would manipulate the triangle mesh. Some implementations make some operations faster than other implementations.

But when I started to think about the specification of a triangle mesh, I realized that there are many types of triangle meshes. Even if you abstract away that the vertices have some coordinates, there are still may options. First of all there is a difference between open and closed meshes. In a closed triangle mesh, each triangle is connected to three other triangles. Next there is a difference between single sided meshes and double sides meshes. A single side mesh is created when you have a mesh that contains a Möbius ring. (Note that single sided closed mesh is possible in the form of Klein bottle.) And of course, all kinds of other topological features. But there are other restrictions as well, as you take into acount the vertices. For example it is possible that two triagles share a vertex, but are not connected through a chain of connected triangles. Certain restriction on the type of operations you allow on a triangle mesh starting from a single triangle or tetrahedron will preserve certain properties, but other combinations would not. The simple conclusion is that there is no simple specification of a triangle mesh, and that there is no simple relations with possible implementations.

The flowers of our magnolia have started to open. The first flowers opened last Friday. Now many more have opened, but still not all. Is still quite earlier in the year. In the past week we have seen some very high temperatures for the time of the year.

I already have been thinking about some strong symmetric-key encryption method. The strength of this method is based on strong random source, preferable a hardware random generator. (There are some cheap solutions with webcams.) The first step is to generate a random key from this source and use it to encrypt the message with some simple encryption method. (This is to harden it against statistical analysis methods of similar text.) The key and the encrypted message are input to the main encryption algorithm. This algorithm needs a long (secret) encryption key. The longer the better. We cut this key, such that its length is a relative prime of 20. For each bit from the input, we use 20 bytes from the encryption key to generate a binary vector of 256 bits where 128 bits are equal 0 and 128 bits equal 1. From the the strong random source we generate a number r in the range of 1 to 128. From this we calculate i, which is the position of the rth bit that has the same value as the bit. Note that r is in the range of 1 to 256. The value is output as a single byte. This means that the encoded message will be about eight time longer than the original message plus the length of the first encryption key. But because of this, the random signal will be so strong that it hides the encoded message. The algorithm to generate the 256 bit vector from 20 bytes, simple takes the first 16 bytes (equal 128 bits) and append the inverted bytes. The next 4 bytes are used to perform some kind of permutation on the given 32 bytes. 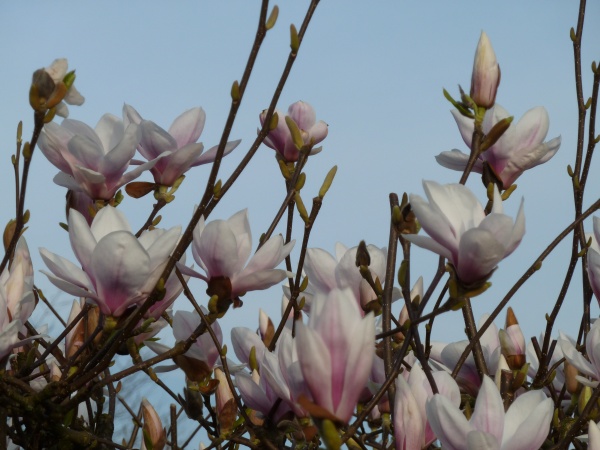 It seems that the majority of the flowers on our magnolia have opened and that spring is here again.

Today, there were several items in the mail. One package from PenStore.nl contained five Pilot purple Hi-Tecpoint V5 pens. Two of these, I start carrying with me. Another package from Bol.com contained the book De bibliotheek van Boudewijn Büch by Frans Mouws (ISBN:9789059116559), which I bought for € 17.95. This is about the library of Boudewijn Büch, a Dutch writer, poet and television presenter, who was also a famous bibliophile. I could not stop myself from starting to read it. The third package, which had to collect from a neighbour, contained 2012 Moleskine Extra Small Blue Daily Diary 12 Month Hard, which I bought, from Bol.com as well, for € 3.04 (75% off). I noticed that the package contained another book as well, and I feared that it would contain a second copy of De bibliotheek van Boudewijn Büch, but it contained the book Heldere hemel by Tom Lanoye. I also got this book for free ten days ago. This months interesting links
Home | February 2012 | April 2012 | Random memories