At the end of the afternoon, I received a small package with an artwork by Peter Struycken. It consist of a recreation of "Process of continuing changing television screen" that he made in 1989 as a commissioned work for the main hall of the VARA offices at Heuvellaan in Hilversum and which was later transfered to Groninger Museum where it is known under the title Vara-programma. The package contained a Cubieboard, which runs the program generating an ever changing sequence of images according to the TPPW program. Floris van Maanen has done the programming using Python. The front contained a print of one of the sequences, just as the box it was packaged in. I don't know if it was send as a birthday present, but I surely find it a very beautiful present.

Today, I analyzed various pictures of the work Komputerstrukture 2a by Peter Struycken in order to check if the reproductions of this work are correct. I studied this on February 6. I spend several hours manually 'digitizing' the four pictures that were taken during the opening of Mondraanhuis on which the work was visible. There were two pictures at close distance with people in front of it only showing part of the work and two pictures taken from a distance, which contained the whole work, but at a low resolution due to the distance. Next I wrote a program that could compare the data from these pictures with a reproduction of the work. This program produced output with the data in which an underscore character is placed at locations that are different from the other pictures. I compared these with the original pictures and tried to fill them in again. This resulted in corrected versions. I added these to the program and compared them again. Later, I also included data from to newspaper articles with a close up picture of the work with Peter Struycken in front of it. Finally, all the data agreed with each other, leading to the conclusion that the reproductions of Komputerstrukture 2a do not contain errors. 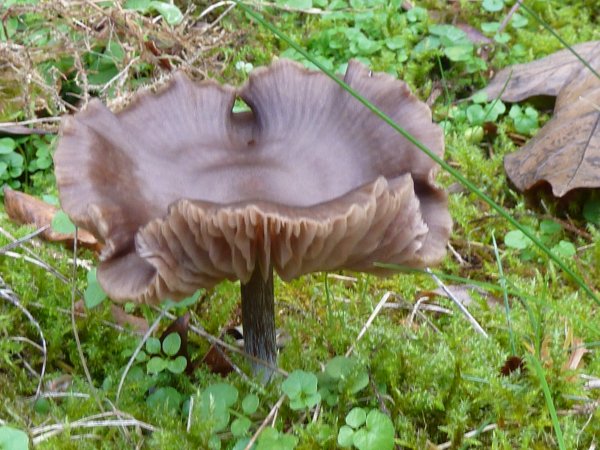 I discovered some mushrooms in the lawn. I took this close-up picture of the largest mushroom. It is really not that big at all.

Looks like I found a bug in the Visual Studio 2008 where it seems that certain expressions in C++ are evaluated different when optimization is applied or not. The combination of a static cast to the type "unsigned char" and a comparison is causing the problem. The following expression, where str is a variable of type "char *": The "char" type was introduced for the representation of characters. At first only the ANSI characters raging from 0 to 128 (not including). These values fit in 7 bits, so when the byte became the default smallest unit of storage consisting of 8 bits, there were two choices to extend the range. The implementors of C decided that the "char" type would be a signed type with values ranging from -127 to 128. Although this chouce gives you a 'small' integer with negative and positive values, it also has led to many programming errors, because it is more natural to think that it ranges from 0 to 256. The type "unsigned char" ranges from 0 to 256, where the values 128 to 256 map on -127 to 0. Appearantly, it also has led to errors in the machine code optimizer of Visual Studio 2008, which tries to find the most compact sequence of instructions for executing the program.

In the past weeks, I have been working on trying to proof the Four colour theorem, based on sequences of 0, 1, and 2. The idea is that if the faces (areas) of a planar graph can be coloured with at most four colours, it must be possible to label all the vertices with either 1 or 2 such that the sum of the labels of each face is a multiple of 3. If you start with just one vertex and label it with 1, you can lay a robe around it. Assuming that one can restrict to planar graphs were all vertices have degree 3, this robe will cross three faces, and we can assign a number to each part, which equals the sum of labels of the vertices of that face inside the robe. In the starting position all parts of the robe will be labelled 1. Thus we can assign the sequence 111 to the robe. Now the robe can be extended in a number of steps equal to the total number of vertices minus two, such that every time a new vertex is included inside the robe. After these steps, the robe will include all but one vertex. At each step the number of faces that crosses the robe will be increased by one, when the new vertex has only edge with the existing group of vertices, or decreased by one, when the new vertex has two edges with the existing group. When the number of faces that are crossed increases, the new vertex can be labeled with either 1 or 2, meaning that the number of sequences that can be assigned to the new robe position doubles. When the number of faces decreases, it is possible that some sequences on the robe in the original position can not be transformed into a sequence on the extended robe, and if it is possible, only one value can be assigned to the new vertex.

I started with some simple cases and discovered that it is always possible to remove a face with four edges. This means that the Four colour theorem only needs to be proven for graphs with only faces with five or more edges. (I discovered today that this was already known by Alfred Kempe.) I wrote a progam to investigate the kind of sequences on robes around certain graphs. The main function for calculating this is given a number of points, a string representing the graph, and a number of rotations that it should generate sequences for. The string giving the graph uses letter starting from 'a' to label the graph. If a sequence of letter is followed by an equal sign, the function checks if the values for these point add up to zero modulo three. If it is followed by a comma or at the end of the string the value of the points modulo three is added. The values for which the function is called are:

The output generated by the program, in which each column represents one way of patterns, is: This shows that there are many combinations of sequences that do meet the requirement that there is at least one of the sequences can be contracted in any possible way, but nevertheless do not contain one of the first thirteen sequences for the two joined faces with five edges (and five vertices). 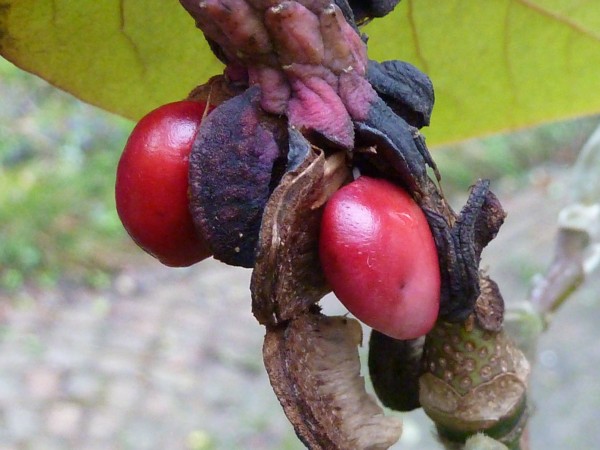 This morning, I discovered some berries on our magnolia in the back of the garden, and I took a close-up picture. In the evening I took these, and one that Annabel found on the other side, inside. I peeled the three berries and we put the black seeds inside a zip bag with some moist potting soil according some instructions we found on YouTube. We put the zip back in the shed in the backgarden instead of the refrigerator because it will be about the same temperature the coming months. From the description of the different magnolias, I get the impression we have magnolia stellata. This months interesting links
Home | October 2013 | December 2013 | Random memories