Around half past nine, I picked-up a small chestnut at Wilminkweg, just outside of Enschede. It looked shinny dark brown when I picked it up, but in the afternoon, when I put it on my desk, it had turned light brown.

Today we had our 'summer' outing of our company. We went to Deventer and in the afternoon we played a GPS game, where we were given a GSP tracker with 24 marked locations. We were also given a sheet with 24 photo's taken at those locations and given the task to pair them up. During the game some extra assignments where given. There also was a challenge area where you could earn extra points by doing some games in the categories: think, dare, or do. For the think game, I solved three tangrams and for the dare game, I comsumed one fried locust. Our team became thirds from the eight teams. In the evening at home, I reconstructed the route we took bases on my memories with Google Earth: KML file or in Google Maps.

I went to visit Peter Struycken again. He allowed me to investigate his personal archive with respect to his (non-commisioned) work. I even could take a part of his archive home to continue my work on compiling a list of his works. (See this page for the results of my ongoing research.) He also gave my a USB stick with all the digitized images of his works he has collected. (He has given me permission to publish these images in the context of my research.) In the past weeks he spend some effort to digitize the many slides he has. He has become quite interested about my research, and after I showed him some of the information that the Groninger Museum has online about him, we thought it would be a good idea to make an appointed to visit the depot and investigate all the information they have about him. They have a large collection of his work and he also donated some of his studies to the museum. I could also take some books (invitations) home. These are:

At 9:35, I bought two books from bookshop Polare. Yesterday morning, I already decided to buy these books, but I did not have a suitable bag with me. The two books are:

This afternoon, I finished reading the book Mathematical Vistas: From a Room With Many Windows by Peter Hilton, Derek Holton, and Jean Pedersen, which I started reading on September 14 the day I bought it from bookshop Polare. I have to admit that I did not read every letter of it, and many times, I did not really try to grasp what it said. I book like this would require many hours of serious study to complete understand every part of it. Still, I found it an interesting read. It surely did made me think about the Four colour theorem for many hours, and it still does.

This morning, I discovered that some prints by Peter Struycken were on display at the Grafiek+ exhibition at the university. These are works owned by Rijksmuseum Twenthe. They were on display in the building "De Spiegel". Around one o'clock I went there and saw the following prints:

This evening, I went to see the movie Gravity together with a colleague. To me the experience of this movie was spoilt by some of the great physics errors that you do expect in a SF movie like "Star Trek" but not in a movie like this, which attempts to be realistic. For some explaination read: Bad Astronomy Movie Review: Gravity.

This morning, I went walking with Li-Xia (in a wheelchair) in the Eco park. I played with the marble track on the artwork Haakse Haas, I found a green marble while searching for one of my own marbles (which I did find later). I decided to keep it and carry with me.

At 13:23, I took a picture of the sundail on the Old Church at the city center, which at noon, can show the approximate date. Unfortunately, the sun was not so bright, so the shadow of the sundial is not really sharp.

At Galerie Objektief, I met with Wil Westerweel, whoes pictures were on display. I gave me a free CD with many of his pictures. Hence, I went to Rijksmuseum Twenthe to see the exhibition Paths to Paradise because I discovered that it included four works by Peter Struycken. It took me some time to locate the four works, because the works were ordered by theme and works for very different ages and thus from very different styles, where combined. I found it a little odd to find the highly abstract works by Struycken between figurative works. I also looked at the "Please do not touch. Even clean hands can damage." installation by Annelies Doom. It consisted of the small shelfs attachted on the wall. The first had two white cloves to handle valuable objects, and the remained shelves had one book for evey word, where the thickness of the book seems to be related to the emphasis given to the word. The book for "not" was the thickest. From the fact that some of the soft covers had curled-up, it seems that the books had been touched. (Later, at home, I discovered that the nine books had an ISBN, namely: 9789461902405, and were published by Uitgever Digitalis. but it's not available.

I also looked at the exhibitions Bart Hess. A Hunt for High Tech, which I did not find interesting, and Renie Spoelstra. Het dode punt van de schommel, that I found intriguing after I understood the idea and process by which the works were made.

Finally, I went to Tetem art space, where I looked at Hybrid Skins and 100 jaar grafiek uit ene particuliere collectie (100 years of prints from a private collection).

I wrote a program that produces the sequence A056353. The program calculates the number of sequences consisting of 0, 1, and 2, such that the sum is a multiple of 3. Furthermore, sequences that are rotated, reversed, or have 1 and 2 exchanged, are considered the same. The sequences for the first number of length are: These sequences are related to the Four colour theorem.

After some puzzling, I constructed the following transition table:

Given a sequence of 0, 1, and 2, the above table can be used to calculate the value for the sequence, by starting with 'a' and calculate for each element in the string another value by using the above table. Now it appears that whenever you end with 'a', that the sequence is a sequence that can be generated from 00. For sequence generated from 12, you get one of 'b', 'i', or 'k'. I guess it will not be very difficult to prove this, by the effect of rules for replacing two digits by three digits in the generation step. Below the table extended with the number of sequences ending at the given letters:

When studying the transition one can see that each column has all the letters from 'a' to 'l' exactly once, meaning that they are permutations of each other. It is well known fact that any set of permutations is related to a finite group. The table can be used to construct the following group (with 12 elements): 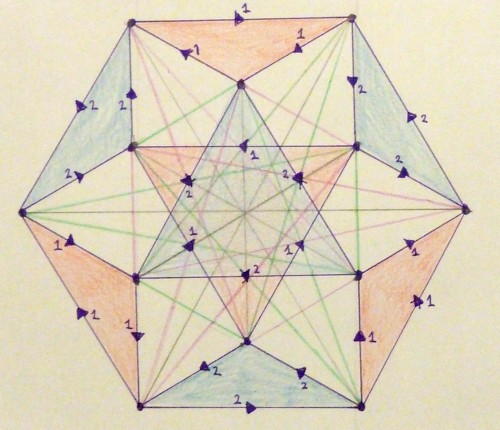