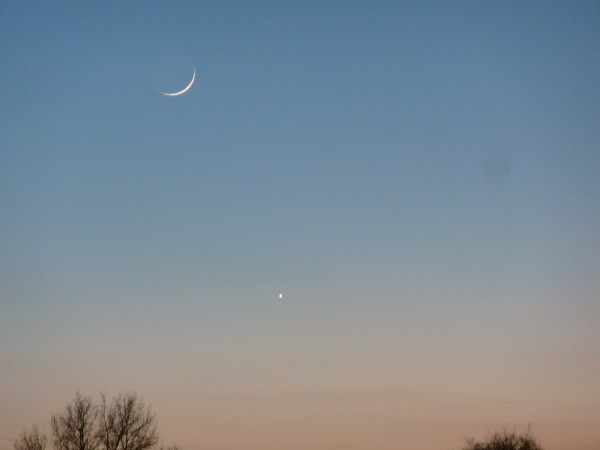 When biking home, I took this picture thinking that the planet below the moon could be Mercury, but while biking home, I remembered seeing Venus some time ago at a some what higher position and reasoned that it might just have seen Venus. When I looked on Planetarium it was clear that it was Venus all along.

This afternoon, at 3 o'clock, I bought the book/box Past Present Peru: Photos, Music, Films, Volume 1 with materials collected by John Cohen, ISBN:9783869301037, for € 7.50 from bookshop Polare. The original price was 125 Euro, but Polare was selling it for € 24,99 until it went on sale these days. The box consists two books with lots of pictures, a booklet with three music CD's and a booklet with five DVD's with movies. The material was collected over a periode of 50 years. I was one of the items on my wish list.

Today, I received a copy of the calender struktuur 68, which contains twelve original prints by Peter Struycken. It came with its original envelop (including address sticker). The title page has been torn off. It was distributed by Océ to its business partners. The design is by Jacques Peeters. It was printed by "Drukkerij H.C. van Grinsven N.V." in Venlo while the lithography was by "De Reproductie Compagnie N.V." in Rotterdam. It would not surprise me if the inks being used for the prints were mixed by Struycken himself.

This morning, I visited bookshop Van Gennep in Rotterdam. I just arrived when the owner opened the shop four minutes before 10 AM. I found this quite an interesting shop. Not the usual shop that contains the current top 100, but the books less read by the masses. At 10:39, I bought four books from the table of books on sale. These are: For the last three, I paid 5 Euro.

I went to Rotterdam for a company outing. The route we took based on my memories with Google Earth: KML file or in Google Maps.

At 17:34, I bought two books from the sale at bookshop Polare, where they were giving an additional 50% off from the reduced price. The books are:

This afternoon, I visited bookshop Polare together with Andy. We went to the second floor, where he looked through some comics. I looked at the German edition with notes of Goethe's Faust but I decided not to buy it. At 14:25, I did buy the following book:

At the end of the afternoon, the news came that Polare was going to temporarily close its twenty bookshops in the Netherlands to think about their strategy to deal with their financial problems. A little bit a strange move, because if you close your shops and even your online shop, you are not going to generate any income anymore. I decided to bike from the office to their local bookshop, where I arrived five minutes before closing time at six. The employees where still optimistic about the future of the shop. In the Netherlands it is not easy to fire your employees in a cheap way, except for letting you company going bankrupt. At 17:58, I bought: This months interesting links

Today is the first day of the year of the horse according to the Chinese calendar. The spring festival has begun.
Home | December 2013 | February 2014