I went by train to Amsterdam. Due to an accident, I was forced to take a detour through Zutphen, which incured a delay of half an hour, and forced me having to travel standing till Zutphen. I arived in Amsterdam around one o'clock. I took the free ferry to the former N.D.S.M. shipyard. There I visited two art galeries. First I went to Nieuw Dakota to see the Drawing Front. I liked a drawing by Eline Lutz. Next, I visited Francis Boeske Projects to see the Untitled, 2016 exhibition. There were large painting by Oscar van der Put using bright and low saturated colour, or in other words, almost white paintings.

I took the same ferry back to the central railway station and walked to bookshop Scheltema where they were having a sale. I walked through the whole shop and looked at hunderds of books. I bought only two books:

After staying more than two hours in the bookshop, I walked back to the central railway station, and I returned in Enschede around eight in the evening. 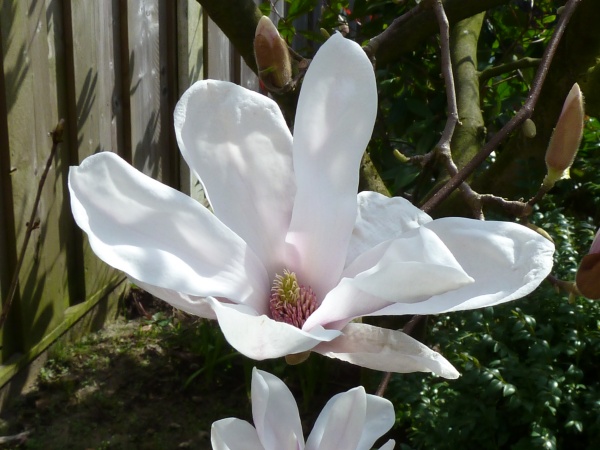 Our magnolia now is full with flowers. I guess that about half of the flowers have opened. The first two flowers that opened last week have turned brown. The tree also spreads a strong fragrance in the garden.

This weekend, I continued working on the program generating street tiling patterns. I have tried to eliminate double patterns, but it seems there are still some in it. Below patterns with area up to 20 unit squares can be viewed. These patterns do not have places where four tiles (possibly of different sizes) touch in a corner. Also the tiles are restricted to tiles of one by one, one by two, two by two, two by three, and three by three. Patterns which contain a H (possible rotated by 90 degrees) are also excluded, which reduces the number of patterns considerably. I also realized that some tiling patterns can be viewed as weave patterns. For this all tiles used should have at least one side with unit length one. And the one by one tiles should be assigned to either the horizontal or vertical ribbons. And each ribbon should have a ribbon in the other direction going under it. Preferable each colomn and row should have a ribbon. Under the patterns that are excluded below, there are valid weave patterns. Remark: The list of patterns has been corrected with results found on April 13.

I calculated the number of Street tiling patterns for various restriction with latest version of the program to see if maybe some of the sequences are included in The On-Line Encyclopedia of Integer Sequences®. I did not discover any of them, which either means that they contain errors or that nobody ever looked at them. The sequences are given below, were each column gives the number of unique street tiling patterns with respect to rotation and mirroring with stated area. The first row gives all the sequences without restriction. This also contains sequences that repeat themselves, thus have the same appearance as a sequence with an area that is a fraction of the area. These are excluded in the second sequence. This sequence still do contain points where four tiles meet (indicated with 'x') and that contain H-shapes (indicated with 'H'), and where some of the vertices in the H-shape might actually have four edges instead of the three that the H-shape might suggest. The following sequences have additional restrictions on the occurences of the number of tiles that meet in a point and the occurence of H-shapes. The 's' signifies the additional restriction on the size of the tiles, restricting them to one by one, one by two, two by two, two by three, and three by three.

An observation related to the Four colour theorem. Given two triangulations of a regular n-polygon. When these are placed inside a regular 2n-polygon such that vertices of this polygon alternatingly match with the vertices of the two n-polygons, then there can be found exactly n-2 'empty' hexagons in the pattern of lines of the triangulations of the polygons, where each hexagon consists of segments altenately taken from the two triangulations. The proof for this is rather simple. There must be a sequence of five vertices on the 2n-polygon, such that v1, v3 and v5 hava a triangle in one of the triangulations. There will also be a triangle attachted to vertices v2 and v4. The third vertice, vi of this triangle must be somewhere outside of the sequence. This is the only triangle that 'crosses' the first triangle, and also the other way around. The two 'crossing' triangles have a (irregular) hexagon with alternating segments from the two triangles. Now it is possible to construct two (n-1)-polygon with triangluations by removing the two triangles. Removing the first triangle is trivial because it is on the outside. To remove the second triangle, the edges v2 to vi and v4 to vi have to be merged. The various combinations for n equals six are shown on the top right using the colours red and blue for the two triangulations. The four hexagons are coloured white.

Around eight in the morning, we had was a clear blue sky, which made me doubt the weather report that we would get hail and (wet) snow. But around 10:50 there was hail. The sky cleared again. But then again noon there was hail and also wet snow. And two hours later, again hail, that even covered the ground for some time. The temperature has been rather low for this time of the year. It is about 25 years ago, we had such low temperatures at the end of April. Last night the temperature drop to -0.7° Celsius. The highest temperature during the day, was just below seven degrees Celsius. The temperature graph below, clearly shows the drops in the temperature during the day that matched the periods of hail and wet snow. I read that some soccer was aborted due to snow on the field around here. 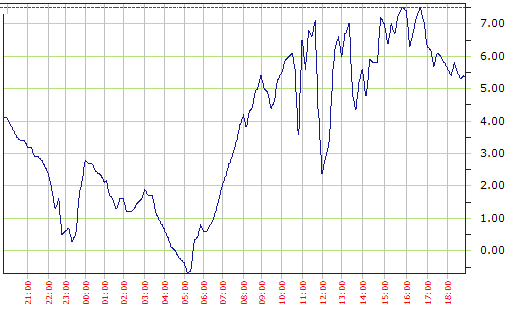 Often when I write a program, I make use of a simple single linked list to represent a mapping from keys to values. Sometimes, I even do not bother about the list being sorted or stored in the order the elements were added. Of course, there are containers available for this in the Standard Template Library and Boost, but these require me to import the whole library. This afternoon, I decided to implement a simple insert-only template for a program that I am working on. The template class InsertOnlyMap only has one method to find or insert a key to the map. The method will return a pointer to the value for this key, which might already have been present in the map or otherwise is added to it. Furhtermore, it defines an iterator that can be used to iterate over the values in the map. They key class should have a compare method, which return a integer representing the compare result. A negative value will indicate that the value is smaller than the one it is compared with and a positive value indicates that it is larger. The implementation is based on a binary tree that is being balanced on every insertion.