I went to Amsterdam and visited some bookshops. First I went to Bookshop Scheltema. I saw some interesting books, but I did not buy any reasoning that I could better buy them tomorrow on my way home. Next I visited Athenaeum, where I looked a round a little. From there crossed the road the American Book Center. At 14:14, I bought the book The Truth by Neil Strauss. Last I visited Het Martyrium. I considered buying the complete works of James Joyce and Being and Nothingness by Sartre.

In the evening, I went to the opening of the exhibition Het Idioom van de Abstractie at Art Chapel, where there are some works by Peter Struycken. I met with some people I knew and got some questions of the SHA2017 badge I was wearing.

In the morning, I finished reading the book On Photography by Susan Sontag, which I started reading on June 12. I bought it on Saturday, April 2, 2016. The book presented some interesting insights, but I also found it rather philosophical and hard to grasp. What often is lacking, for me, is a clear structure of the argument she is trying to make. It looks like she starts with an idea and then wanders around all kinds of corners and end somewhere close to where she started. I got the impression that much of what she wrote did not stick with me. Maybe I am not smart enough to comprehend her line of thinking.

In the afternoon, Meindert and I visited some galeries. First we brough a short visit to Torch Gallery and watched the Grayscale exhibition with works by Alain Laboile, Louise te Poele, and Hengki Koentjoro. Next we went to Ron Mandos to visit the Best of Graduates 2017. I voted for Maarten Broekhuizen with his work The Post Topographic. I also liked (parts of) the work Best of Breed by Valentina Gal. After we brought a short visit to Gallery Borzo, we went to Huis Marseille: Museum voor Fotografie. There we saw some recent works by Juul Kraijer. 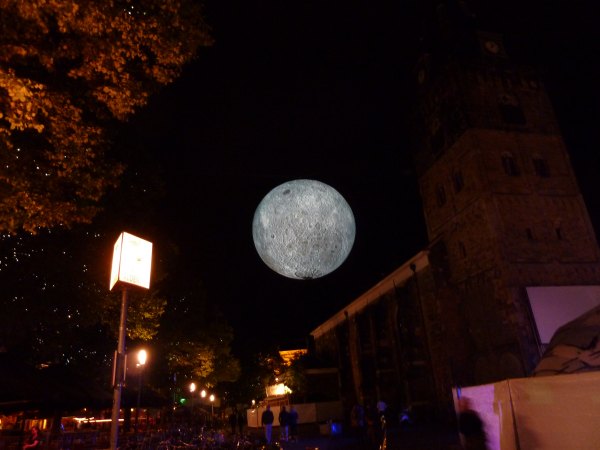 Around four in the afternoon, I arrived at in the city center to help 'decorate' the TkkrLab stand on Gogbot. We were located between the info desk and the bar. I watched part of a performance by Empress Stah (with a laser) in the middle of the Step in the light installation by Michel Suk. When I left, I took some pictures of Museum of the moon by Luke Jerram. One of them.

It was a rainly day. For most of the afternoon and the evening, I stayed at TkkrLab stand at Gogbot. During the relatieve quiet afternoon, I build a Creep Cluster by Reverselandfil (following the build guide) and in the evening, I joined them with their noise performance on the stage on the square for a quarter of an hour. I looked around in the Grote Kerk and saw: A thing and its essence by Joseph Klibansky, Phyllotaxis by Daan Johan and Joris Strijbos, and works by Freek Wieringa. At Concordia, I saw Cogito by Daniela de Paulis and Fractal Shorts by Julius Horsthuis. At Menistenkerk, I had my brain 'scanned' with The Brainlight by Laura Jade. I also saw Superpower Studio by Dominica Chen (which I already at seen at the Rietveld Academie on July 9, 2017 ) and I looked at a Beowulf cluster of 37 Rasperry Pi's. At the end of the evening, there was another performance by Empress Stah, this time before the church in a transparend sphere.

Together with Andy, I visited TETEM art space, where we walked around and saw Spectra by Matthijs Munnik. The effect of seeing all kinds of colours in a blinking light is familiar to me. Still interesting to see it. 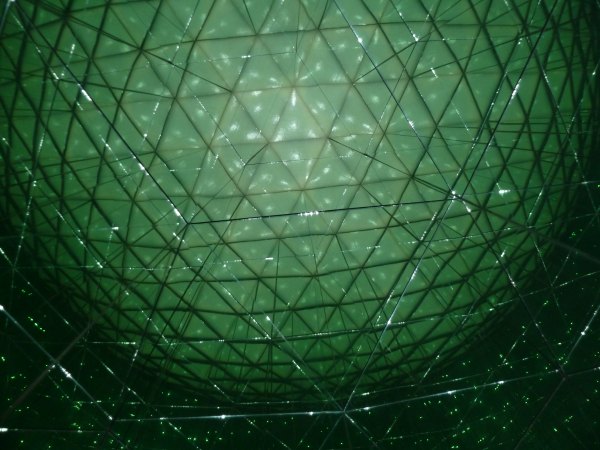 I went with Andy to the former Coberco milk factory to see the Gogbot exhibition there. The most interesting was a tapered kaleidoscope. I took several pictures inside it, one of which is shown here above. The other exhibits that I found worth mentioning are:

Finished reading the book The Truth: An Uncomfortable Book About Relationships by Neils Strauss, which I started reading on September 2, the day after I bought it. This book continues where his book The Game, which I read in July, ended and is even more interesting and thought provoking than that book. I very much enjoyed reading this book and it realy made me think about my own life.

I went to the opening of the exhibition Wegzeichen with works by Carina Schüring organized by Kunstverein Vreden. Bernd Sikora gave an introduction. Although it was in German, I had no problem with understanding it. Although I had seen the work recreating familiarity last year, I appreciated it much more than I can remember, probably because of how it is exhibited. I also like her work embracing insecurity. It was also nice to see the drawing Alles (Everything) again. I also bought Carina Schüring Portfolio 2017 with a introduction by Arjan van Helmond from her for € 35.00. (One of three copies as I found out after I bought it.)

In the evening, I went to a live performance of Heliophile for their debut CD Permeate. Before their performance, there was a performance of Voltmeister Modular. I bought the CD and listened to it at home.

In the past month I have been thinking about an alternative algorithm to tackle the Irregular Chocolate Bar problem, but it has failed to materialize. This week, I decided to see if I could improve on the existing algorithm to get at least some solutions. It is always nice if you can limited you search space by an upper limit. I started the program yesterday afternoon and by the end of this evening, it already found over fifty thousand solutions with 20 integers. This makes me wonder if there is a solution with 19 integers. These solutions are found by constructing a 'chains' solution for 18 integers and then twice split an integer into two. The improvement on the algorithm is that it first performs some check on the solutions for 18 integers with an alternative knapsack algoritm to see if it possibly could contain a solution with some additional splitting, before trying all possible splits and testing them against the existing algoritm. The first solution found by the program is:

It is clear that the fall has started. I saw some very large mushrooms along the road. At 10:21, I picked up six big chestnuts from a tree on the Hengelosestraat near number 569. There were many more on the ground. 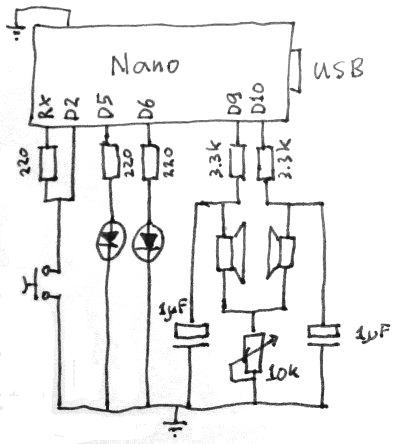 A friend of mine wanted to have a brain machine like the one offered by Ada Fruit, but when it turned out that the international shipping costs were rather high, I decided to build one myself from parts. I started with the design by Chris Sparnicht and took some ideas from the brain machine from Ada Fruit with respect to the schematics of the headphone. I also decided to use a single potmeter to control the volume by putting it between the 'ground' of the earphones and the ground. I am aware that this could cause some crosstalk when the volume is reduced, but I hope it is not going to be a big problem. While at TkkrLab, I arrived at the principal schema as displayed on the right and made a shopping list of parts. I bought a cheap Arduino Nano clone from the stock at TkkrLab.

The program for the Irregular Chocolate Bar problem for up to and including 9 equal divisions has found 105869 solutions with 20 integers starting with three 'chains' and two additional cuts. A 'chain' is a sequence of integers, where each pair of consecutive interers add up to alternating 280 and 315. It is now working on starting with a 'necklage' and three additional cuts, but has not found any solutions yet. It would not surprise me, if it does not find any aditional solutions. I checked if any of the solutions could be divided into 10 equal divisions, but this was not the case. Below the 'smallest' solution is given, with respect to the integers being used.

Last week, I bought the following parts from STORES for the brain machine: This afternoon, I spend about four hours working at TkkrLab at assembling the brain machine. I spend some time removing some material from the PCB of the Arduino Nano near the USB connector with a file, to make it fit in the box. Next I spend some time putting the components on the PCB. I also attached some wires (not all) that will connect to the jacks, the potmeter and the reset button on the top part of the box. Below a picture of the PCB in the box, where I added some red lines to indicate how the components are connected on the back, and a picture of the back of the PCB. 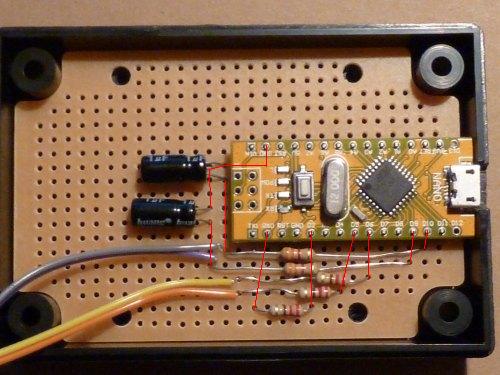 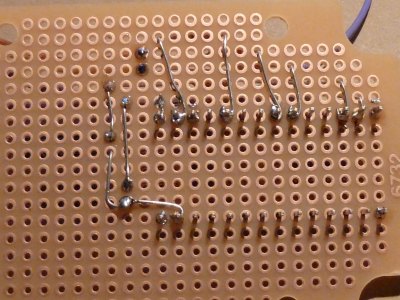