Bring Your Own Beamer

This afternoon, I went to Tetem Art spaces to join in the Bring Your Own Beamer event held in the evening. I spend some time trying to get my project to work. I had brought both my netbook and the Dell Latitude D630 laptop besides two old monitors: The one that I am using at TkkrLab and the Iiyama ProLite E438S-B LCD monitor. After some experimenting, I concluded that the VGA output of the netbook was giving some problems with respect to producing a stable image on the monitors. I was happy that I had brought the laptop with me. It took me some time to get the resolutions right, At the end of the afternoon, some others from TkkrLab arrived. I could use one of the beamers that they had brought. One of them helped me to get the right settings for the beamer to work. It has only a 800 times 640 resolution, which meant I had to adapt my page a little. There were people from Germany and Belgium (Ghent) who had come to show their art. It seems that I was the oldest person that had brought a beamer.

Around eight in the evening, the first people started to arrive. Vistors had to pay a € 3.00 enterance fee, for which they got three tokens (jigsaw puzzle pieces) that they could donate to the people having brought a beamer, who at the end of the evening can exchange them for money again. The city councillor for culture, Jeroen Hatenboer, also came. He went around everybody, because he was asked to award a price. At the price giving event, he did mention my work briefly. Some people asked me how I had made it. Some were surprised that I used JavaScript and that the beamer simply showed a full screen webpage. I also talked with some other constributers and artist, such as Willemijn Calis, gehirn1984.tumblr.com, Kitty Kruidhof, and Stefan Siderius. At the end of the evening, I counted six tokens, which I donated to some other contributors. The two other contributions from TkkrLab did get more tokens. I did bring the token bucket home as a souvenir.

This afternoon and some part of the evening, I helped with moving TkkrLab to our new location, called Space 5.0. Not everything has been moved yet and there still a lot that needs to be done at our new location. I spend most of the time moving things from a side entrance to the new room using two trolley carts, while other worked on getting things from the old location or putting up cupboards in the new room and stacking them with boxes. Around dinner time, someone went to get some Chinese food we ordered. After the dinner we had a team effort bringing the parts of the large (about four meters long) electronics desk up to the room.

Basic Teachings of the Buddha

Last Friday, I finished reading the book Basic Teachings of the Buddha by Glenn Wallis, which I started reading on January 19, the day I bought it. The books tries to give a basis introduction to Buddism based on sixteen suttas selected by the author and translated from the original Pali. The book start with a good overview of Buddhism through the ages. Then the text of the sixteen suttas is given, followed by sixteen sections with explaination and notes. Because I read these sections right after reading the text of the sutta, I would have preferred it when the explaination and notes would have followed immediately the sutta text they are related to. I like the non-religious, scientific approach that the book takes in explaining Buddism, taking the text as a starting point instead of a certain tradition, of which there are many within Buddhism. I also like that Wallis is not affraid to use his own translations of certain Pali words, instead of the common English translation, usually accompanied with a detail explaination. The book made me realize that the philosophy behind Buddhism is deeper than I had thought. Yet it did not make turn to Buddhism.

For time in a long time, I found some AKI finals catalogues at charity shop Het Goed. From the three that I found, there was one, that I did not have already. I also found some other new art and architecture books. At 16:38, I bought the book AKI Akademie voor Beeldende Kunst: eindexamencatalogus 1997 edited by Bas Könning, Marijke Harmens, Coen Scheen, Sipke Huisman, and Maarten Binnendijk, written in Dutch, published by AKI Akademie voor Beeldende Kunst in 1997, ISBN:9789075522082, for € 2.50.

Yesterday afternoon, it started to snow. At first the snow did not stay, but later more and more stayed. When I biked home from TkkrLab it was snowing. This morning, I measured more than 1.5 cm of snow on the table outside, but the ground was not completely covered with snow, due to the fact that it is still too warm for the snow to stay. For the coming days the forcast is that temperatures will be below zero degrees Celsius, so some of the snow may stay for some days.

At 10:43, I bought the folowwing books from charity shop Het Goed:

This morning, I finished reading the book The Mating Mind: How Sexual Choice Shaped Human Nature by Geoffrey Miller, which I started reading on November 19, 2016, a few days, after I bought it. My favourite quote from the book taken from section So Why Can't My Boyfriend Communicate? on page 382 is:

Evolution's job is to motivate us, not to satisfy us

I found this an interesting and insightful book. Although the author admits that some parts are speculative, it seems to be reliable and based on scientific research of the past decennia. The only comment that I have, is that at some places, it is a little too exhaustive in it reasoning, making it sound repetitive.

Today, I attended Eth0:2017 Winter. When I arrived at a quarter past nine (after having traveling through a village called Stroet when I realized I was on the wrong road and wanted to take a short cut towards the correct road, but got a little lost), most people who attended for the whole weekend, were still asleep. I spend some time reading a book until the Frack space opened around half past ten. During the day, I spend some time working on Webserver on NodeMCU and talked with various people. I talked with man who had developed various configurations of fixed sized PCB's into round shapes. The idea is that PCB's get cheaper when you order in larger quantities. But if all the PCB's are the same, you need to find a way how to connect them all in nice way, without wires going everywhere. I wrote some Python scripts to solve some of these problems. I talked with a woman about wearable electronics based on the LilyPad platform and she showed the various components she had bought. I also did the free soldering project from Frack: A bistable flip-flop with two LEDs and two small potentiometers. It was tested with some almost empty 9V batteries.

In the past weeks, I have been experimenting with designing a simple file system to be stored on an SD card, as part of the project to build a webserver on a NodeMCU that could serve this website. I finished a first implementation, which uses a file as a block device. This evening, I checked in a first version on GitHub and experimented with mmc-utils, but not which much success.

At 09:31, I received the book Designer Apartments written by Julio Fajardo, written in English, German, French, and Dutch, published by h.f.ullmann in 2007, translated by Frieda B.K., Ulrike Hanselle, Arnaud Dupin de Beyssat, and Tanja Timmerman from Diseño De Apartamentos written in Spanish, ISBN:9783833123535, which I had bought on Wednesday, February 22, 2017 at 18:23 from BOL.com for € 9.99. 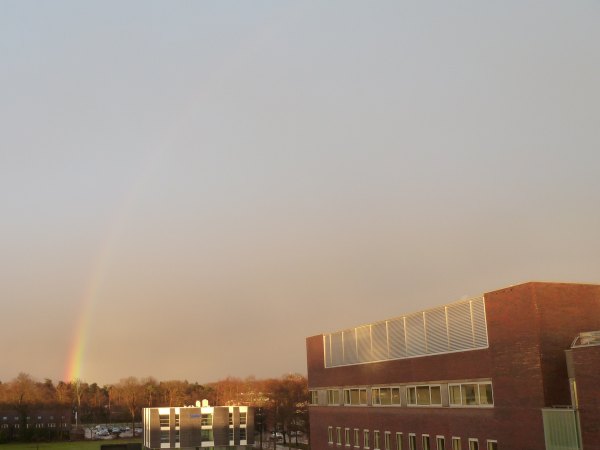 Just when I wanted to leave the office, I noticed that the sun was shining while it was still raining. I also noticed that the sun was low at the horizon. I quickly ran over to the otherside of the building to see a complete rainbow (not fully visible from the point I was standing) with a very bright patch just above the horizon. I took the above picture. Later, I went to another side of the building to take another picture of the bright spot at the other end of the rainbow and affirming it was indeed a complete rainbow. This was between 10 to six and six in the afternoon. This months interesting links
Home | January 2017 | March 2017