At 15:09, I bought the book Groninger Museummagazine. Jaargang 27, no 1 edited by Steven Kolsteren, Willemein Bouwers, and Rudo Menge, written in Dutch and published by Groninger Museum in 2014 from charity shop Het Goed for € 0.50. 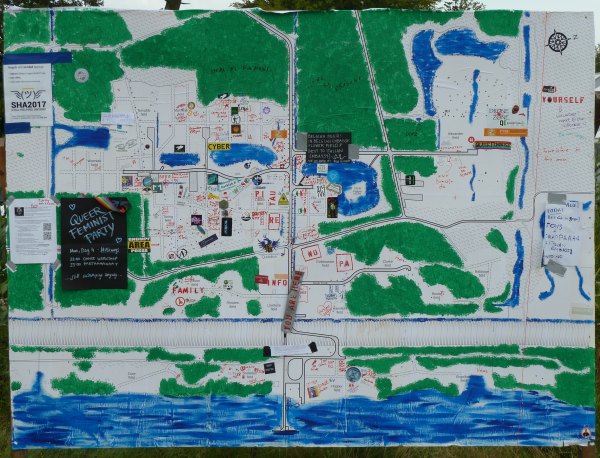 At the end of the afternoon, I returned from SHA2017 hacker camp, where I went to with some people from TkkrLab. This is the first time I went to such a camp and I had a great time. In the evening the camp was like an open-air disco with music and lightshows everywhere. One evening there was an event on the camp with home built vehicles, including riding pieces of furniture and also a KarTent on weels. I wrote two more badge apps: One for upcoming events (based on code from Event Schedule) and one named FFAA5E for setting random 'orange' pixels on the Pixelflut LED wall. Sunday morning, I bought the brain machine from Mitch Altman. I was a parking angle and did six shift with a total of about sixteen hours for which I was rewarded with meal vouchers and allowed me to enjoy the fantastic (mostly vegaterian) meals cooked for the volunteers. Notable talks I attended are: I have not taken off the SHA2017 wristband now that I got used to it. Maybe I will start collecting festival wristbands like I saw some others do.

Who Stole My Spear?

This morning, I finished reading Who Stole my Spear by Tim Samuels, which I started reading on July 24, after I bought it on July 22. I found this a very interesting book. The book states that although in our modern society men are still in the majorithy in the higher regions of society, the bare facts are that in many areas men on average fare worse than women. The author argues that men have a harder time dealing with our modern society, which diverts furhter and further from our ancestoral hunting and gathering style of living. This books writes about important issues that should get more attention, especially among young men, because man usually do not talk about these issues.

This morning, I visited TETEM art space, where I watched the videos By way of other directions by Lou Mouw and Ars Electronica Sparks Residency - Anouk Wipprecht on “Agent Unicorn” EEG wearable. At the start of the afternoon, I visited Bookshop Broekhuis. At 13:05:48, I bought the CD Passaggio: Ludovico Einaudi by Lavinia Meijer for € 9.99 and at 13:11:41, I bought a Moleskin Van Gogh Sketchbook for € 7.25 with 50% off.

With respect to the Irregular Chocolate Bar puzzle, I wrote down the following proof:

This evening at TkkrLab, I put together the brain machine that I bought at SHA2017. I sat at our work bench and followed the instructions on my tablet. I did not follow the instructions to the letter. For example, I did not extend the wire to the battery holder, but soldered the wire directly on the contacts of the battery holder. I used some double sided tape to attach the battery holder to the pair of glasses. I used one of the tie wraps to attach the PCB to the pair of glasses. I did not use any glue or scotch tape. I might if I apply the decoration. Several members helped me with drilling the holes and finding things I needed. I was happy I managed to finish it in one evening and several people tried it out.

This afternoon, I bought a collage from Kira Fröse. I saw this work at the AKI finals 2017 exhibition. I met her for the first time during the opening of the AKI's serveertip, which ended yesterday. This months interesting links
Home | July 2017 | September 2017