Through a tweet by Cliff Pickover, I was directed to website Robert Fathauer: art inspired by mathematics and nature where I found Three-Fold Development, which reminded me about the Fractal Jigsaw that I worked on last year. I thought about remaking this with a 3D printer. Then I noticed the remark that it was based on a 3D model by Henry Segerman. He has written the interesting book Visualizing Mathematics with 3D Printing. A collection of designs can be found on Thingiverse. I did not find the design for the Three-Fold Development. I spend some time figuring out the design myself, making some drawings. I also have been thinking about the different transition methods. I also got the idee to use a 3d printer to make the fractal jigsaw puzzles. 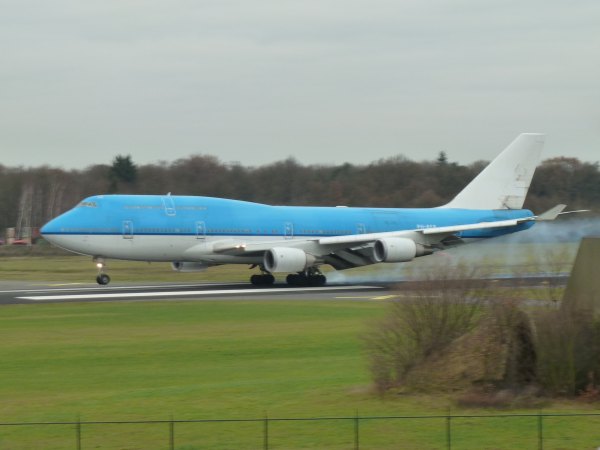 I biked to Enschede Airport Twente to see the arrival of PH-BFR, a Boeing 747-400M, on its last flight, Flight KLM747, in order to be taken apart here in Enschede. The plane landed at 13:05. It is the biggest plane that ever landed at the airport. I found a small map of the last part of the flight, which I guess, is about the part we could see from the airport (except some part when it was behind trees). I took fifteen pictures. Here on the right the one of the touch-down.

At 17:31:48, I bought the book Observatoria written by Michiel Schwarz in Dutch and published by Westland/Utrecht Hypotheekbank NV Amsterdam in 1980 from charity shop Het Goed for € 0.20.

In the evening, I went by car to Hack42, a hacker space in Arnhem to attend a lecture about the Gigatron TTL Color Computer. About half way, it started to snow. First a little bit, but it quickly is became stronger and the snow stayed on the road. The traffic had to slow down at some points to below 50 Kmph. I did arrive in time. On the way home, it has stopped snowing and the snow had started to melt, but on the first part on the highway, it seems that the snow had frozen to the road, because the wheels made a lot of noise, not allowing to drive faster than 70 Kmph. At the second half it was possible to drive at a normal speed, but I found most people driving at about 80 Kmph.

The Gigatron is a processor build with 36 TTL chips, an EPROM chip and a 32Kb ram chip. The design was made to include as less as possible chips. This resulted in a 8-bit RISC processor design, which runs at 6.25Mhrz. They managed to make it produce a VGA signal with 64 colours. They also programmed an interpreter for a 16-bits language which processes the program when it is not generating the VGA signal. They showed how it could be used to play the breakout game in colour. Thus improving on the design of Steve Wozniak, with the number of chips needed and the functionality. It should be noted that at that time 32Kb ram chips where not available yet. They plan on making it into a kit with a nice case around it. I am considering to buy one.

I left at 8:16 from Enschede, hoping to arrive at 10:30 in Amsterdam. But half way between Apeldoorn and Amersfoort the train stopped in the middle of nowhere. It was announced that the overhead line had broken ahead of us, and that the train had to return to Apeldoorn. We were adviced to go back to Deventer and travel further over Zwolle. There were some more delays and it was only at 12:52 that I arrived in Amsterdam. It was snowing, but the snow did not stay.

While on the train, I finished reading the book The Seducer's Diary by Søren Kierkegaard, which I started reading on November 18 and bought on December 14, 2013. I found the story to be completely unbelievable, including its form.

In Amsterdam I went to bookshop Scheltema, where at 14:37, I bought the following two books:

Next, I went to gallery andriessen & Eyck to see the exhibition Drawing & and more showing drawing by five artist and a work that is not a drawing. Peter Struycken was one of the artists. Besides two drawings, there was also a large wall carpter. Although this day of the exhibition there was no formal opening, but some of the artist, including Peter Struycken and some of their relatives, came to visit. I also met Antonietta Peeters and talked with her about her work.

In the afternoon it snowed. At the end of the afternoon, it started to rain. While biking around the city I encountered three instances where cars (and one city bus) had hid each other. In all cases, the damage seems minimal. I also one time encountered a car slipping. In the evening, most of the snow on the roads had disappeared.

Around four in the afternoon, it started to hail. The hail was quite fine, but still hurted when touching the skin. After about twenty minutes the hail changed into snow. About an hour later it changed to rain. In the west of the country there were a lot of traffic jams and problems with trains. In the middle of the country 44 cm of snow was measured at one location.

This weekend, I continued my research on the grammar for the horizontal continuation for an infinite street tile pattern. The program I had been working on, crashed due to heap exhaustion. I already had discovered that I could reproduce the result of November 12 with the smaller number of states, if I would work go up, instead by going down, which actually comes down to using the upside-down encoding, like: But it did not bring me much further. As a next step, I decided to develop a version that does not store illegale chains, after I verified that it did not matter. This program was able to find all illegale sequences of lengths smaller than sixteen. I worked on developing a grammar to encompass all sequences. This resulted in the following regular expression (spread over multiple lines for readability): I searched the internet for an online converter to DFA. I found Regex => NFA => DFA by CyberZHG. It uses a slightly different notation, so I rewrote the above expression into: (A|B|C)A(ABC)*AA|((A|B|C)AAD|(H|I)D)((A|ϵ)AB(A|ϵ)D)*(AAA|G)|(((A|B|C)AAD|(H|I)D)(ABD|ϵ)AA|(G|H|I)AB)DDEFD(ABG|AA(DAB|ϵ)(DAAA|DG))|(((A|B|C)AAD|(H|I)D)AABC|(H|I)AB)(AADEAA|AABA)(ABG|ABCA(DAAA|DG))|(H|I)ABG|(D|E|F|H|I)A(D|G). It returend a nice graph, but it seemed not to be the most compact representation.

Below some of the long sequences of the different parts of the grammar are given together with the lines that can be inferred from them:

I took a new approach to the Street Tile Patterns and wrote another program. The idea was to implement an alternative method to calculate the 'states' of the DFA underlying the grammar. After I implemented it, I tried different depth, discovering it found more and more states. But then I realized, that many states might be equivalent. I found a method to determine equivalent states, and discovered that depth six, no more states were found, thus concluding that there are 89 states. I spend some time analysing the states with an idea to put them into a diagram. This evening, I spend analyzing some of the generated sequences on which I based the grammars, and discovered that all those sequences make use of a rather limited subset of states. I need some more time to construct a diagram.

I spend some more time working on the the Street Tile Patterns. I established that each state can be reached from each state. If this would not be the case, it would have some implications for the infinite non-repeating Street Tile Patterns. I wrote a small program to see if the states could be used to generate a random pattern (within a square) without using back-tracking, and it turned out that it was not possible. I guess there must be a method to connect the DFA with itself to determine how to generate from a given sequence (matching the DFA) a sequence below it that also matches the DFA.

I played my first game of Go in almost a year. I played quite agressive, to my own surprise. I made several invasions and almost killed a black group in one of the corners. But in the end the black player found a good move, to which I did not know the answer, tipping the scales in his favour, forcing me to resign. On the right of the status of the board, just before he made his last move to kill a lot of white stones.

In the past weeks, I continued working on the Street Tile Pattern in an attempt to generate 'large' random patterns. This evening, I succeeded in doing so with the latest version of the program, but I am not very satisfied with the patterns being generated, because they have a certain bias.

In the morning, I played against Francien. I played slower than last year, but I still missed some important moves and lost too many stones because I did not watch out enough. I played black and lost with 16.5 points. On the right the state of the board at the end of the game. White had captured 24 black stones and black had captured 13 white stones.

In the afternoon, I attended a game exposition of Game 27 - AlphaGo Master vs Fan Tingyu. I did not fall asleep, which I guess means it was a good exposition, because usually I do fall asleep during go workshops.

At nine in the evening, Erwin Bonsma gave a workshop on how to solve the Rubik's cube from scratch by using a trick to find your own algorithms. I used it to derive some algorithms for my own method for solving the cube. I have method that uses a minimum of algorithms, some very simple ones that I would not even call algorithms anymore. The methods starts with solving the edge pieces, and uses one algorithm (and it mirror) to move all edge pieces to their proper location. (See for a similar method, the page Solving Rubik's Cubes: All Corners Last.) The two algorithms I constructed are one for flipping two edge pieces: R'UF'U'FU'RU and one for moving moving three edge pieces: R'U'RUR'URU'RUR'U'. Afterwards, I asked him if he had discovered this himself and he told me he got it from a YouTube video. I spend some time searching for that video. I think it is the video: A simple trick to crack all Rubik's cubes. For another description, see also: Commutators: corner twists. I also found some interesting video by Dmitry Zaytsev: Rubik's Cube 3x3. Edges First Method , No algorithms, no notation. Part 1, Part 2, and Part 3. This months interesting links
Home | November 2017 | January 2018