In the evening, I worked on the program for the the Irregular Chocolate Bar puzzle and found more solutions for 7. Already some time ago, I started working on a version of the program that iterates over all partitions for a given size, such that the largest piece in each bucket is ordered from large to small and such that inside each bucket the pieces are also ordered from large to small. The idea is that by doing this, it is possible to avoid partitions that similar to an earlier partition except with respect of the order of the pieces. Furthermore, the algorithm has implemented a check to stop trying to construct a partition when in some bucket the pieces are getting too small for it being possible to divide the remaining buckets in the maximum number of pieces.

After I verified that this worked correct for sizes 5 and 6, I added a partial knapsack algorithm, to check if a partial partition (for a given size) could be used for all smaller divisions, in order to cut away large branches during the generation that will never lead to a solution. When I ran this on size 7, it found 210 solutions, which is much more than the 56 that I reported on August 19, last year. Of these 210 solutions, 146 contain a piece of size 60. This means that there are 64 solutions that do not contain a piece of size 60, which is 8 more than the earlier found 56 solutions. I still have to verified that all earlier found solutions are included in the solutions found today, to rule out an error in the latest algorithm. The first solution found (with a piece of size 60) is:

I started the program for sizes 8 and 9. For 8 it found five more solutions, besides the three already known solutions. All new solutions have a piece with size 105. The solutions are given below. I also verified that all earlier found solutions for 7 are included in the solutions that found yesterday.

At 20:24:37, I bought the book En liefde in mindere mate: dagboeken 1961-1987 written by Doeschka Meijsing in Dutch, edited by Ben Peperkamp and Annette Portegies, and published by Singel Uitgeverijen in 2016, ISBN:9789029539463, from bookshop Broekhuis for € 17.50. I got the book Gezien de feiten written by Griet Op de Beeck in Dutch and published by Stichting Collectieve Propaganda van het Nederlandse Boek in 2018, ISBN:9789059654334, for free as part of the Boekenweek. Coming Sunday, I can also use it to travel by train through the whole of the Netherlands.

Yesterday there was some light snow during most of the afternoon, but it did not stay on the ground, because the temperatures were too high. This morning, there was some snow and some of it stayed on the ground. Temperatures are very low for the time of the year. Two weeks ago, we also had a cold period. In both cases the cause is the same: high pressure over Scandinavia that transports cold air from the polar region to us. The maximum temperature at 2m was -0.7° Celcsius and at 10cm it was -0.1° Celsius. It seems we have hit record low temperatures today.

This afternoon, I ordered a Gigatron kit. On Friday, December 8 last year, I went to a presentation about the Gigatron TTL Color Computer.

I decided to use to Boekweek gift to go to Amsterdam. I first went to bookshop Het Martyrium. At 13:05, I bought the book The Trip: Andy Warhol's Plastic Fantastic Cross-Country Adventure written by Deborah Davis in English and published by Simon and Schuster in 2015, ISBN:9781476703510, for € 9.95.

Next I visited the Stedelijk Museum. I went to see the exhibition The Collection: Stedelijk Base. I saw (among many others) the following works:

Next I saw the exhibitions:

Finally, I visited bookshop Scheltema for about one and half hour. I did not buy a book.

At 11:00:10, I bought the book The Artist Interview: For Conservation and Presentation of Contemporary Art, Guidelines and Practice edited by Lydia Beerkens, written in English, and published by Jap Sam Books in 2012, ISBN:9789490322328, from bookshop Broekhuis for € 5.00. The book contains an interview with and some reproductions of works by Peter Struycken.

This evening, just after I arrived from work, a package with the Gigatron kit and the manual Gigatron Assembly Manual written by Marcel van Kervinck and Walter Belgers. I did not open the kit itself, but I have read parts of the manual.

This evening at TkkrLab, I started assmebling (soldering) the Gigatron kit. I found back my pair of scissors that I had lost on August 15. My plan with the assembling was to finish the first three steps after I had checked the contents of the kit, but I already started with Step 4: soldering the IC's. During the first step, two of the 40 capacitors dropped on the ground and were temporarily lost. Below a picture of the state at the end of evening. I plan on finishing the assembly on coming Saturday. During the evening, I also talked with Robert B. Lisek, who came to visit the space. 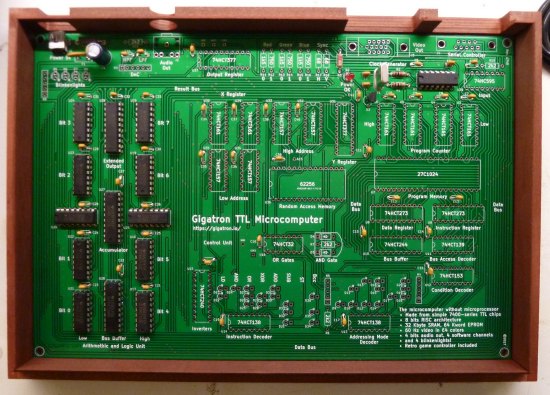 At 17:56:22, I bought the book Vreemdeling in een vreemd land written by Robert Anson Heinlein, published by Bruna in 1973, ISBN:9022990214, from charity shop Het Goed for € 0.50. It is the Dutch translation by M. Nicolaas-Lindeman and J.E.A. Andriessen-van de Zande of Stranger in a Strange Land.

At 12:24:12, I bought the book Positioning the art gallery: het Amsterdamse galeriewezen in een internationale context edited by Noor Mertens and Astrid Vorsterman with contributions from Jo Baer, Els Brinkman, and Peter Mason, written in Dutch and English, and published by Valiz in 2012, ISBN:9789078088394, from charity shop Het Goed for € 1.50.

Today was TkkrLab open day from 11 in the morning till four in the afternoon. Between showing vistors around, I finished soldering the Gigatron mircocomputer, which I started last Tuesday. After I did a final check, it worked the first time when I powered it on. Later, I discovered that in the racing game, the car does not start to drive. Maybe because one of the buttons of the controller is not working, or I had not have it plugged in well enough. Or I have to fix the soldering somewhere on the PCB.

Addition April 1: It seems I should have read the manual more carefull.