Today it is 56 calendar years ago that I was born, which means that I am born on a Wednesday. This is because 56 is twice 28 and it is a property of the Gregorian calendar that the days of the week repeat after 28 years (except when there is a century crossing involved that is not divisible by 400). I did not really celebrate my birthday.

Last week, I wondered whether it is possible to generate a possible infinite street tiling pattern without using back-tracking. I thought about starting with some row of a certain length and next generate rows below it as long as I wished. I was thinking about putting this into a JavaScript script inside a page and generate a random pattern on demand. I worked on a program to generate all impossible sequences to be found in a row and all impossible continuations from a part of a row to the next row. I think the program is correct, but I do not know how to convert the output into a state machine for generating a 'random' row below a given row. I even do not know if it is possible. Than it appeared to me that maybe Street tile patterns might be complex enough to be Turing complete.

Early this morning, I finished reading the book Walk Through Walls: A Memoir by Marina Abramović and James Kaplan (as ghost writer, it seems), which I started reading on October 14 after I bought it on October 11. I actually really started reading the book from October 24. I found this quite an interesting book, mind blowing at moments. It made me also realize how much I already knew about her, first through the book The lovers, which I bought many years ago and also read, and later also through watching some videos about her and her performances. She also talks about her personal struggles and the many retreats she undertook remote areas, with Australian Aboriginal peoples, at buddhist monastries, and with shamans in the amazone. Many of these she describes as life changing. She also descibes her struggles when her second husband Paolo Canevari leaves her, actually twice, to a women who described herself as a sexual anthropologist, a woman with dead-white skin and red hair. Betony Vernon matches this description and there are also photos of her together with Paolo Canevari. However, from 2004 to 2014, Vernon was married to Barnaba Fornasetti. Canevari met with the woman at the Givenchy show in 2008 and in 2010, Abramović talked with the woman against the will of Canevari after he had returned to her. The woman told her: "He's addicted to me. He will always come back to me." And that is what happened. Probably the woman understood male sexuality better than Abramović, that she could make this statement. 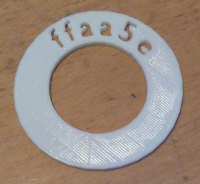 This evening at TkkrLab, another member made a bottle ring with the text ffaa5e with the of Blender and one of our 3D printers. The result is show on the top right.

I discovered that my statement about street tiling pattern of the first of the month is incorrect. When I increased the length of the sequences to be investigated (with this program), I discovered that it did not stop at what I had thought. It seems the list of impossible sequences and chains is infinite. (A chain consists of two sequences that match with valid tiles.) I studied the impossible sequences for a general pattern, but did not discover one. I did noticed that sequences and chains where not really symmetric and realized that this has to do with the encoding method of the street tiles, which all start with an 'A' in the left top corner. This gave me the idea to give each street tile its own encoding letters, using the following encoding: This resulted in only a limited set of chains (only with length two) to be impossible. But it seems that there are still infinite impossible sequences. I started visualzing the sequences with embedded JavaScript below and only leaving the characteristic sequences: It looks that for each length, there are only a limited number of patterns, if we look at the the depth at which the piece extend down. I have selected one pattern for each of them. I also worked on constructing a grammar (so far only a regular expression) to match all the patterns.

At 17:30, I arrived at charity shop Het Goed and looked around the book section. When I came outside around 17:50, my Urban HPV bike, which I got on Wednesday, March 9, 2011, was gone. I spend some time looking around, considering the possibility that I was mistaken about the place wheren I had placed it. I went inside to ask if it happens more often that bikes are stolen in front of the shop. They had only heard about an electric assisted bike being stolen. The bike was already getting old, but at the beginning of the summer the transmission had broken down and was replaced by a new one. I was counting on using it for another three years before it being replaced. I have not much hope of getting the bike back, as usually they are transported to East Europe and sold there. I did report the bike as being stolen when I arrived at home. I will miss all the extra things: The two horns (on a gift from Annabel, the other found in the attic), the three induction lights, and the two yellow CYBER stickers. 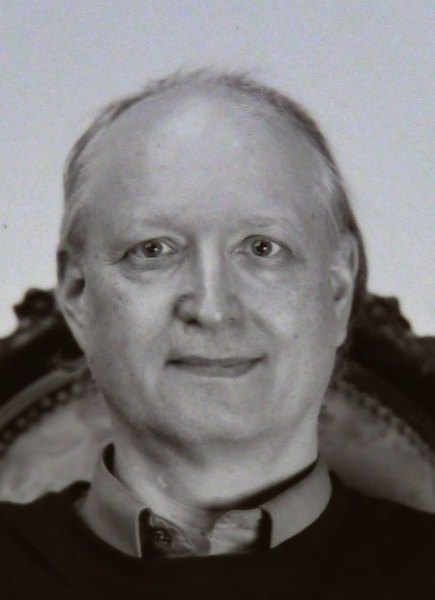 In the afternoon, I went to the AKI. Outside I ran into a friend, who in the past studied at the AKI. We decided to attend the open day together. First we went to the media center and library. Outside there was a table where the sold old catalogues for € 5. At 14:04, I bought the following two catalogues: At the photography department we looked inside the dark room, and the friend took a picture of me with the 8x10 camera on photographic paper. We went to dark room again, to see how it was developed. While it was being rinsed, we looked around the students rooms with paintings and other works of art. We did see some promissing work, but because the students were not pressent, it was not possible to talk with them. When the photograph was ready, it was scanned and I received a print (after it inverted). Two teachers were posing and giving assignments. I also made two 'drawings' with a brush and indian ink. I took some pictures of the teachers, especially when they were performing a slow motion dance. At the end we had our picture near the entrance holding a frame with the text: AKI OPEN.

Last month, I calculated the number of solutions for the HEMA puzzle, but what I had not taken into accound, was the fact that some of the wooden pieces of the actual puzzle do not fit, simply because the part that should fit in a 'gap' of another piece, is not small enough to fit. I made some analyses of all the possible combinations of pieces that require a physical constraint in all the solutions (using this program) and added that information below. I named the pieces according to the names given by Name that Color. (The name of the pieces is displayed as a tooltip in the displayed solution below.) You can indicate which of the pieces do not fit and see which solutions you can actually make. The initial values are for the my instance of the puzzle.

At 11:56, I bought the following booklets and map from charity shop Het Goed:

I had the opportunity to visit Utrecht for some hours. I went to bookshop Broese Boekverkopers and arrived there a few minutes before they opened at noon. I was the second customer entering the store. I looked around a little, and at 12:04:14, I bought the book Boud: het verzameld leven van Boudewijn Büch (1948-2002) (a biography about Boudewijn Büch) written by Eva Rovers in Dutch and published by Uitgeverij Prometheus in 2016, ISBN:9789035137424 for € 5.95. I looked around some more and found some interesting book, but decided to have a look at the bookshop Steven Sterk first. I did not buy anything there. I returned to Broese Boekverkopers and at 13:28:19, I bought the book The Philosophy of Andy Warhol: From A to B and Back Again written by Andy Warhol in English and published by Houghton Mifflin Harcourt in 2014, ISBN:9780547543437, for € 8.00. I also bought a Moleskin daily planner for 2018 for € 18.90. At home I discovered that it was the soft cover edition. I have used hard cover edition in the past years.

This evening, at TkkrLab I wanted to install MINIX3 on my notebook. Some weeks ago, I had made some attempts as well, but those did not work because the MINIX3 does not support USB. I had read somewhere that somebody used KVM to boot an ISO image. However, when I ran pacman, I discovered that my 32-bit Arch Linux installation is no longer supported. When I talked with some member, they noted that probably KVM does not work on my notebook, because most Atom processors do not support Intel® Virtualization Technology. And it appeared mine did not. There is still the option to use QEMU. I decided to at least start with a minimal installation of 64-bit Arch Linux. This months interesting links
Home | October 2017 | December 2017